Over the past 50 years, the Range Rover has come a long way from the original model that first claimed to be adding a dose of luxury to the SUV market. Initially designed so that you could hose the mud out of its interior, it is certainly not something we’d recommend doing with this latest model. 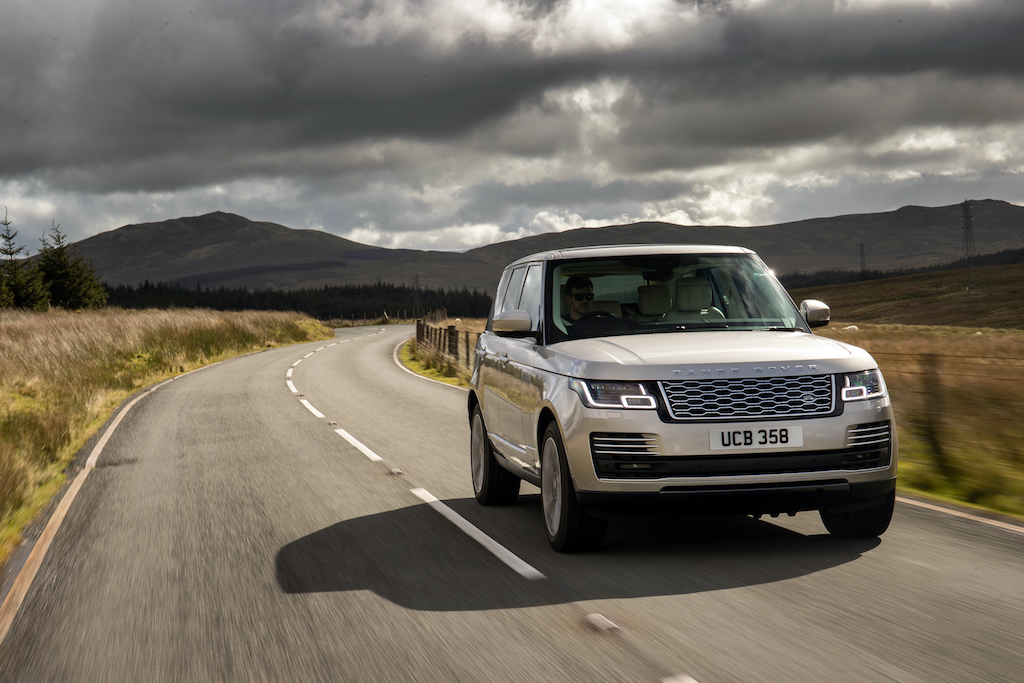 The debate rumbles on as to whether the Range Rover really was the first luxury SUV, but it certainly took a while for any European brand to create something that could truly rival the luxurious market.

If money is no problem, it’s fair to say a Range Rover is going to be one of the vehicles on your shopping list; especially one like this. Range Rover SVAutobiography Dynamic is arguably the epitome of a high-luxury sporty SUV and it is quite literally throwing shade on all the others. 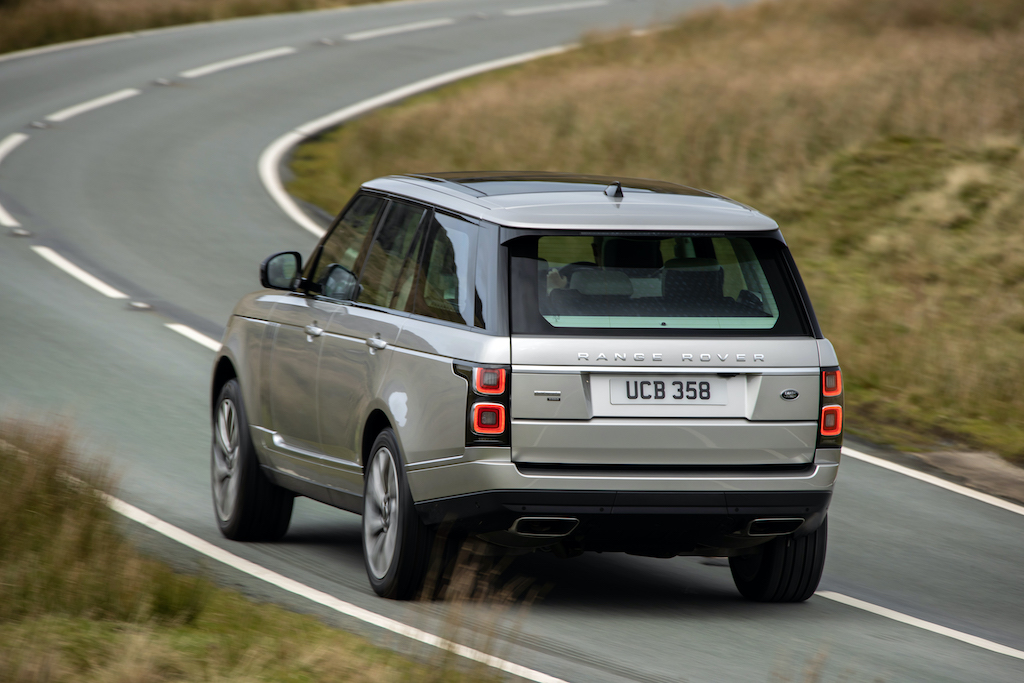 We say literally because this thing is a bit of an elephant in terms of its physical size (it’s bigger than all of those rivals) and its asking price is big too. Also, it takes a different approach to all of those rival models, not just because it’s British, but also because it’s supercharged and we love that!

So should the Range Rover SV Autobiography Dynamic be on your dream car list?  The SV Autobiography is the new Range Rover flagship model, which the company says is ‘exclusively handcrafted at the Special Vehicle Operations technical centre’ near Coventry.  It’s available in both short (known as SVAutobiography Dynamic) and long-wheelbase versions. The former is only available with a supercharged 5.0-litre V8 under the bonnet, while the latter comes with a choice of three engines: an SDV6 Hybrid diesel, an SDV8 diesel and a supercharged V8 petrol engine.

Almost eight years after its introduction, the design of the Range Rover is still glorious. Unapologetically square-edged, with some technical looking graphic elements that have kept it fresh over the years. And of course, this SVAutobiography Dynamic model looks even more desirable than most Rangies, with a more aggressive look to it. 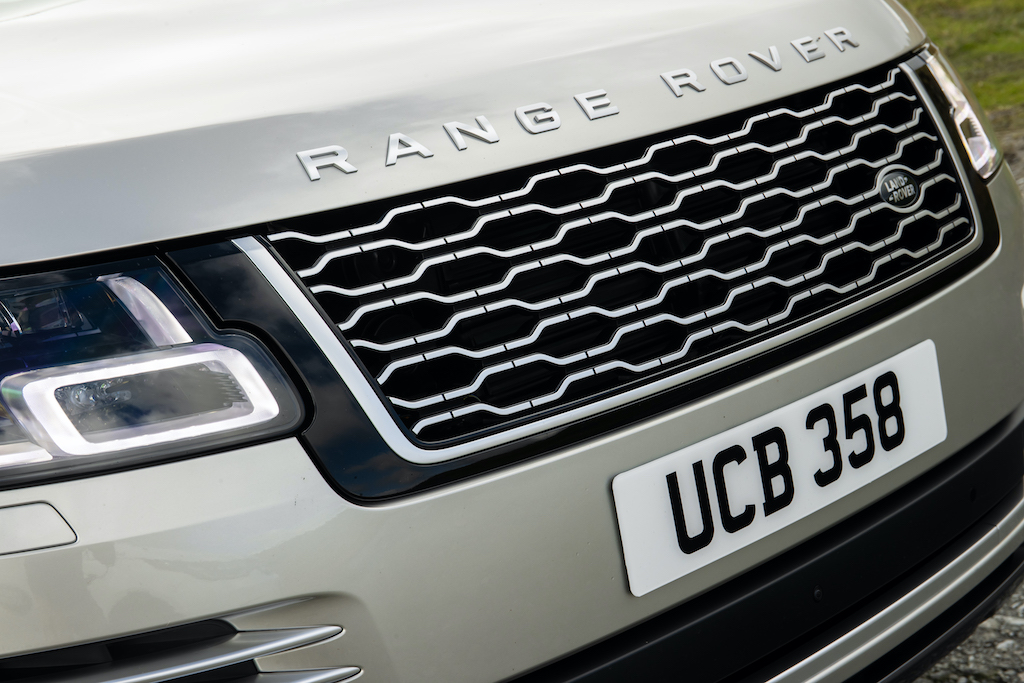 The model we tested had a different front bumper treatment that is less fussy and new headlights and inlays that are more modern and somehow robot-like. The grille is different as well, with a bit of an AMG diamond-style inspiration, to my eye at least.

The headlights have come a long way over the years, with these ones being ‘pixel-laser LED’ headlights with daytime running lights. There are also front fog lights, and the rear has LED tail-lights as well.

There are still the lovely shark gills on the side of its tall body, while the big glasshouse look has aged exceptionally well. 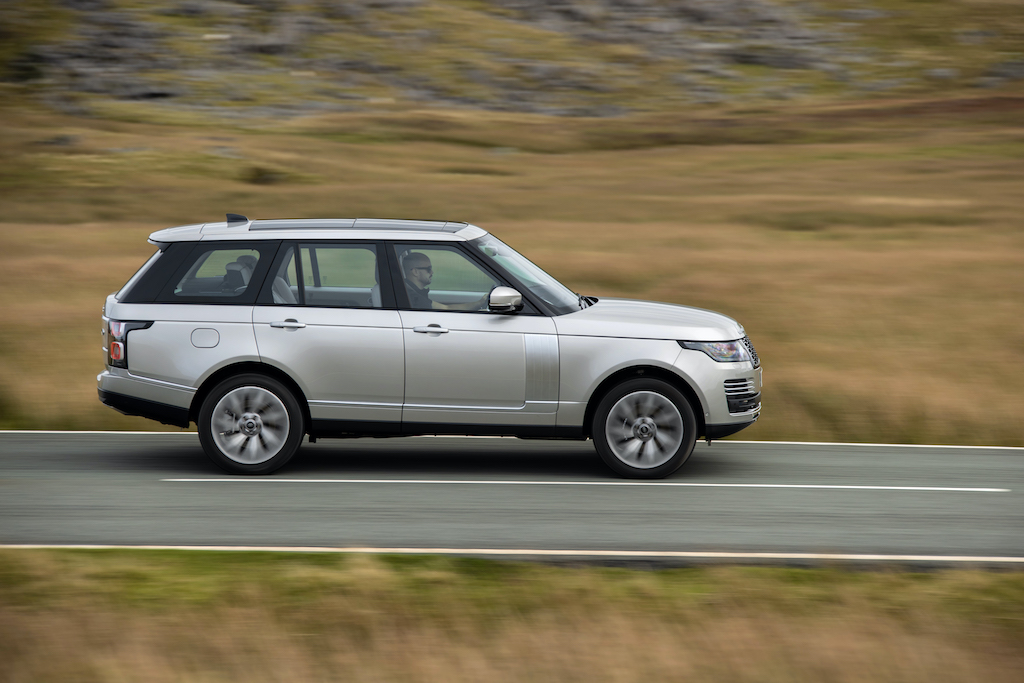 The SVAutobiography variant incorporates a standard “Narvik Black Contrast Roof and mirror caps”, so you don’t have to pay for the two-tone look, and there are also model-specific integrated metal tailpipe finishers too. That’s in addition to chrome badging with black knurled elements and lettering on the badges, side accent graphics, bright chrome door handle surrounds and a black tailgate finisher.

In terms of dimensions, we’ve always thought the Range Rover looks bigger than it actually is, and that comes down to the angular nature of its lines. It is only (yes, only) 5000mm long on a 2922mm wheelbase, but it is 2073mm wide and 1861mm tall, which is why it has such a muscled, broad-shouldered look.

Does that translate to a luxurious and spacious cabin experience?  The leather quality and trim is excellent, and the comfort of the seats is excellent.

In the front or the rear? Backseat space in the SVAutobiography Dynamic model is not that good, either. With the driver’s seat set for most of the person, and with myself slid in behind, my shins were close to touch the seat in front… Plus the media screen that sits in front of the rear passengers eats into the space quite a bit, and it made me feel a little claustrophobic.  A bit weird, in a car this large. 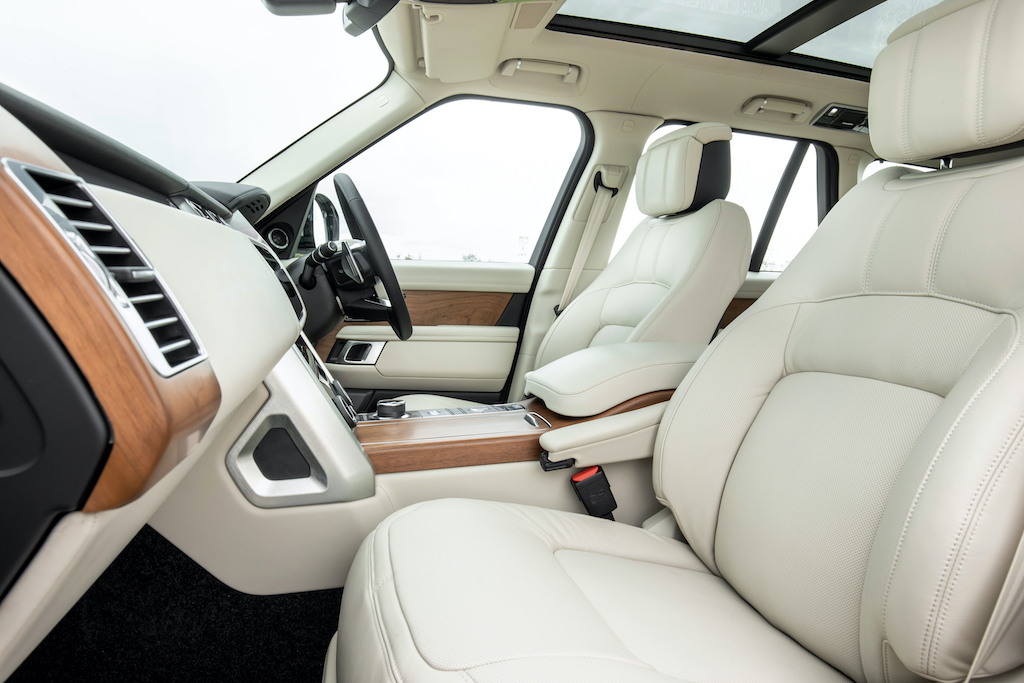 The S-Class is more refined and comfortable, but it can’t challenge the sense of light and space of the Range Rover. The most obvious change compared with the standard Range Rover is the SVA’s dual rear seats and substantial centre console arrangement. The console stores a pair of fold-out aluminium tray tables and has a refrigerated locker that can take two tall glasses and a small bottle. 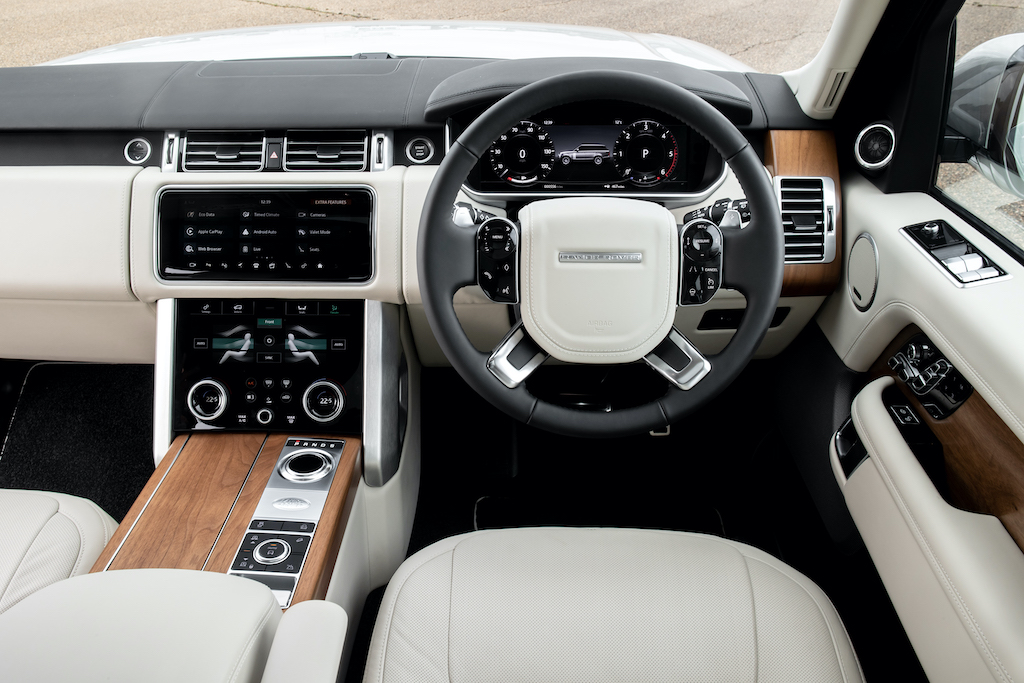 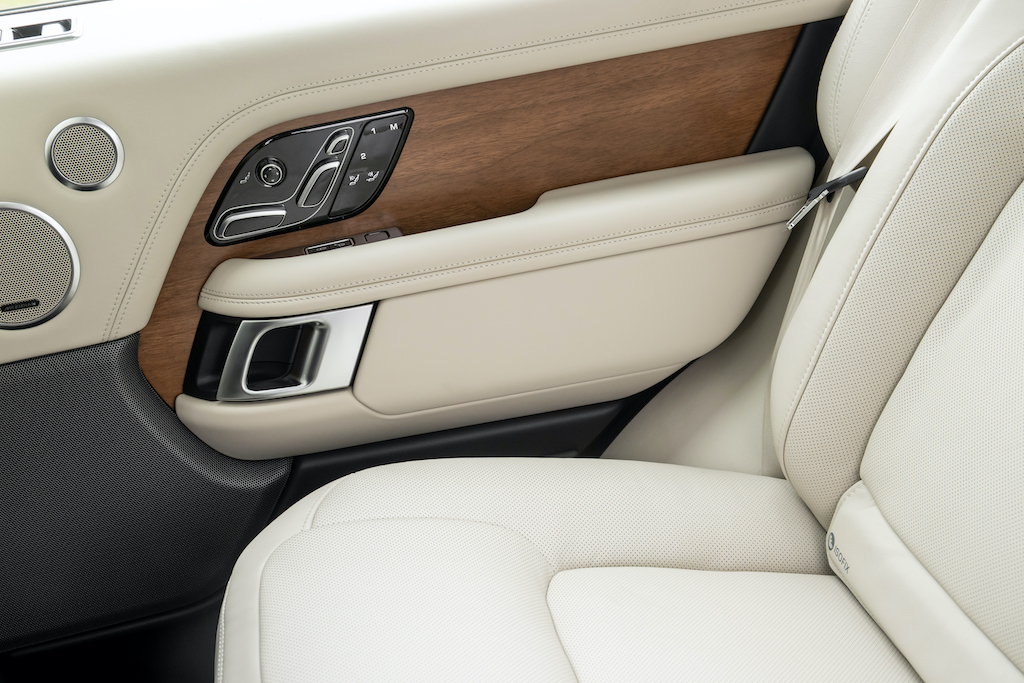 Inside there is plenty of luxurious touches adorning the cabin including, four-zone climate control that can be remotely controlled, heated steering wheel and rear seats, ventilated front seats, massaging seats, and a 10.2in touchscreen infotainment system complete with DAB tuner, sat nav, Bluetooth, USB connectivity and a TV tuner. The long wheelbase version gains perforated leather seats, a heated wood and leather steering wheel, folding tables in the rear, a bottle chiller and electric sunblinds.

It runs a 5.0-litre petrol V8 supercharged engine, with outputs of 416kW (at 6000-6500rpm) It has an eight-speed automatic transmission, and it runs permanent all-wheel drive with a twin-speed transfer box for high (4H) and low range (4L).

The sound of this motor is beautiful as a symphony! It makes you push on the accelerator just to hear it louder. 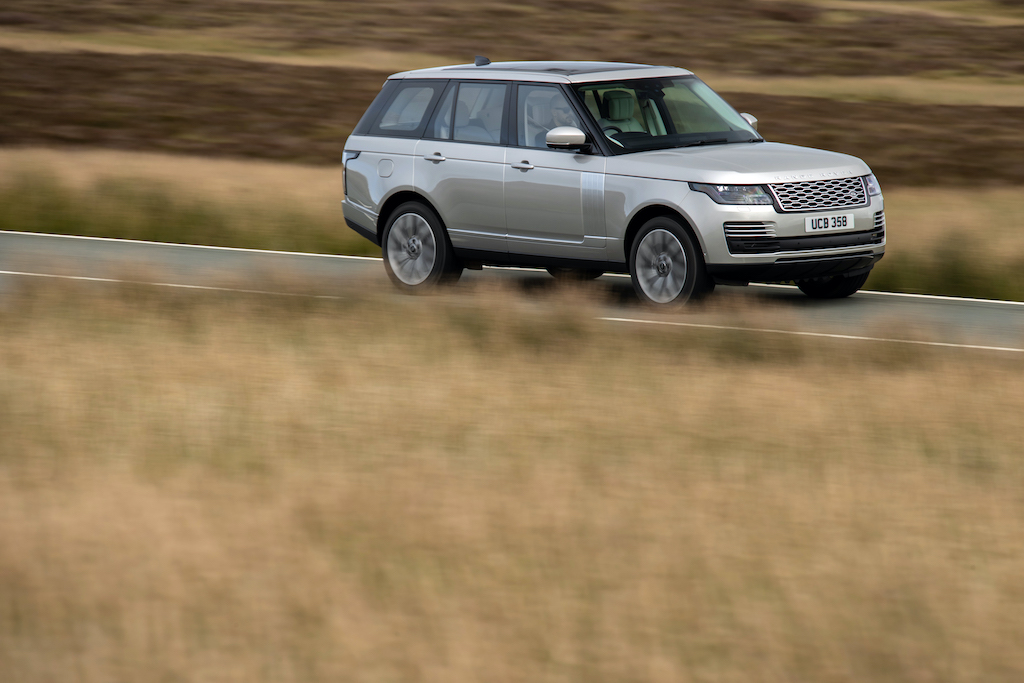 The claimed fuel consumption is 12.8 litres per 100 kilometers, and I saw 13.5L/100km during my week with the car. So globally good when you think about the driving pleasure you have. The howl from under the bonnet combined with the raucous woofing of the exhaust is almost encouraging enough to make you forget about road rules.

It can jump from 0-100km/h in just 5.4 second! The latest Range Rover may look more black tie than green wellies, but its designers have moved mountains to ensure that it can still move up mountains. This all-terrain agility comes despite serious efforts to make it more car-like than ever on the open road, where, Land Rover wisely acknowledges, the majority of Range Rover owners will spend most of their time. 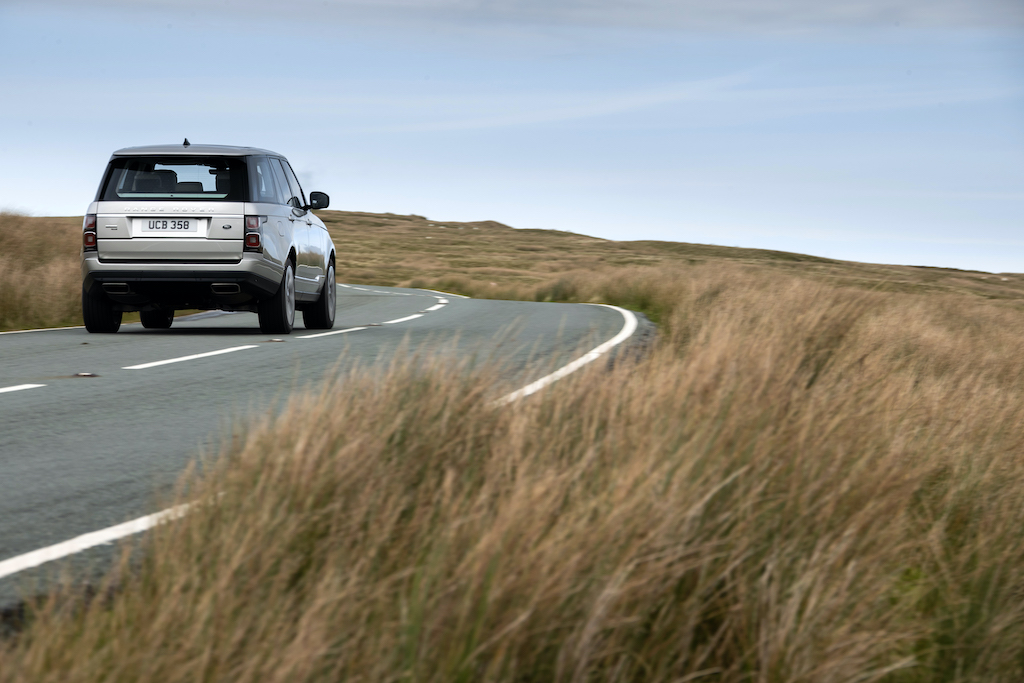 We can see why you’d buy the Range Rover SVAutobiography Dynamic over some of its competitors. You probably haven’t even considered the competitors, in fact. I get it. This thing is awesome!

It’s great to drive, very luxurious, and has heaps of performance. It’s expensive, yes – but if money is no object… just get one.