The Audi Q4 e-tron is a family all-electric SUV, which takes on alternatives such as the Ford Mustang Mach-E, the Kia EV6, the Hyundai Ioniq 5, and of course the Volkswagen ID.4 and Skoda Enyaq – both of which are mechanically identical underneath. 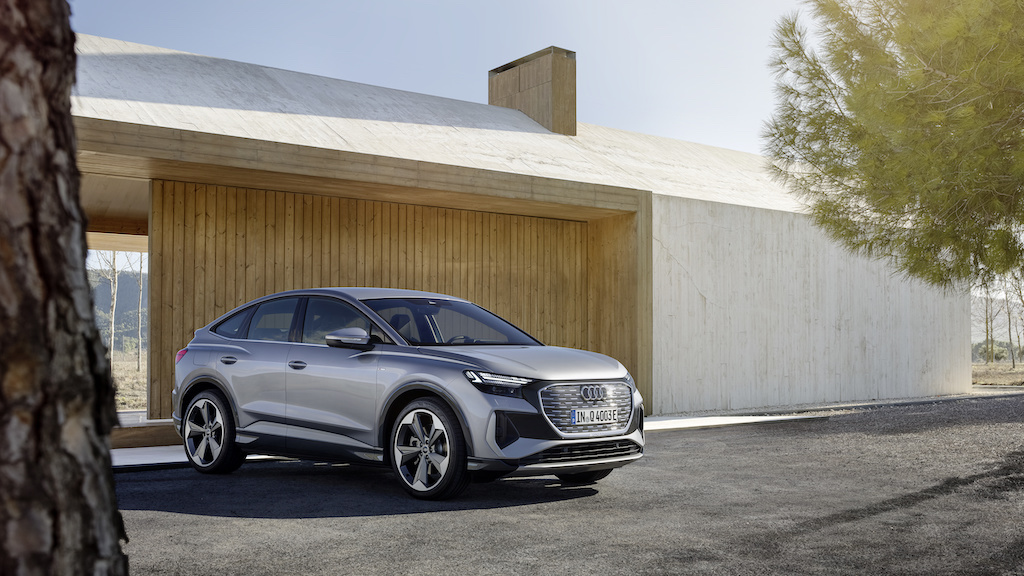 But the Audi Q4 e-tron could well be the car that convinces you electric vehicles are more than just a niche choice – and you’re likely to see a lot of them on the road. Indeed, the German brand is predicting that this large, fully electric SUV will quickly become the second-best-selling Audi model. 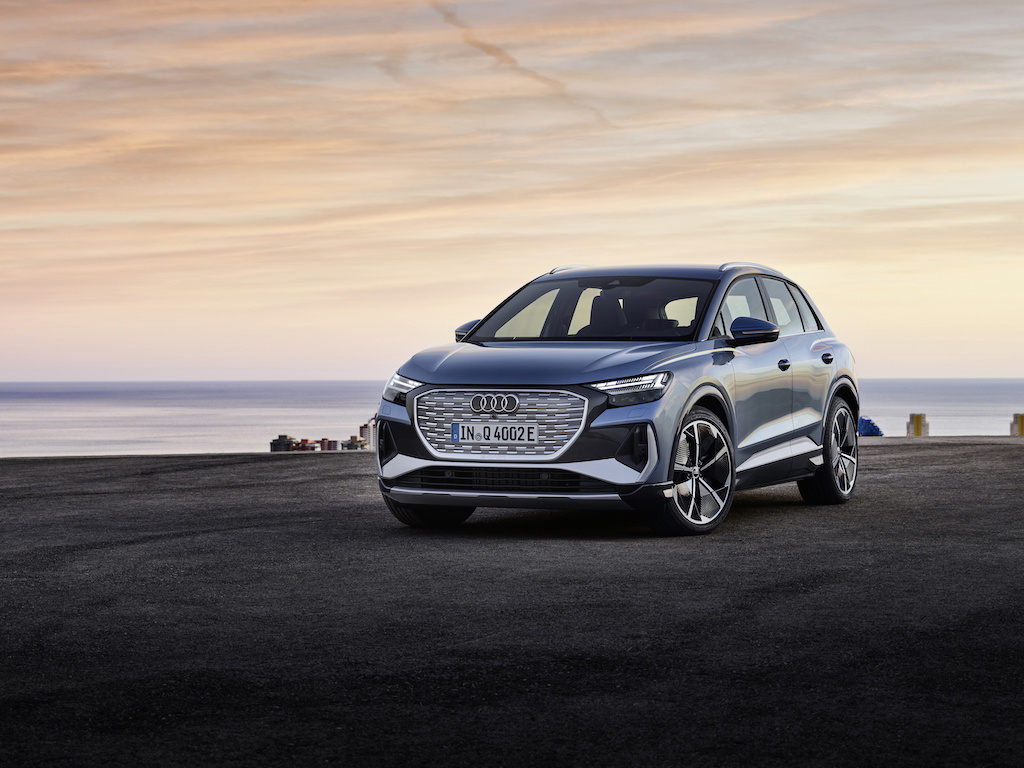 It’s a pretty good-looking car in either form. The nose is very upright and cliff-faced, with the usual massive Audi grille (although, of course, it doesn’t actually need a grille…) and it looks rather more chiseled than the softer, rounder-looking Volkswagen ID.4.

You get smart-looking LED headlights, big alloy wheels that run from 19 to 21-inches, and the slope-roofed Sportback definitely cuts a bit more of a dash on the road. 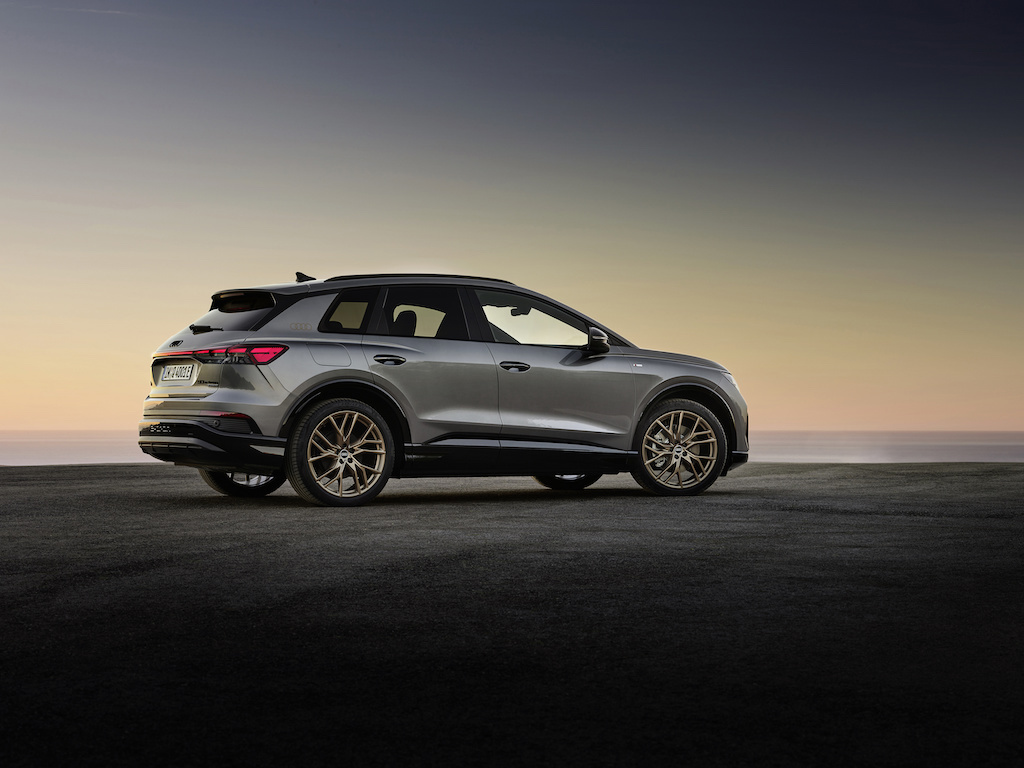 Inside, it’s all very contemporary Audi – expensive-looking materials, a big 10.1-inch touchscreen in the middle, and a digital instrument panel that’s the same size to make sure that the cabin is very modern. Overall the cabin lives up to the badge’s premium billing. 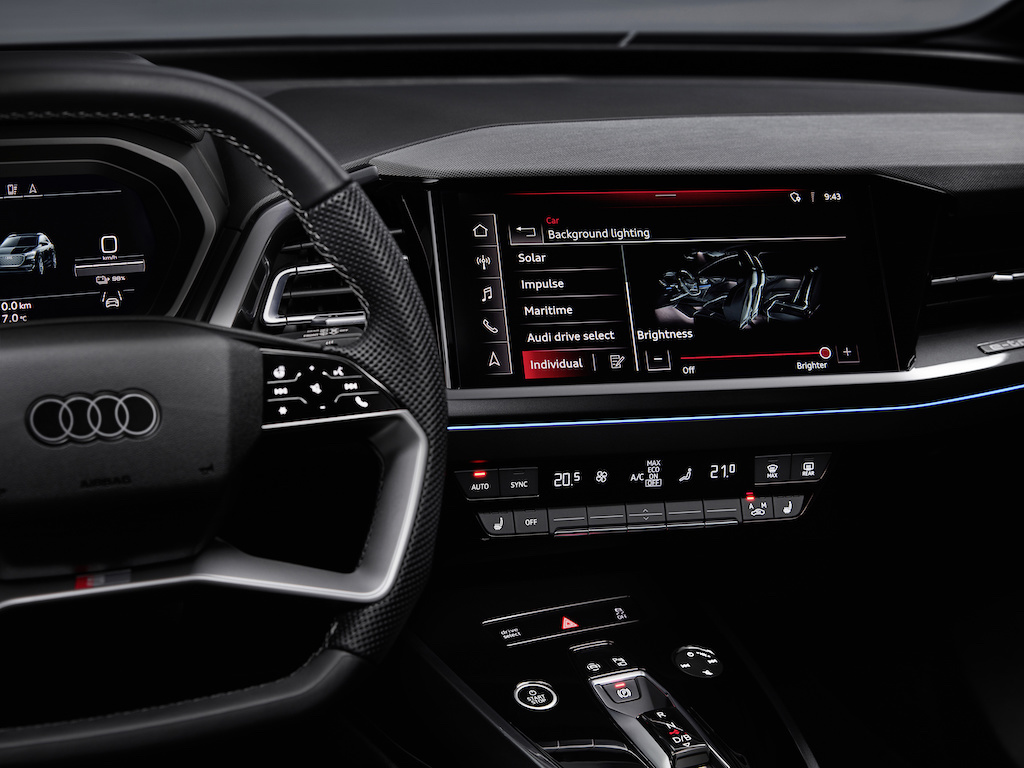 You also get a DAB radio, built-in navigation, Apple CarPlay and Android Auto smartphone mirroring, two USB-C ports and a three-year subscription to online services such as Google maps, and weather and hazard alerts. Amazon Alexa is integrated into the system, allowing you to manage calendars, shopping lists and your Amazon smart devices at home, all through voice commands. 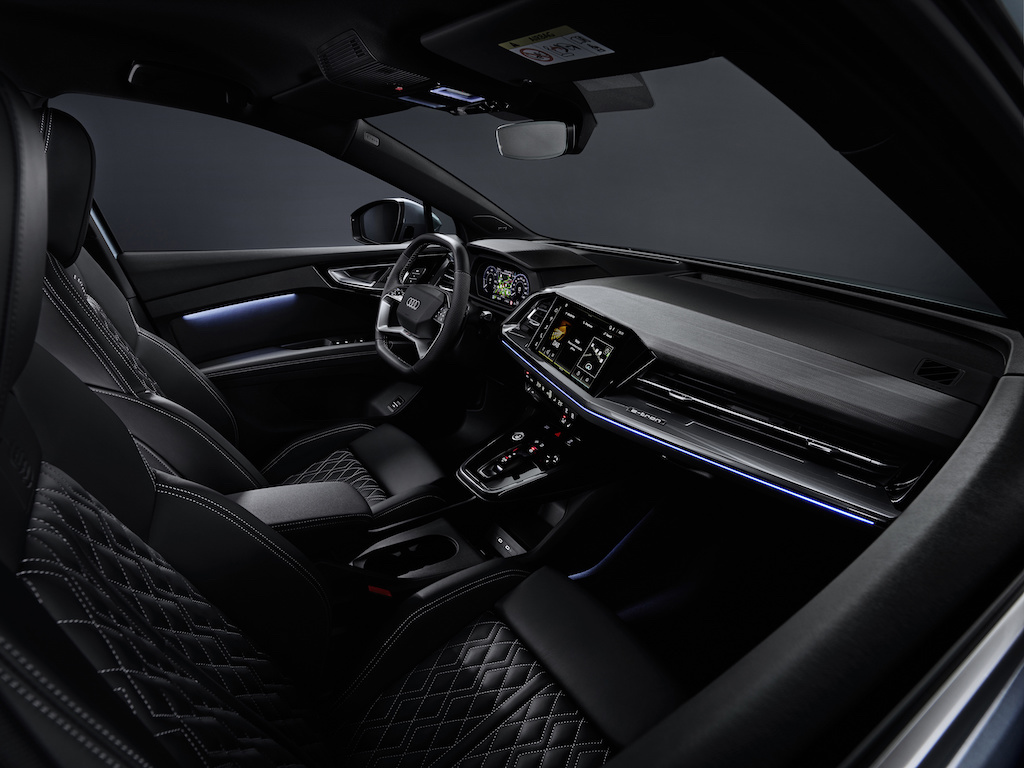 An excellent 10-speaker Sonos premium sound system with a 580-watt amplifier is available as part of the Comfort and Sound Pack, and because the Q4 is so quiet at a cruise you can really appreciate the difference between that and the regular eight-speaker set-up.

Still, the good news is that cabin space is generally excellent — the flat-floor layout (the batteries are underneath) means that rear seats are properly roomy. With 520 litres of bootspace, the load space itself is still nice and flat, and access is easy enough. 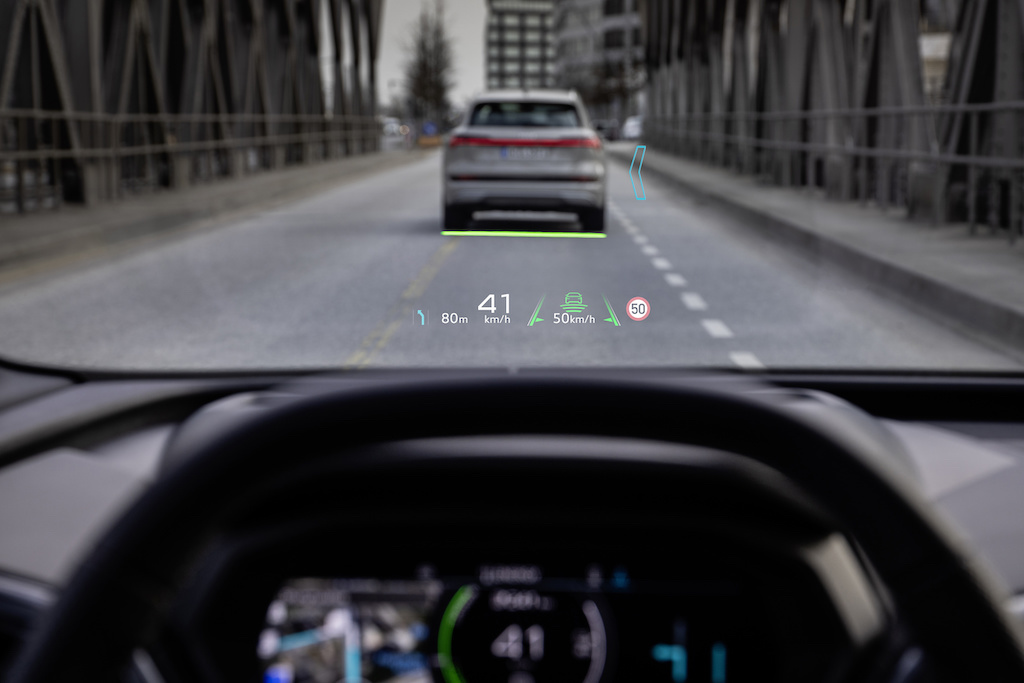 You might think complaining about not having electric-adjust seats in your posh German SUV is a first-world problem, but, really, a car like the Audi Q4 40 e-tron should have those!  At least it’s still pretty easy to get comfy, even with the manual-adjust seats. They’re good and supportive too.

At least those in the back get some decent space — very decent, in fact. The flat floor means that there’s loads of room for feet, and plenty of knee and headroom too. Only the very tall passengers will have any issue with the space on offer. 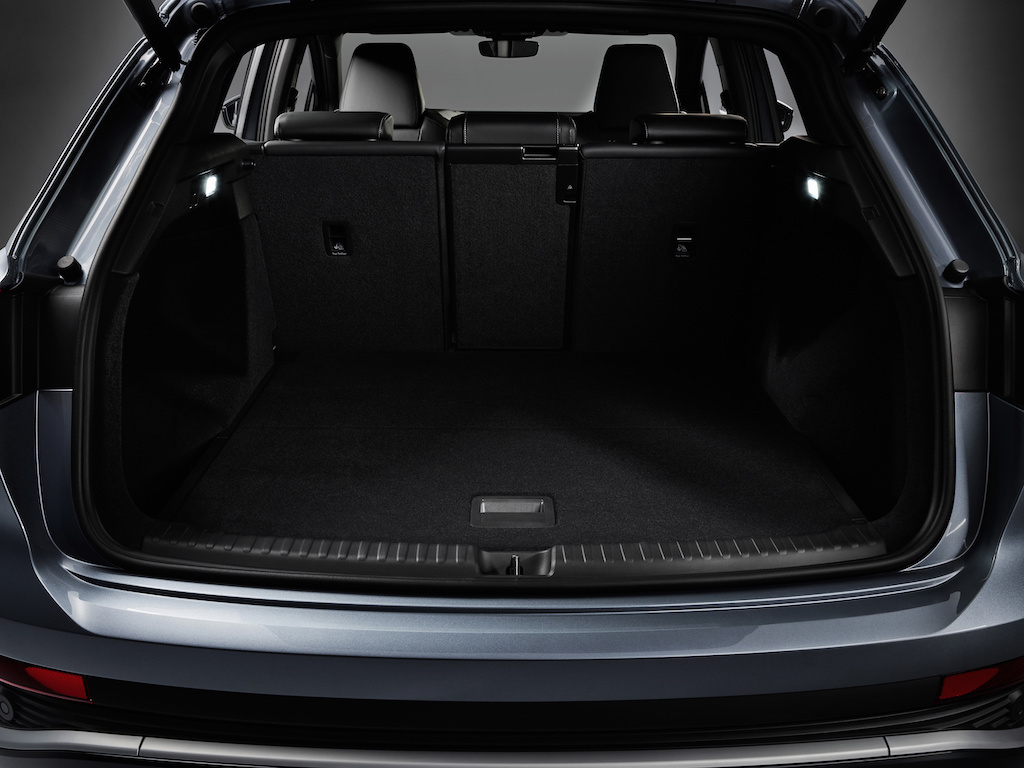 There are good-sized cupholders, and door bins though, although again the storage box under the arm-rest seems oddly small. Rear seat passengers also get decent door bins, and seat-back pockets.

So far, I’ve driven the mid-level 40 . The 40 has 201bhp, rear-wheel drive and an 8.5sec 0-100km/h time. That’s slightly slower than the equally powerful Audi Q5 45 TDI diesel, but if anything, the Q4 e-tron feels quicker in everyday driving. It surges forward almost instantaneously when you put your foot down instead of requiring time to rev up or change down. 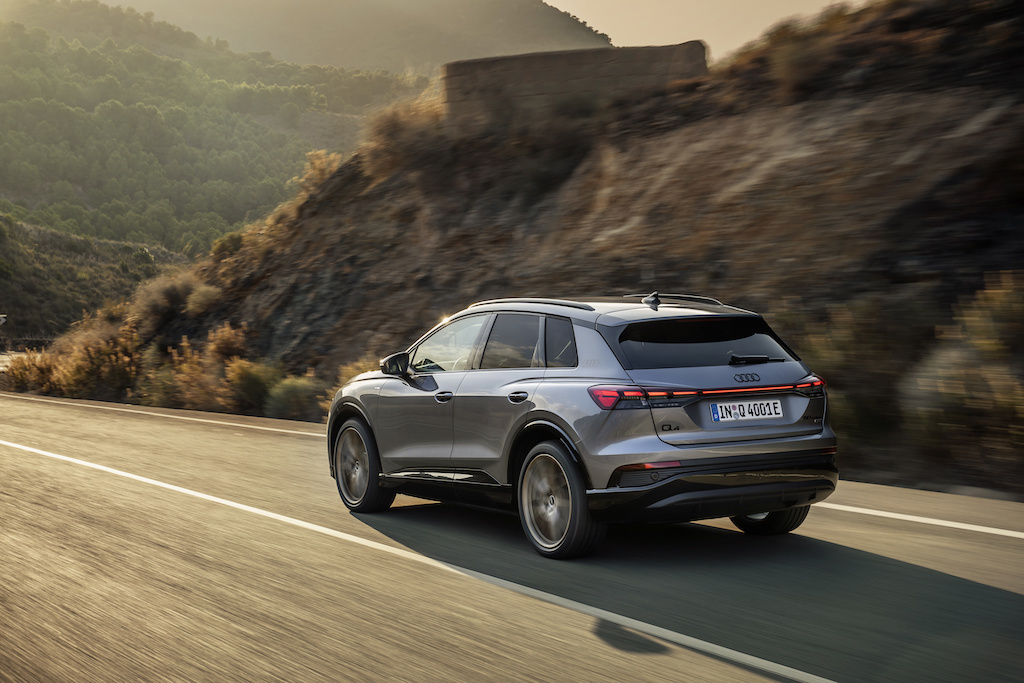 Visibility is good, although the rear pillar is rather big and the rear screen a little small. A parking camera can help with that, but it’s on the options list so you’ll have to make do with the standard-fit rear parking sensors instead. 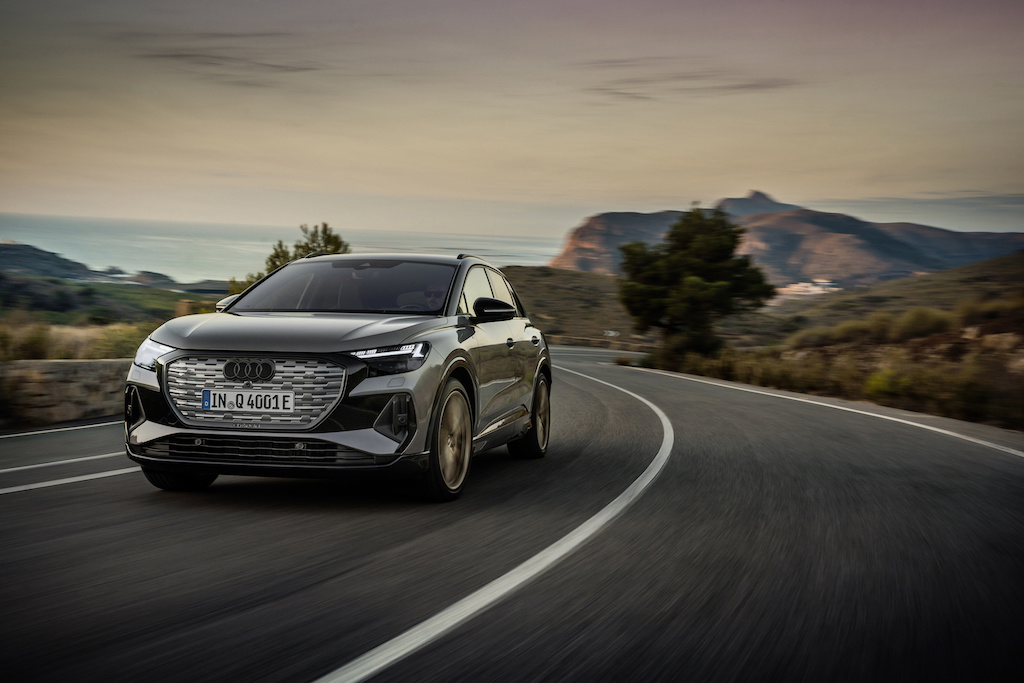 The Q4 generally feels supple around town, plus it breathes with the road at higher speeds, without ever becoming floaty. The other reason that the Q4 doesn’t feel big and cumbersome to drive is that the steering is light and accurate, making it easy to guide around town. The turning circle is pretty tight, too, which helps when you’re trying to get it in and out of tight car parks.

On the upside, the Q4 is comfy and refined. That weight, and carefully tuned suspension, means that it rides smoothly even on the optional big wheels and even when you go for the sportier S-Line model that get a stiffer set-up. 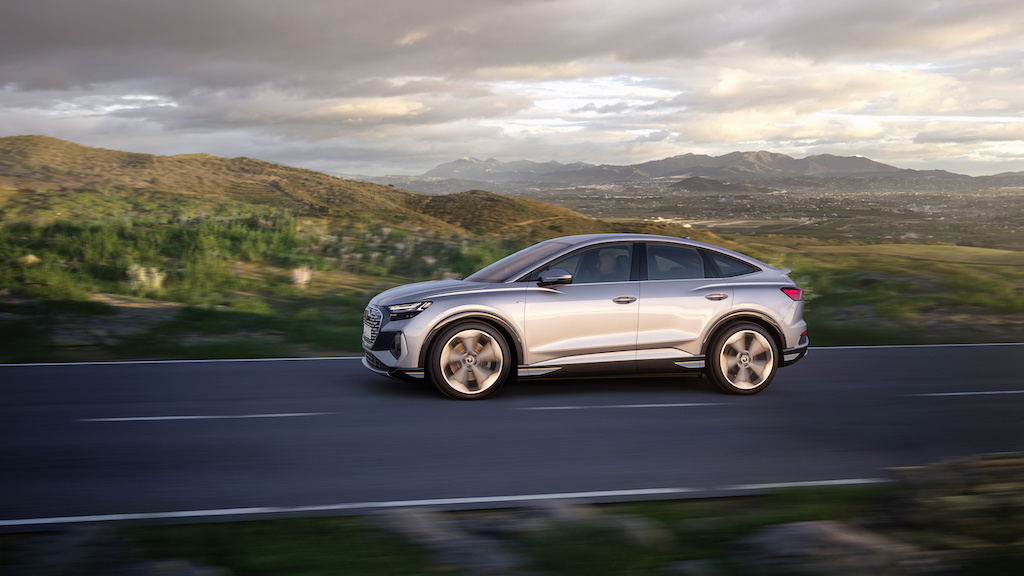 It feels significantly classier than most of its rivals.  The Q4 ’40’ e-tron offers the best balance between range and performance. You should go for the S Line trim, but with a few optional extras added in.  It’s also very well priced – at least compared with other premium-badged electric SUVs such as the BMW iX3 and Volvo XC40 Recharge.