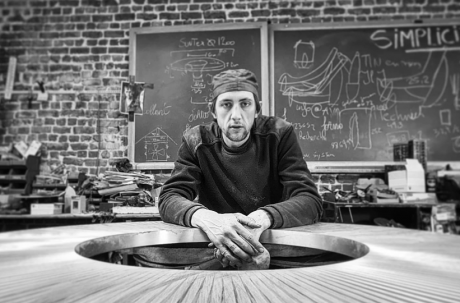 The young man welcomes us in complete relaxation, a hat on his head that lets his long hair stick out. We are at his home, in the green suburbs of Brussels. A small family home, adjoining various artist studios belonging to other members of his family, provides a safe cocoon where this self-taught artist works.

Yann creates contemporary furniture, made-to-measure, unique objects. He does not want to reproduce, he likes to create instinctively and assumes these choices. Working alone, he describes his art as a game, an assumed relationship to the freedom of childhood. The references to organic, planetary or geological forms come from his imagination, without prejudice. More than a collection of tables or seats, he creates here a coherent work that mixes functionality and art, object and subject, tradition and innovation. 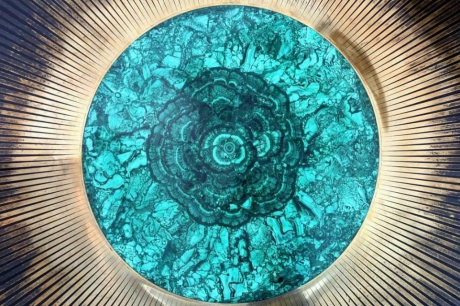 Yann is partly inspired by a Belgian design movement of the 70s which confronted several materials such as brass and semi-precious stones. He is undeniably today the new breath of this movement, being one of the first designers to really ask the question of form, for form’s sake, being very little interested in the function of the object.

For him, the ultimate dream would be, he says :

To make a table that we would look at as a vibrant sculpture, and not as a simple table

Yann develops free and instinctive work that questions us about the real place of design in art.
In Europe, since the beginning of the 20th century many artistic movements have been inspired by the relationship between arts and crafts. 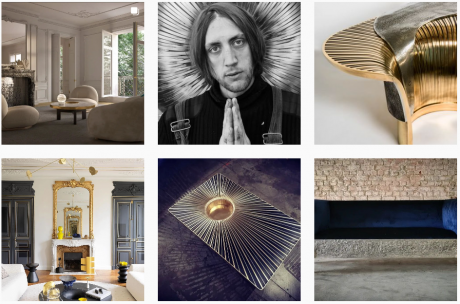 An artistic proposal based on simplicity and the use of natural materials. A movement that inspired designers like Henry Van de Velde and movements such as Art Nouveau, Jugendstil, the Viennese Sezessionstil movement and indirectly, in its foundations, the Bauhaus movement. It can also be seen as the prelude to modernism, where its pure forms, stripped of historical associations, were applied to industrial production. 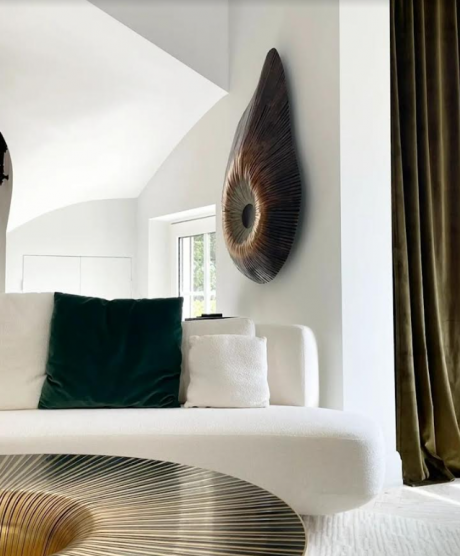 A Belgian mineralogist and blacksmith design

In Belgium too, from the 1960s, this movement was to experience growing success. Interest in this Belgian movement of the 70s which inspired Yann began in the 60s, a period when design in Brussels and Belgium was marked by an increasingly refined and luxurious visual sophistication.

Thus begins a period marked, for example, by furniture worked in blackened tripods or cast aluminum with table tops in polyester resin completed with inclusions of minerals such as Marcasite, Agathe, Malachite, ‘Slate or Fossilized Wood.

Inspired by the work of Gustave Klimt, among others, the Belgian Designers of the time such as Ado Chale, Jean-Claude Dresse, Armand Jonckers, Jules Wabbes, George Mathias and many others, began to compose hard stone mosaics and working brass trays on which they amused themselves by engraving all types of geometric or organic designs and ornaments.
It is by discovering their work that Yann develops in him the desire to work with these materials. 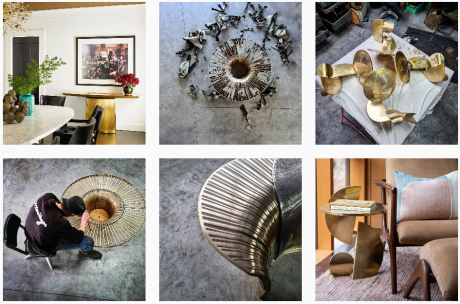 Yann explains: “ It was my meeting with David Deroy that made me discover this universe, this movement, in which I felt this mastery of light that attracted me so much. Thanks to this, the feeling of wanting to go further animated me to deepen my knowledge. I started wanting to embellish objects from nature like seashells. I circled, this one, with steel tubes that I then gilded by hand, not yet knowing how to work non-ferrous metals like brass… I was not happy with the final appearance… For me , it was too approximate… It was then that my father offered me a real welding machine to solder the materials I liked. I got into it seriously, then, with a lot of patience and research, I finally learned to specialize in the manipulation (other than welding) of these materials ”. 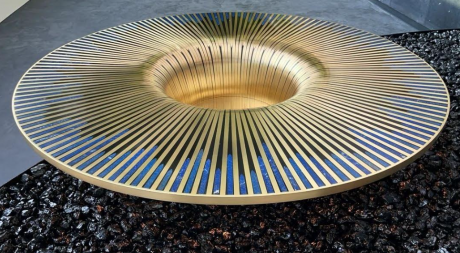 Dogs are not cats

Born in Brussels, to a welder-craftsman father and a mother passionate about art and architecture, Yann Dessauvage has been immersed since his earliest childhood in a world influenced by creation. The discreet artist confides: “My mother has always had a passion for architecture as well as a particular attachment to artistic movements such as Art and Crafts, Art Nouveau and Art Delco. She’s an incredible woman, in her house, she let me take over a workshop when I was a kid. This piece helped me a lot during my youth, having trouble channeling my energy. So, in this place, when I concentrated on fabrications emanating from my mind, without really artistic aspiration at the time, it calmed me down”.

The family as cement of Yann’s work :

My father transmitted to me his vocation for welding and metalworking, a vocation maintained by his adoration of motorcycles and their mechanics 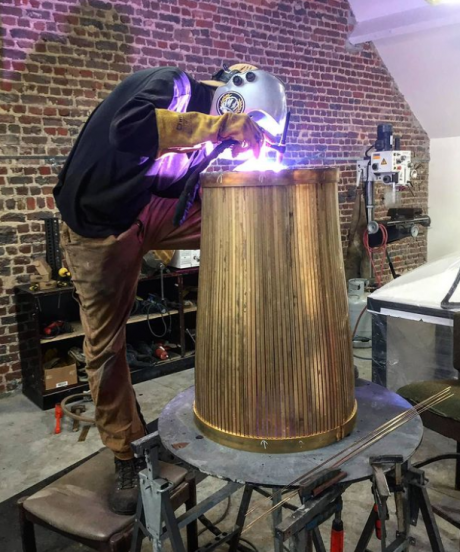 The artist of a handmade, with the eyes of a child

A child who was alert and curious about his surroundings, Yann learned very early to be interested in objects. This discovery will be made in a sales depot frequented assiduously by his mother. It is in this cave of Ali Baba that Yann weaves a special relationship with materials, shapes and colors. At eight years old, already emanates from him, an ardent desire for creation. He says, mischievous: “In my childhood neighborhood, my mother always used to go to a consignment store where she took me from a very young age. It’s a place where I could spend hours in the inventory playing and already imagining myself creating fascinating objects”.

Little by little, Yann became more and more interested in the provenance of the objects around him, the material and the work it took to make them. At the age of sixteen, Yann worked in metals for the first time by taking welding lessons. He then understands very quickly that the general school cycle will not suit him and leaves the classical school. The young man, eager to put his hands to work, decides to take a professional training course that will allow him to practice mastery of ferrous metals at will. 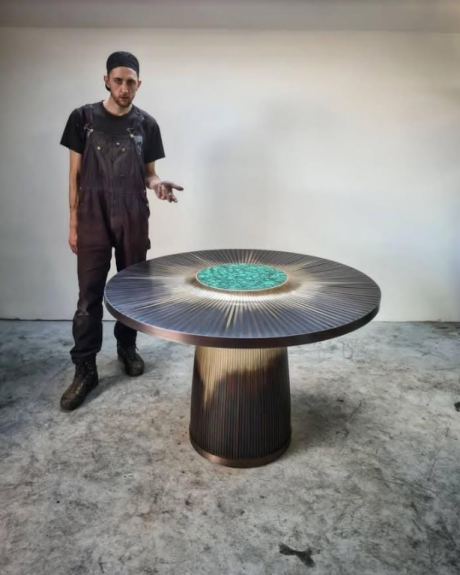 A sales consignment, as a place of initiation to design

With his diploma in hand, Yann, then aged 19, still remembers the wonder experienced in the sales depot frequented by his mother. Listening only to his heart, he goes there to ask to work there. He left for 6 years of on-the-job training, in this store located in the heart of the European district of the Belgian capital. Gradually, through this first professional experience, Yann’s interest in art grew and his knowledge developed each time a new object entered the store.

Yann confides to us, smiling: “It was electric, every day a little more, I wanted to create objects myself, I wanted to make it my life. Deep in my flesh, I felt that this job was going to allow me to travel in my own reality”. 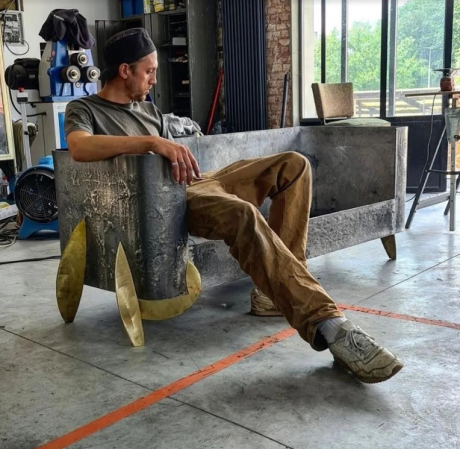 In addition to his work in this store, Yann discovers and frequents flea markets and
chips in his free time. He says: “It was when I met two second-hand dealers, Frédéric Rodhius and Jacques Nonnon, who later became close friends, that my eyes sharpened… Thanks to their advice… To their great culture… I been able to refine my view of the materials and the work of the objects“.

Light as an obsession

Following this, Yann’s sense of detail and finishes sharpened, until it became a real obsession in the rendering of each of his creations. The man is obsessed with the finesse of the play of light, the way it rolls over the curves of furniture, accentuating the idea of a certain fluidity in the volume.

Light is everything in the end, it is essential in my work, it is what defines what we see and the interpretation that we then make of it

Since then, Yann’s work has traveled to the four corners of the world, even if he does not attach great importance to it, busy as he is in his quest for the perfect object. It is distributed by Studio Van den Akker, which offers a collection of bespoke furniture, lighting and architectural products primarily in the US and Canadian markets.