A few years ago Citroen decided to spin DS off into a separate brand. Building a premium brand from the ground up is one of the hardest challenges a car maker can face. With no existing brand loyalty or USP to rely on, manufacturers have to make a powerful statement when they come to market. But up to now DS has been selling only facelifted versions of the cars that were born as Citroen DSs. 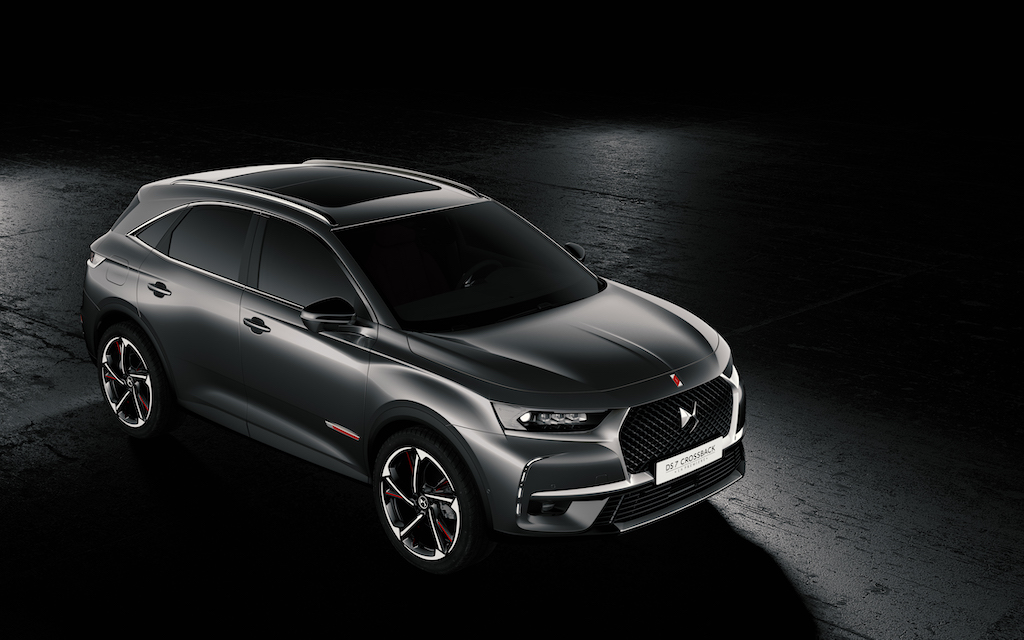 That DS’s first in-house model is an SUV is no coincidence, either. The C-SUV market is where the money is, after all, and offers DS the best shot at turning a tidy profit. That said, the newbie French brand isn’t planning on limiting itself exclusively to SUVs: the DS 7 Crossback is the first in a line of six different models that will be released over six consecutive years, with electrification set to play a key role in the brand’s future offerings.

It’s a large SUV and, like a number of its rivals, makes use of a big, stylish front grille, wide air intakes and a high waistline to give a dominating aesthetic. The 7 Crossback is also available with an active suspension system, which comes as standard on more expensive models. Until now, systems like this have only been available on pricier premium models.

Forget the race-car. DS isn’t at all about sportiness. It’s a comfort thing. That squishy road-reading chassis, the driver aids, the plush cabin, a longer wheelbase than the class norm to get more back-seat space. You get the picture. Deep breath… et relaxer 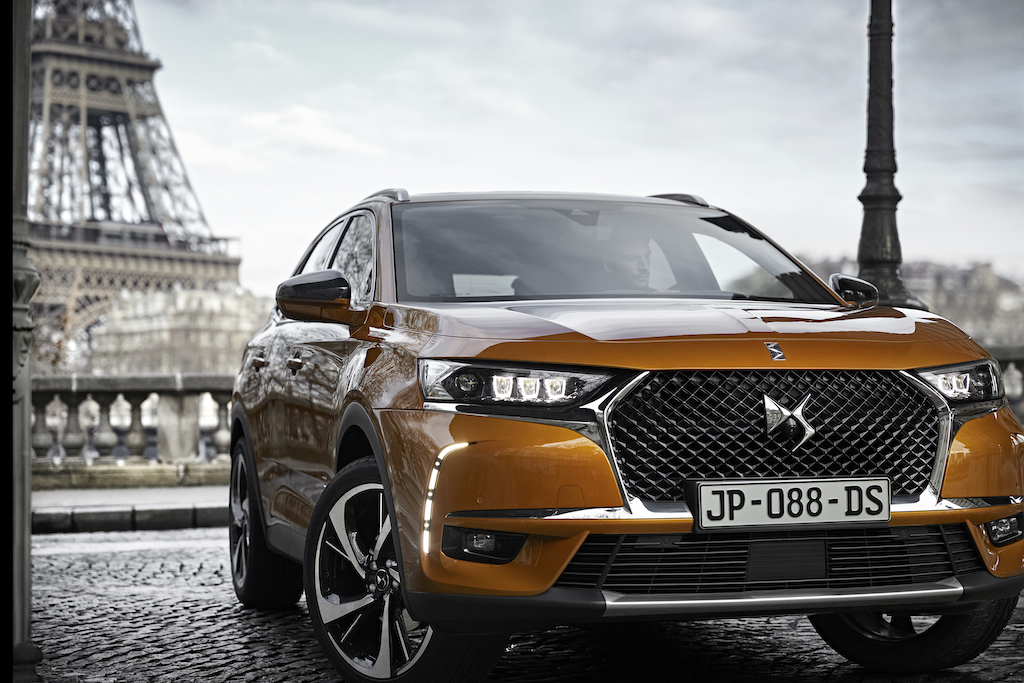 This new DS 7 Crossback is a handsome car – but, underneath some eye-catching window dressing, at least, it’s certainly not an original-looking one. The design should have been a bit more adventurous and mould-breaking than what amounts to a facsimile of an Audi Q5 after a change of war paint. By the way, we think the DS 7 Crossback looks sharp in pure white!

LED light modules within the intricately detailed headlight housings rotate through 180 degrees as part of a light display when you unlock the car. It’s gimmicky but likeable.

Size-wise, it sits towards the larger end of the compact SUV pack, measuring 4570mm in length.

Unlike its exterior, the DS 7’s cabin displays a touch more of the avant garde spirit its maker professes to epitomize. 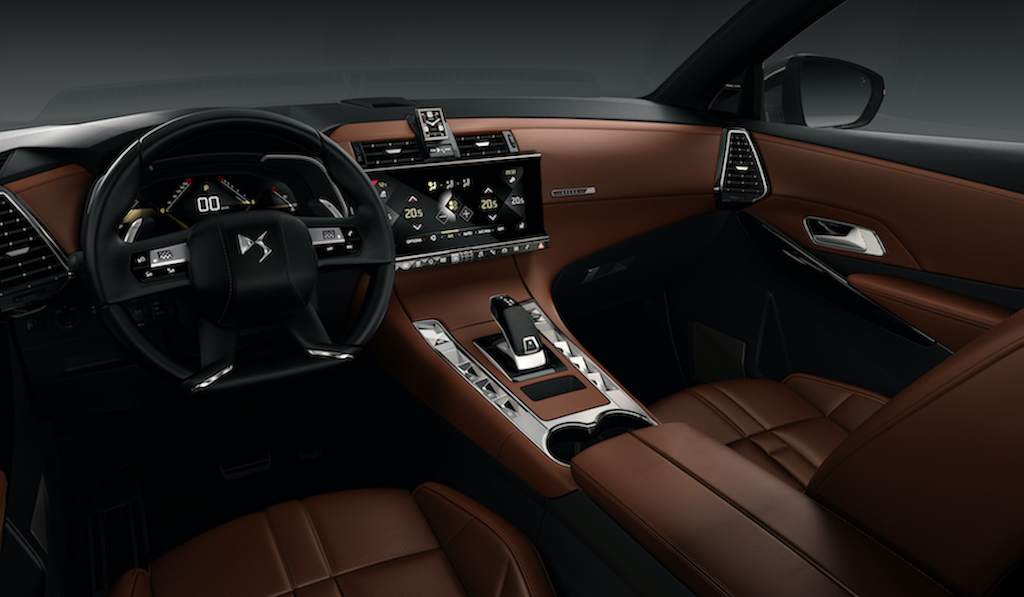 It’s all about the diamonds. It’s a motif that spangles everywhere you look. It actually begins with the glistening tessellated shapes in the front and rear lamp clusters. The cabin has diamond-faceted switches, diamond-shaped virtual dials, diamond screen graphics, diamond knurling, diamond stitching on some versions. Couldn’t be more different from the plainer and generally planar finish the rivals offer.

It’s not style-over-content though. The 12-inch widescreen center touch display is snappy and well-resolved. On a rail below it, a line of handy short-cut buttons will often bring you where you want to get without any round-the-houses menu-diving. Even the base model gets a nice enough eight-inch screen and included CarPlay/Auto phone mirroring.

The driver’s screen has a button so you can choose from a few different layouts, as these things always do. Again, it’s all laid onto a diamond pattern, and not necessarily all that clear for it.

There are four interiors ‘inspirations’ (read: trims) to choose from – Bastille, Performance Line, Rivoli and Opera – each with its own color palette and mix of materials.

Our Rivoli model, named after the Parisian district home to luxury boutiques and the Louvre Palace, made use of diamond-quilted leather upholstery on the seats, dash, fascia and upper door panels as its primary distinguishing feature. In combination with the stylized air vents with their gloss black surrounds, ‘guilloche’-finish aluminium center console trim and rotating BRM R180 clock mounted atop the dash, the leather upholstery works to create a cabin that seems to embody the luxurious image that DS is chasing – at the upper level, at least.

The seats are poly-adjustable in most versions, and the top ones get massaging, venting and heating. In the back, there’s extra cat-swinging space from the mild wheelbase stretch. That said it pushes home the advantage only if the people in front raise their seat bases a little so the people behind can slide their feet in under. 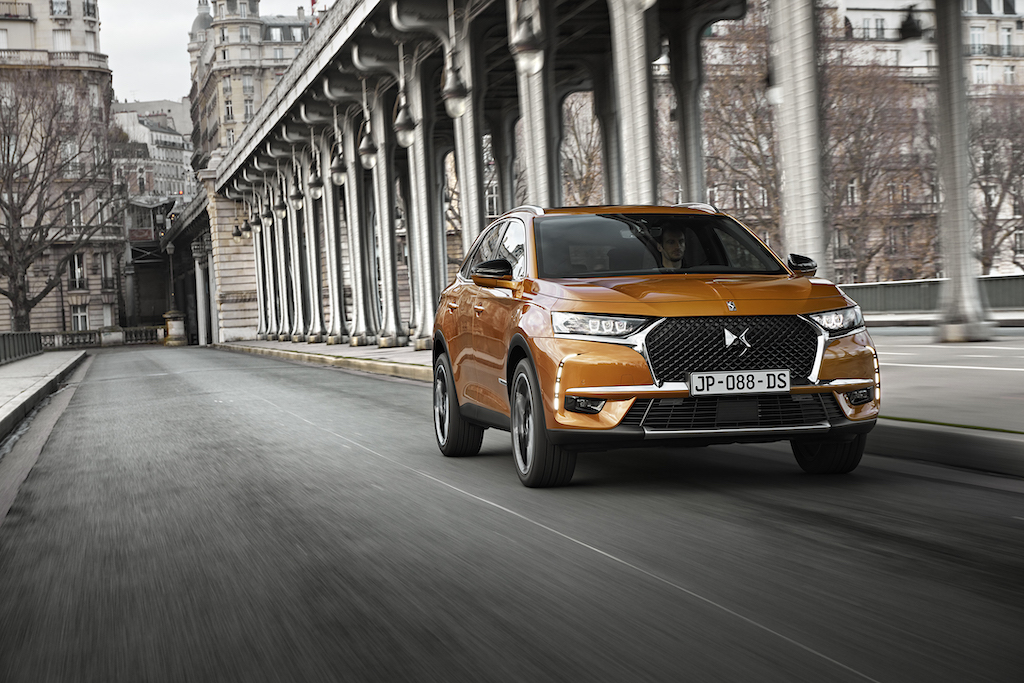 The 7 Crossback has a choice of four engines: a 128bhp 1.5-litre diesel, a 178bhp 2.0-litre diesel and a 222bhp 1.6-litre petrol, with a 178bhp. The 2.0 diesel transfers some vibration through to the controls at idle and gets coarse under hard acceleration. At least in town the start-stop system works very smoothly.

Unlike many of its rivals, the 7 Crossback is front-wheel drive only; this means that, on a wet road, it struggles for grip off the line.  You can choose between a new eight-speed gearbox or six-speed manual.

The DS 7 rides softly and with adequate comfort at low speeds.  It’s a fine-riding car. The body does float a bit around 90-100km/h, but above that bigger speed or in bends the dampers automatically stiffen a little to keep the body under control.

Called DS Active Scan suspension, this system uses a camera mounted behind the windscreen to analyze the road ahead up to a distance of 20 meters. Depending on the topography about to be crossed, this will firm up or slacken off the dampers to suit, theoretically keeping the car level and composed over any lumps or bumps. It isn’t standard fit on every DS 7 Crossback but our Prestige-trim test car was equipped with it.

Sport mode firms up the car’s body control and steering a little, but not enough to cover for the overarching comfort tuning bias and to make it particularly composed or engaging to drive. Comfort mode suits the DS 7 better, without delivering the ride suppleness or isolation you’re hoping it might.

The presence of a Sport mode shouldn’t kid you into thinking this is a car that’s entirely at home with the idea of a more enthusiastic driving style.

DS 7 is perfectly well-enough executed as a vehicle to barge its way into the mosh pit of rivals. The outside is may be not enough distinctive. The cabin style is committed. 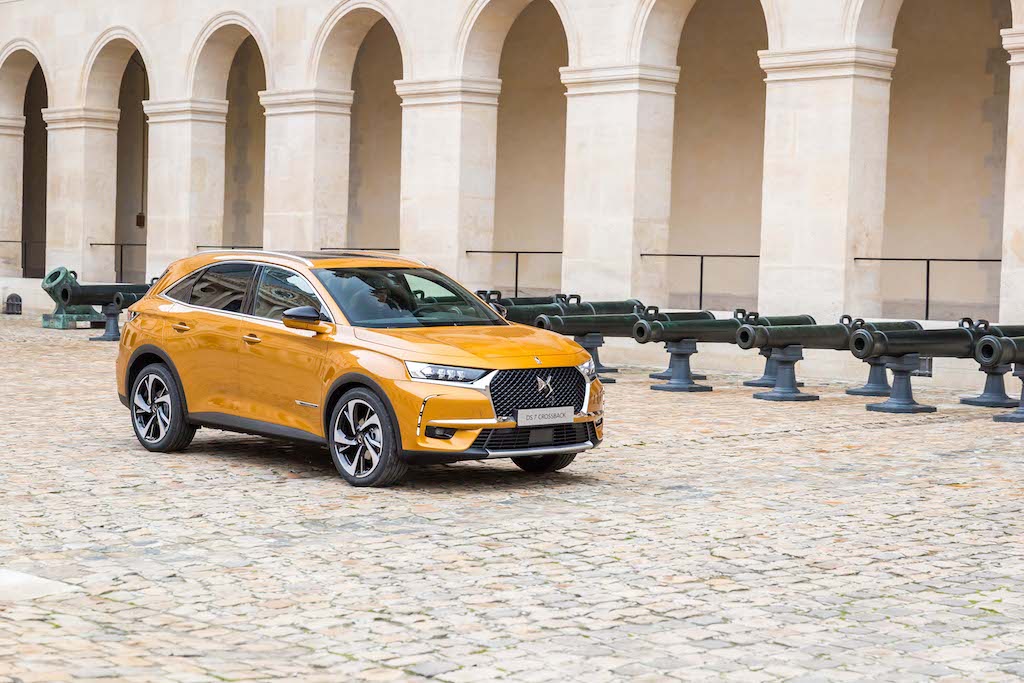 The DS 7 Crossback is the very first standalone DS model and for a first go, it strikes a good balance of space, kit and quality. For the most part it drives well, too and the fancy new Active Scan Suspension works nicely!

The DS 7 is sufficiently well produced for the DS 7 to find its way into this competitive market for premium SUVs. However, the exterior may not be distinctive enough as the cabin style is well-tempered.

We really like to drive the DS7 and we got attached very quickly, probably the result of this compromise between interior and exterior design, the French touch… By the way we didn’t want to give it back after the test week!