If you want – nay, need – an electric car with seven seats, your options have so far been pretty limited. And rather expensive. Mercedes took the GLB, threw out its petrol and diesel engines, and fitted two electric motors plus a battery pack. One motor powers the front wheels, the other motivates the rears, giving the EQB ‘4Matic’ four-wheel drive. 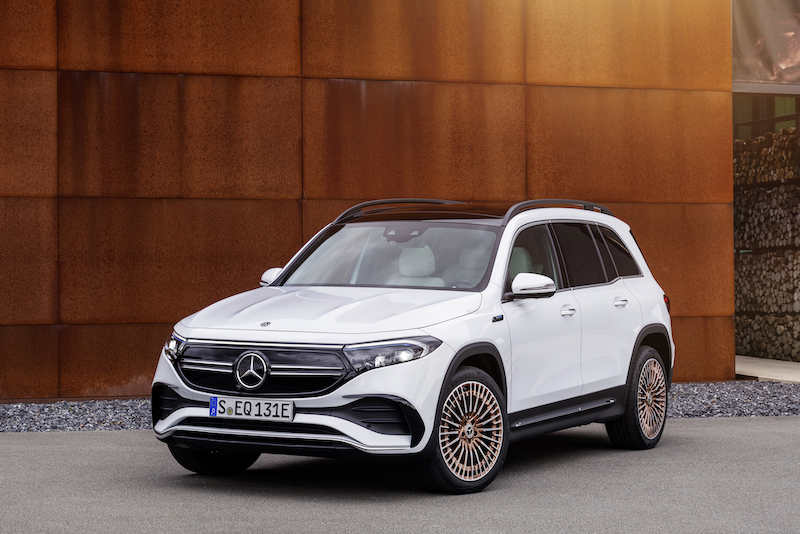 As an electric SUV, the EQB falls into the same category as some excellent rivals, including the Audi Q4 e-tron, BMW iX3, Kia EV6 (our 2022 Car of the Year), Tesla Model Y and Volvo XC40 Recharge. None of those can seat more than five people, though. 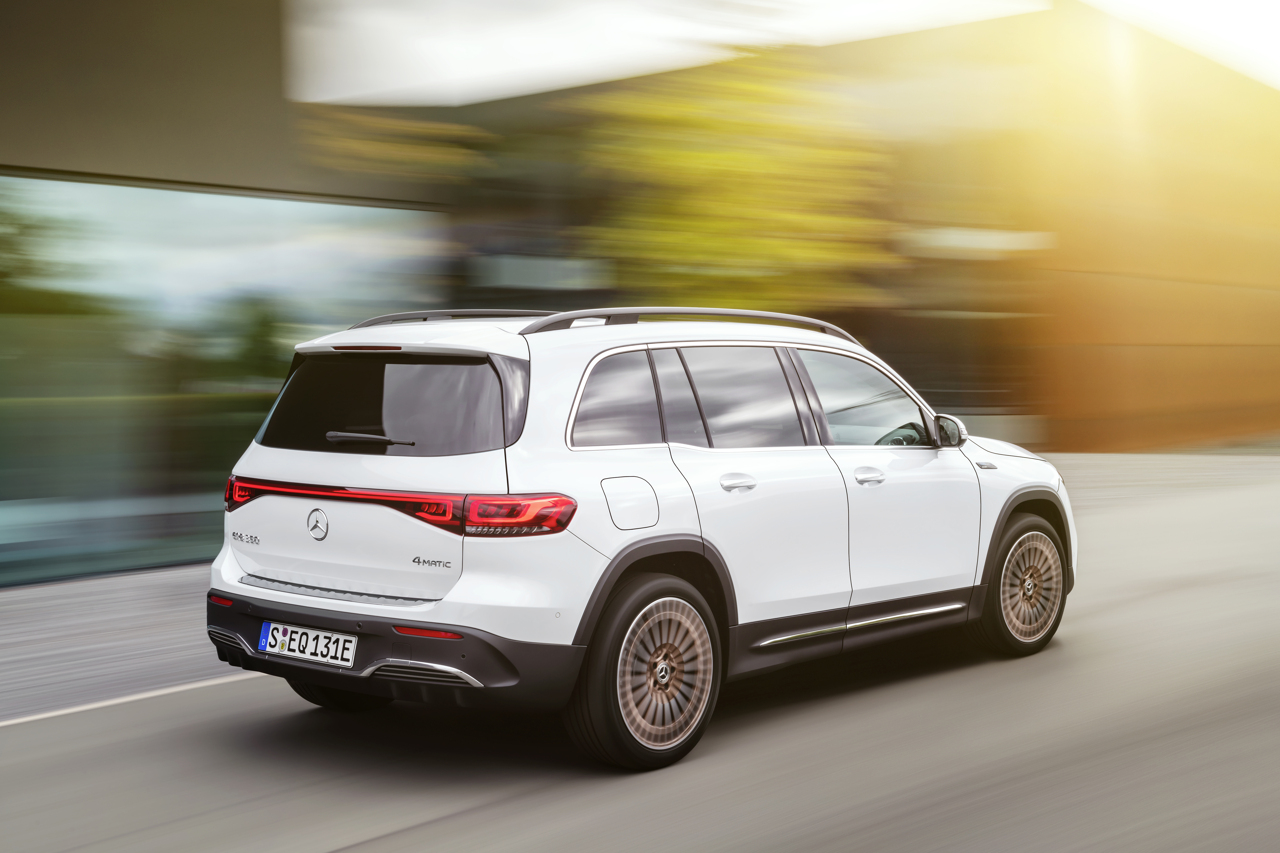 So the Mercedes-Benz EQB is something fairly unique. It’s an electric seven-seater that looks more like a conventional crossover and starts at a vaguely palatable price.

The visual similarities are clear to see; like the GLB, its EQ sibling has more than a whiff of baby G-Wagon to its styling, with a high roofline and a boxy silhouette. In fact, the parallels don’t stop there – quality inside is excellent.

Material cabin quality both looks and feels good, with Mercedes’ habitual application of satin-finish chrome, glossy black plastic and colour-selectable ambient lighting all present and correct for those who like a ritzy, glitzy luxury ambience with plenty of shimmer and flash about it.

Oddment storage is generously supplied in the door bins and centre console, with both of the central storage areas usefully covered with lids, should you want to conceal any contents from passers-by. All things considered, this is a practical and flexible interior for larger families, as well as an inviting one. It may not be the most spacious seven-seater for its price, but the combination of outward size, inward space and versatility that it offers is a strong selling point.

Mercedes has placed its battery in the floor, which does impinge on passenger room a little. The driving position is higher than ideal for those of us who like to scooch right down, but then most SUV buyers probably aren’t phased by such things. The sliding second row seats – the three in the middle of the car – are broadly very comfy but adults might feel their legs are at a slightly unnatural angle due to not being able to rest their feet low enough. But they shouldn’t find themselves short on actual room. 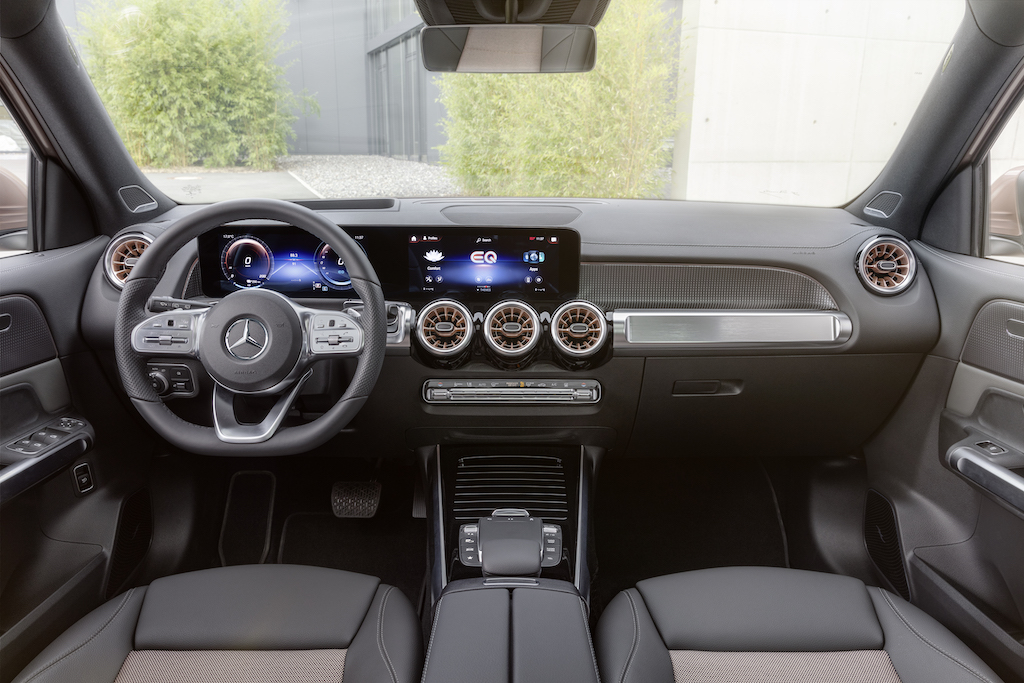 Those seats manually recline, allowing you to create space for more stuff in the boot, or more space for the legs of people who’ve clambered into the rearmost pair of seats. Mercedes says anyone should fit. How comfortable they’ll be is up for discussion, though. The boot’s luggage capacity is 340 litres with the seats up, or 1,320 with them all folded.

The MBUX infotainment system in the EQB is made up of two side-by-side 10.0in displays located behind and alongside the car’s primary controls, which are integrated as if they were one widescreen console. Half of it serves as an instrument console, the other half for navigation, information and entertainment. A head-up display is added on range-topping Launch Edition cars. 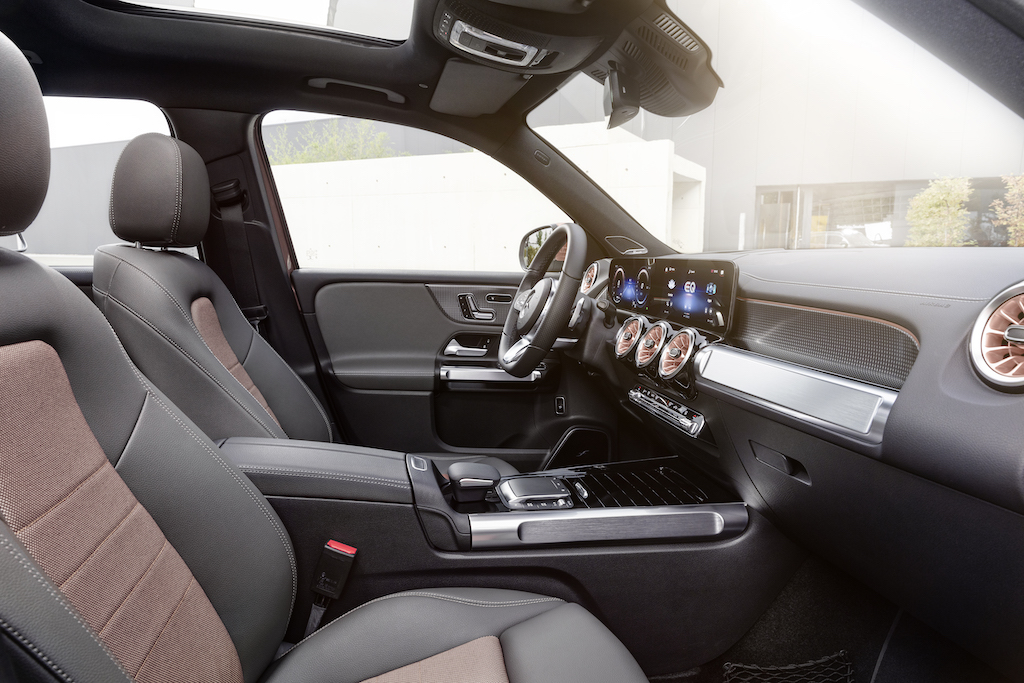 The screens are fairly easy to navigate, with Mercedes still offering a tactile input device for the infotainment system by the centre armrest, which you can use to scroll a cursor around while you drive without needing an outstretched hand on the screen itself. Alternatively, the left-hand thumb-pad console on the steering wheel performs the same function, and saves a lot of swiping and jabbing at an increasingly smudgy screen.

The car’s menus are quickly learned, with Mercedes’ shortcut keys helping to find a specific function within two or three inputs. Smartphone mirroring for Apple and Android handsets is standard fit, but the fitted navigation is well worth using and good at finding charging points along a set route. 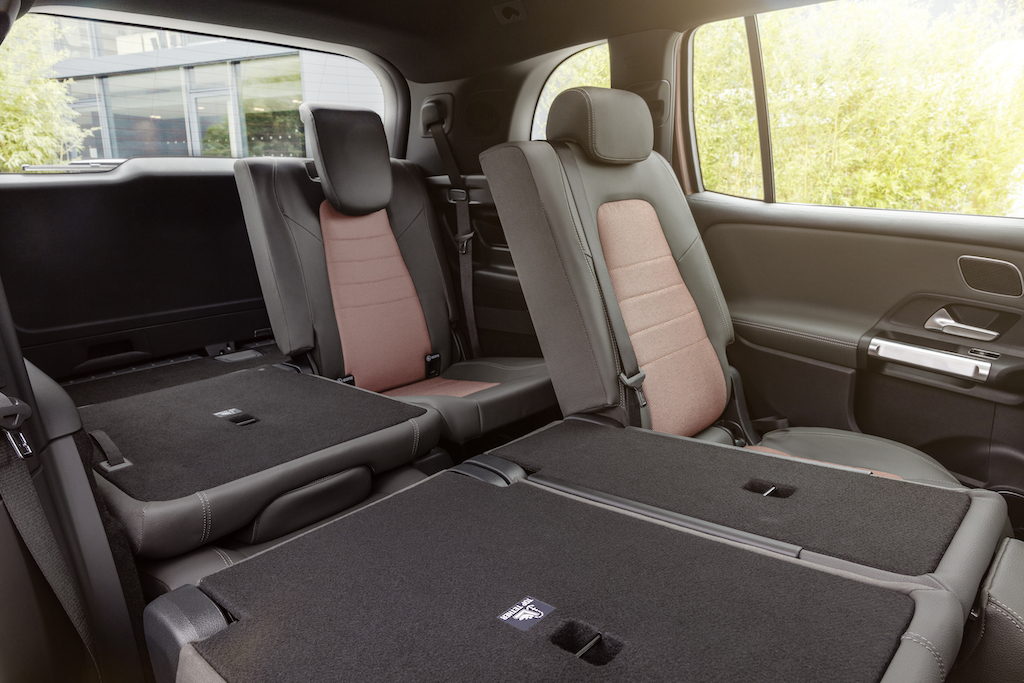 Mercedes has certainly fluffed a couple of details along the way. There’s a sole USB-C charger for rear passengers – just imagine the scrap as two or more kids’ phones run low on charge at the same time – while the touchpad in the centre console up front is so hyper alert, it’ll start skipping backwards and forwards through audio tracks at the slightest wisp of charging cable over the top of it. Not the end of the world during a three-minute pop song, but bloody annoying when you’re 38 minutes into a gripping true crime podcast. 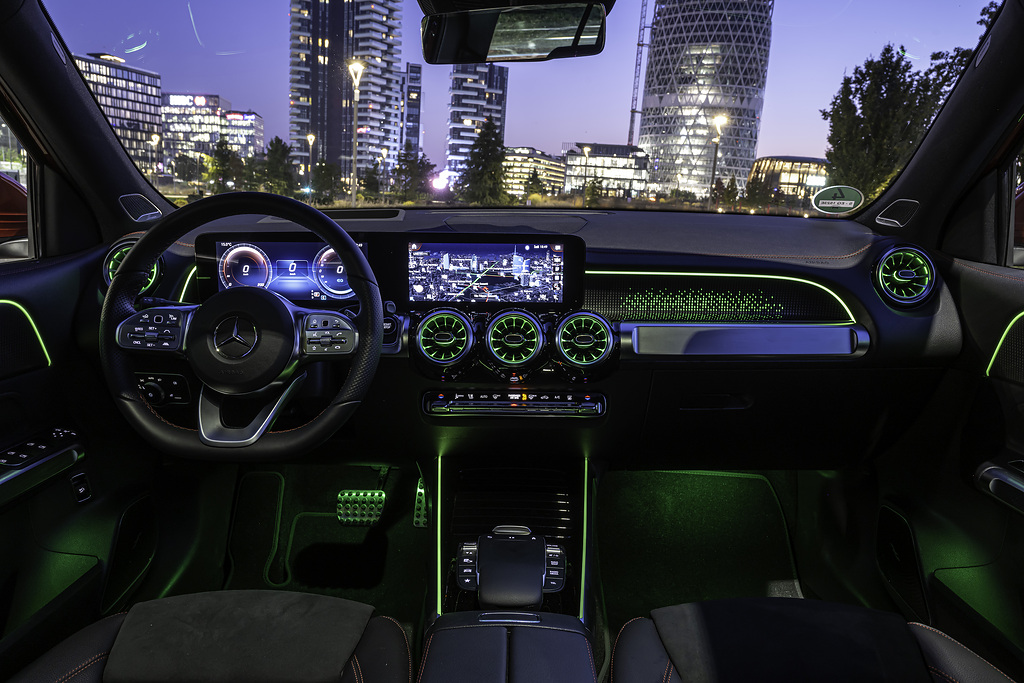 Drive the car to the limit of grip and you’ll find that, while body roll continues to build with lateral load, it doesn’t ever get out of hand, and handling balance survives right until the point that the always-on stability control begins to progressively take power away from the driven wheels. Although the car uses economy tyres, its outright grip level is robust enough.

There is no clear sense that most of the available motor torque is pushing the car onwards from the rear rather than pulling it out of bends from the front axle, and little if any enthusiasm for the conjuring from the car’s handling. But the EQB generally goes where you’re pointing it, with an urgency that’s broadly in tune with the rate at which you’re working the steering wheel. It’s viceless, predictable and pleasant. 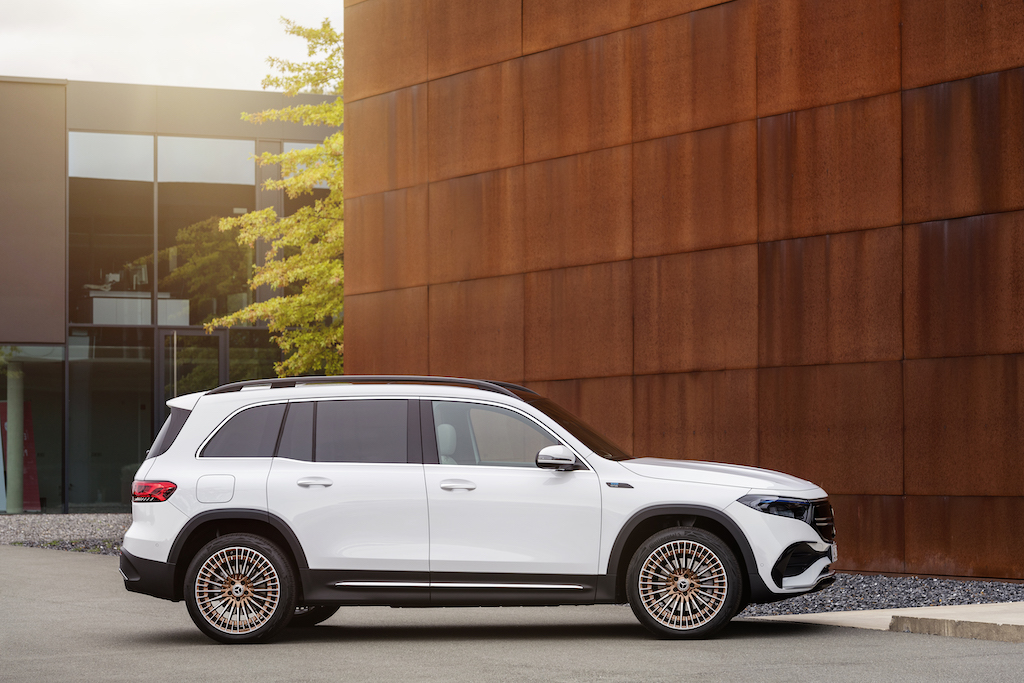 A little extra ride height is clearly no bad thing as far as the EQB’s touring refinement is concerned. Despite offering that large, square passenger compartment for noise to reverberate around in, upright pillars to attract wind resistance and biggish door mirrors for the breeze to whistle around, the car turned out to be commendably quiet.

The car maintains a level body at town speeds, is absorbent over speed bumps and begins to heave and jounce just a bit above the national speed limit and on uneven stretches of dual carriageway, but its low centre of mass prevents it from pitching or tossing its occupants much.

The Mercedes EQB is available with two ‘engine’ choices. Whichever version you go for, the EQB feels nippy enough on the way up to motorway speeds, and makes going for a gap in traffic far easier than the conventionally powered Mercedes GLB. If you choose Comfort or Sport driving mode, power is delivered instantly, while Eco slows the accelerator response to save energy. 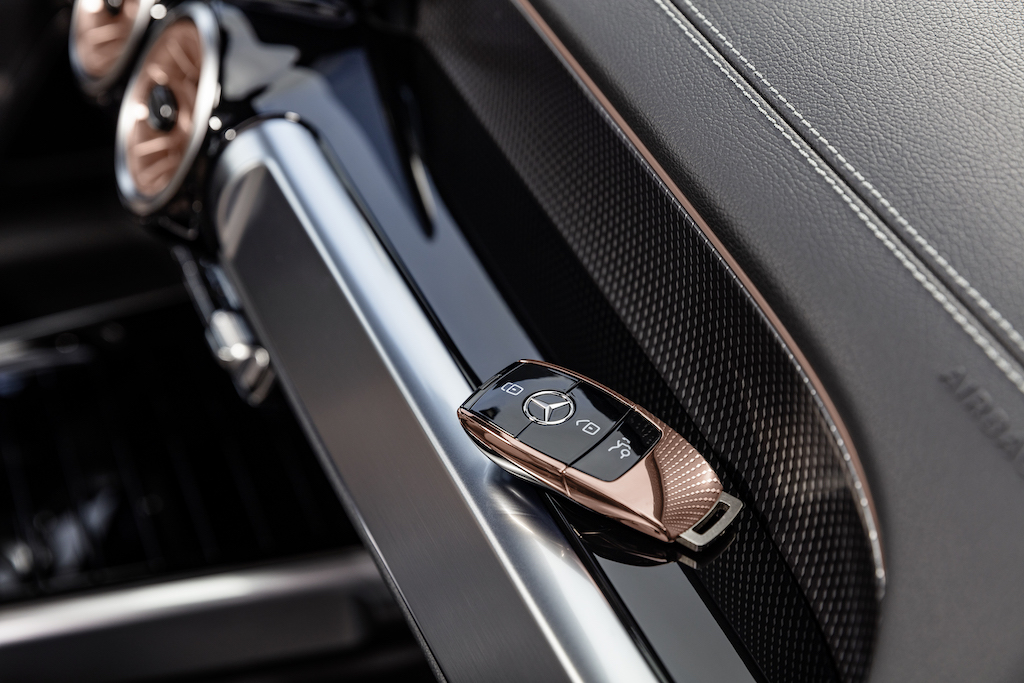 It drives exactly how you’d hope or expect a car like this to drive. ‘A car like this’ being a stocky, two-tonne box with torque to rival an old pre-turbo Ferrari. It never feels anything less than its weight – or height – but its traction and grip are hard to fault. It has all the uncanny silent speed and cornering gumption of its various foes.

There’s also an ‘auto’ setting. Like in the Q4 e-tron, the EQB uses satellite mapping and its onboard radar to spot the vehicle in front, and automatically increases or decreases the slowing regen effect if a corner or junction is coming, or if the vehicle ahead slows down. It’s odd at first, but useful to have when you understand what it’s doing because it allows the car to coast when you lift off the accelerator on a flat road, saving energy.

Charging up the EQB takes around 34 hours from a domestic three-pin plug, so you’re better off installing a dedicated wall box if you can, to cut that down to 11 hours. Rapid charging from a 150kWh charger can top up the battery from 10-80% in a mere 30 minutes, but a far more common 50kWh charger will take just over an hour.

And the EQB does a lot right. It’s the first relatively attainable electric seven-seater in the mainstream that isn’t a Stellantis van. It goes briskly, drives tidily and charges reasonably quickly. Those sold on screen inches and rose-gold details will pore over the interior, although it’s not without its foibles.

As a luxury-oriented SUV with four-wheel drive as standard, room for seven occupants, family-appropriate cabin space and carrying versatility, the Mercedes EQB might be precisely the kind of car that the market needs right now. It’s sensible and functional rather than cultish or frivolous; it’s easy-going and ready to meet your needs, rather than necessarily revolutionise your motoring experience. It’s a useful, desirable and broadly functional EV.