Volvo and estates go together like Ikea and flat pack furniture. The V90 is the most capacious of its current crop. 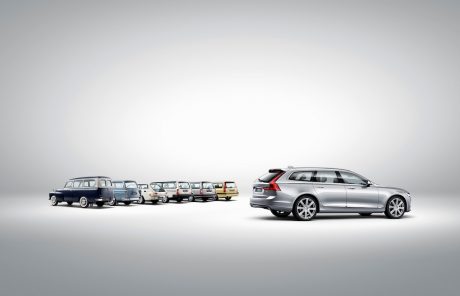 An all-new Volvo estate, which shares very few parts with the V70 it effectively replaces. Its basic engineering and technology, and the flavors of its design in and outside, are copy-pasted from the XC90. Which is just perfect, because the big, seven-seat SUV is very safe, relaxing and a delight to sit in.
The V90 shares chassis parts and engines with the excellent XC90 SUV and the S90 saloon. It reflects Volvo’s different approach to premium big cars. 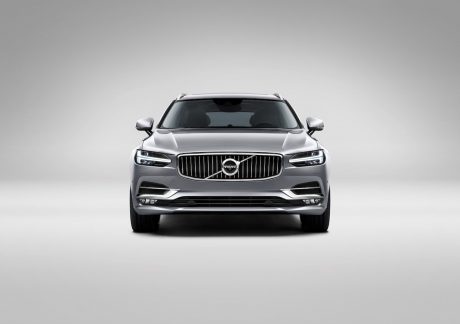 Still, what the V90 has lost in load volume is replaced by its amazing looks: it is modern and stylishly Scandinavian, and steers clear of pseudo-racer clichés. 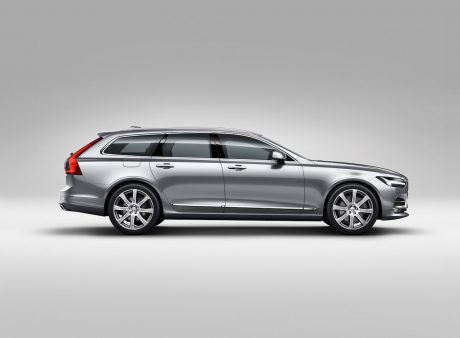 Interior quality is superb Scandi-cool. The driver of a V90 is treated well, no matter their shape and above of that, this car can accommodating easily four adults. Those in the front get loads of head and leg room, and it’s the same in the rear, with class-leading knee room back there. Volvo’s seats are famous for their supportiveness and the V90’s are no different, while wide-ranging electrical adjustment, including for lumbar support, make it easy to get settled. 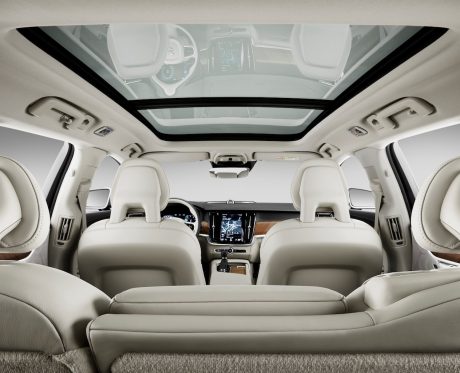 The tablet centre-dash interface is high on resolution and responsiveness, even if it does demand a bit of practice..
There are three trim levels to choose from – Momentum, R-Design and Inscription, while the Cross Country model get its own equipment list. Entry-level Momentum models get adaptive cruise control, keyless start, LED headlights, automatic wipers and lights, powered tailgate and rear parking sensors as standard on the outside. 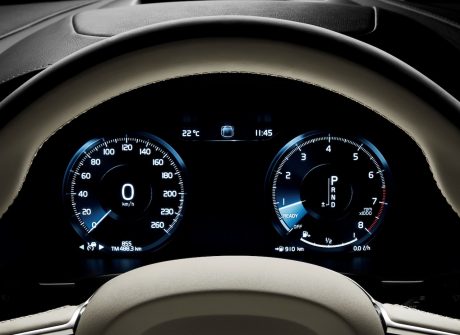 Upgrade to R-Design and the V90 is adorned with sports seats, LED foglights, a sportier suspension and chassis set-up, 18in alloy wheels and a 12.3in configurable instrument cluster.

Topping the range is the Inscription trim, which includes a Nappa leather upholstery, electrically adjustable front seats, thick pile carpets and chrome detailing. The Cross Country models get an additional 65mm ground clearance, skid plates, rugged exterior bodykit and bespoke 18in alloy wheels.
Then there’s the boot, which is worthy mentioning when it’s a Volvo estate That slightly rakish silhouette and sloping rear glass does eat into capacity, but on the 363 days a year when you don’t need max cube, you’ll appreciate the clever storage and tie-down solutions. 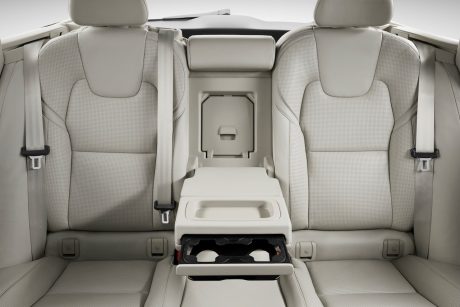 The 60/40 split folding rear seats provide less flexibility than the 40/20/40 arrangements of its rivals, but the seat backs fold completely flat at the touch of a button conveniently located just inside the tailgate opening. With them down load capacity grows to 1526 litres, which is frankly massive. 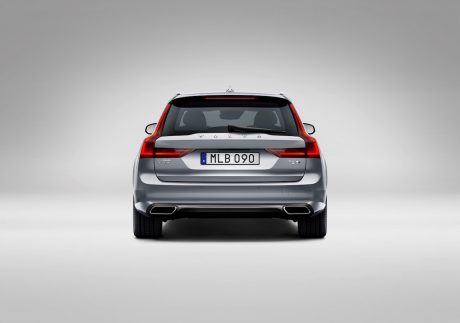 Forward visibility is very good, but unlike the boxy Volvo estates of old, the V90 has a heavily styled rear end that means the view rearward is slightly obscured. At least reversing sensors come as standard. 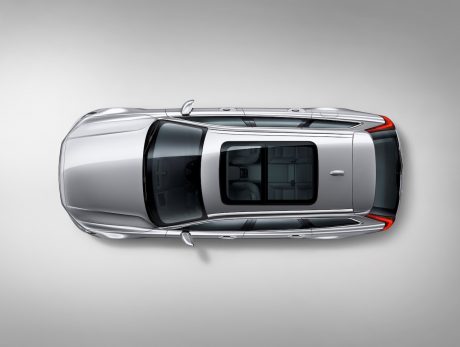 The V90 engine range consists purely of 2.0-litre four-cylinder units, in petrol, diesel and plug-in hybrid forms. The petrol range comprises the T4 190 and T5 250, while a T6 320 is only available in the high-riding V90 Cross Country. For diesel power, there’s the D4 190 and D5 Power Pulse 235, while the most powerful model in the range is the T8 Power Pulse petrol-electric plug-in hybrid, which has 320bhp and a 0-100km/h of 4.8 seconds. 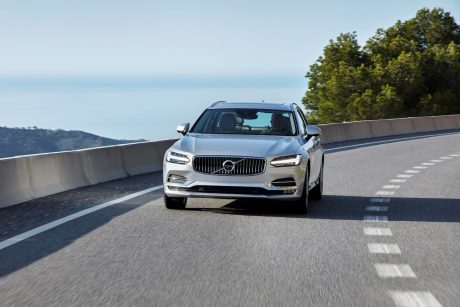 Volvo has used its appealingly named Power Pulse technology on the V90’s D5 engine. This uses compressed air to help the turbocharger kick in faster, and the result is superbly urgent acceleration from low revs.

The more potent engine is called D5; it packs 232bhp and 480Nm, and features a trick electric compressor, called PowerPulse, that’s designed to spin up the turbocharger with air and reduce the amount of turbo lag – the delay between pressing the throttle and the engine providing its maximum boost. 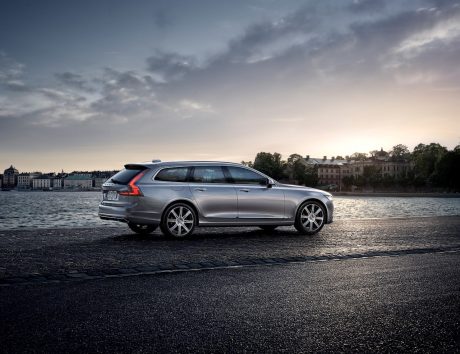 The D5 is offered with four-wheel drive only, but while it’s quicker than the D4, it’s also a couple of BIK bands higher thanks to CO2 emissions of 129g/km.
Regardless of which engine you choose, you’ll end up with an eight-speed automatic transmission

The V90 is best enjoyed when driven at a relaxed pace; leave it in Comfort mode and you can enjoy the well-judged steering and neutral chassis instead. The soft set-up doesn’t lend itself to particularly incisive handling, but the V90 feels stable and composed, particularly at high speeds on the highway.

The V90 gets an arsenal of safety equipment – both active (which tries to stop the accident) and passive (which protects you when it’s happened). Its features include large animal detection, which is designed to watch for creatures like elk and moose, but is also said to be capable of warning you when deer are at the side of a dark road in front of you. 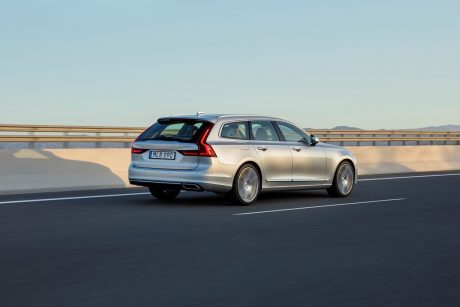 The car also gets Volvo’s latest semi-autonomous technology, called Pilot Assist. You still need to keep your hands on the wheel to let the car know you’re ready to intervene, but do that and it’ll look after acceleration, braking and keeping the vehicle in the right lane. It works at speeds of up to 130km/h, so it’s possible to use it on long journeys – though the real strength is in slow-moving or stop-start traffic on urban dual carriageways.

Volvo V90 isn’t the biggest executive estate on sale, but hey… size does not matter! The GUSMEN crew loved to hit the road with it! It’s practical enough and crammed with useful features, while its versatility combines with an eye-catching design, a classy and minimalist cabin and a relaxed driving experience. Buyers of these sort of estates aren’t just looking for space; they also want a comfortable ride, a sharp drive, strong engines and generous levels of luxury and equipment. One of the best Volvo ever. Enough to tempt you away from the Germans?