The OPEL Insignia Grand Sport is the replacement for Opel’s player in the small family saloon game, the Insignia. Though, along with its bigger new name, this isn’t really a small saloon. It’s sized with the Mercedes E-Class and BMW 5 Series in mind, because Opel sees the premium brands eating into its territory and has decided to quite literally pick on someone its own size. Which is why the Grand Sport has swelled by 55mm in overall length and a whopping 92mm in wheelbase. This is a massive car now. 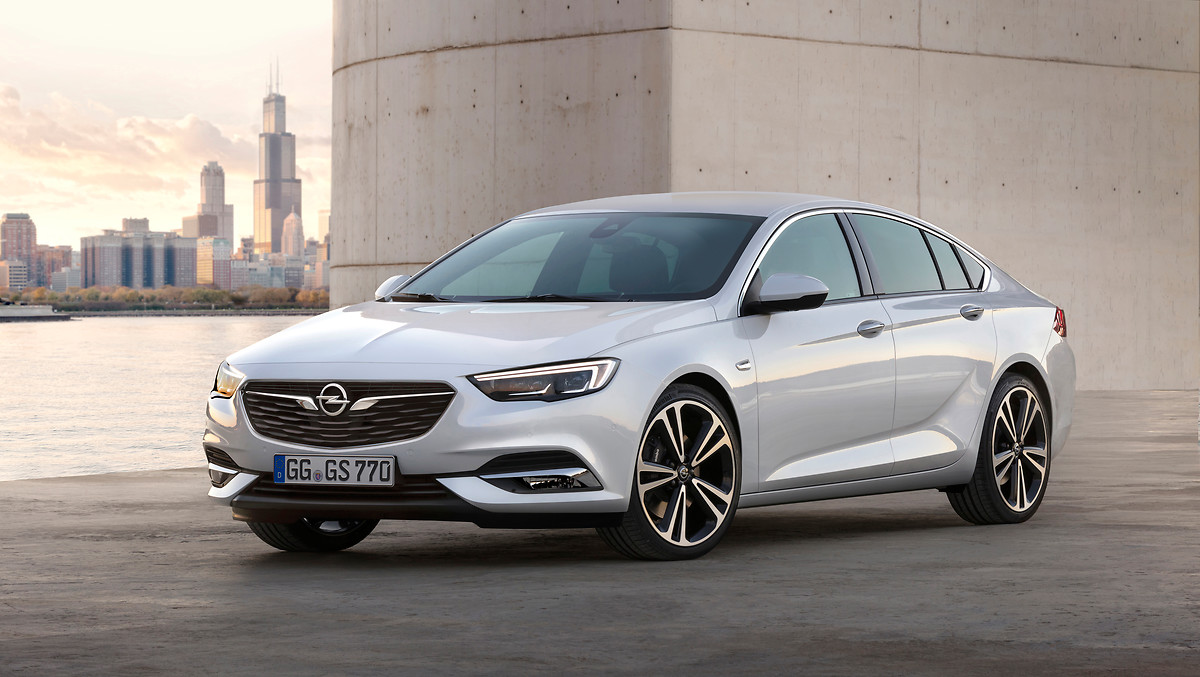 The Opel Insignia is offered in its three variants the Grand Sport, Country Tourer and Sports Tourer.

Everything from now on as we all know will be developed jointly with new owners Groupe PSA. That said, the Insignia and latest generation Astra which were both developed and engineered under GM’s watch are set to continue for a few years yet. Both models have met with general praise and in the case of the Astra walked away with a coveted European Car of the Year award. 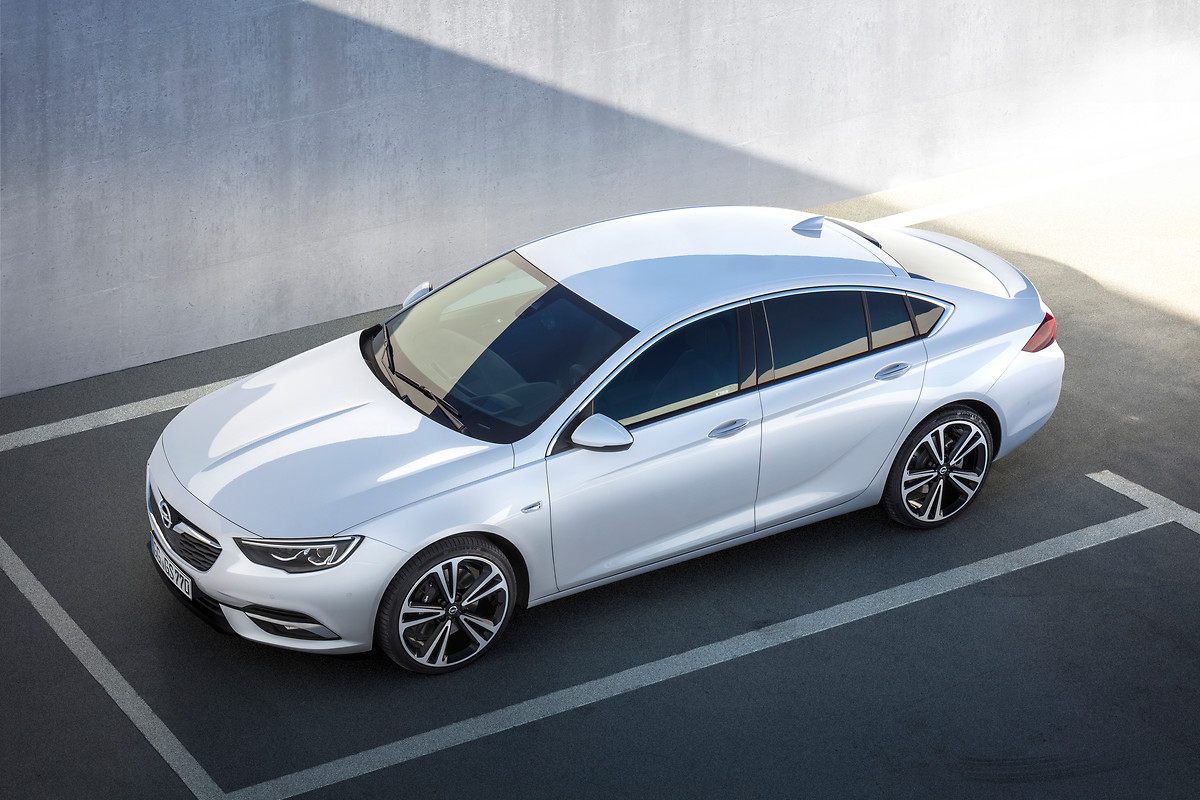 I spent a week with the sporting flagship of the current Insignia range – the GSi Grand Sport. Not only is it a new model but a return of the GSi badge – with others to follow in the not too distant future…

Exterior design features include chrome air intakes, front and rear GSi bumpers, side sills and a large GSi rear spoiler (Grand Sport only), as well as incorporating Opel’s innovative IntelliLux LED matrix headlamps. So I was driving a sporting themed model – the GSi. It comes in two body shapes both with four wheel drive and certainly looks a bit more zesty to the eye – if a little restrained. The car under my command was a 210PS 2.0 diesel with an 8 speed gearbox and twin clutch torque vectoring all wheel drive system – sounds pretty good huh?…on paper at least anyway it does. 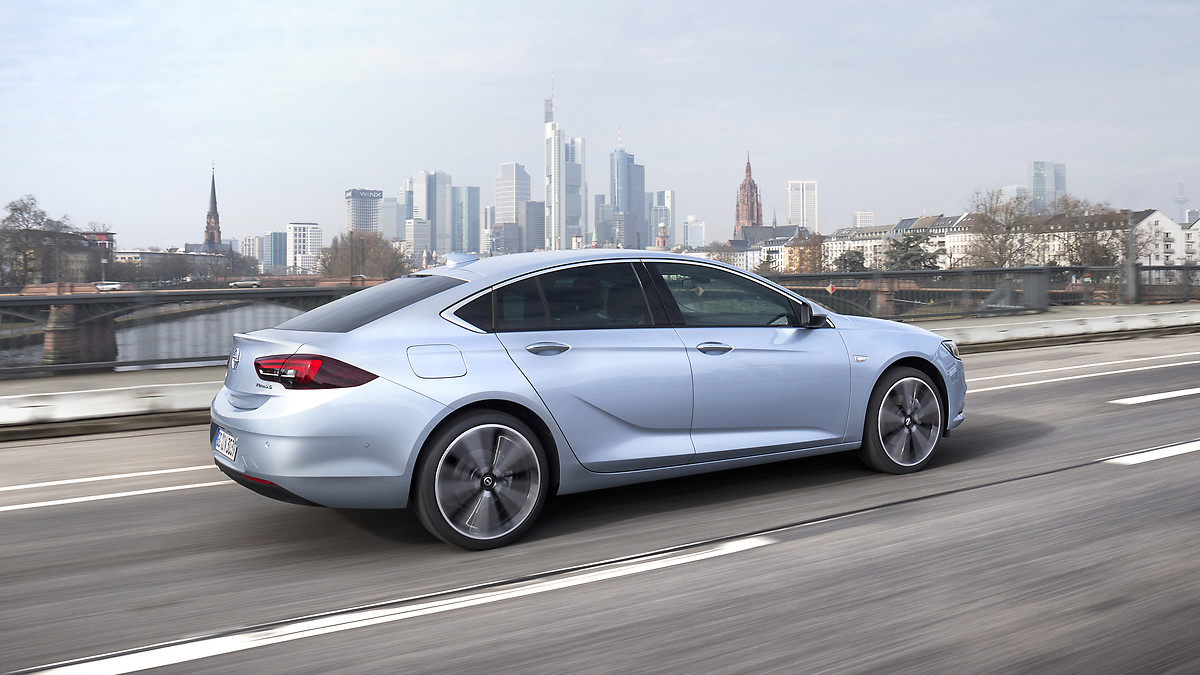 About the interior, the approach is the right one: fit higher quality soft-touch materials and more convincing metallic trim around a layout that swaps a shotgun blast of plastic toggles for a touchscreen, and rationalised controls. It’s a successful swap. How’s this for common sense – part of the touchscreen bezel works as a shelf to rest your hand on, making selection of menu items easier on the move.

In the front, the seats are superbly comfortable with excellent adjustable lumbar support. The settings for the heated seats are well judged too. 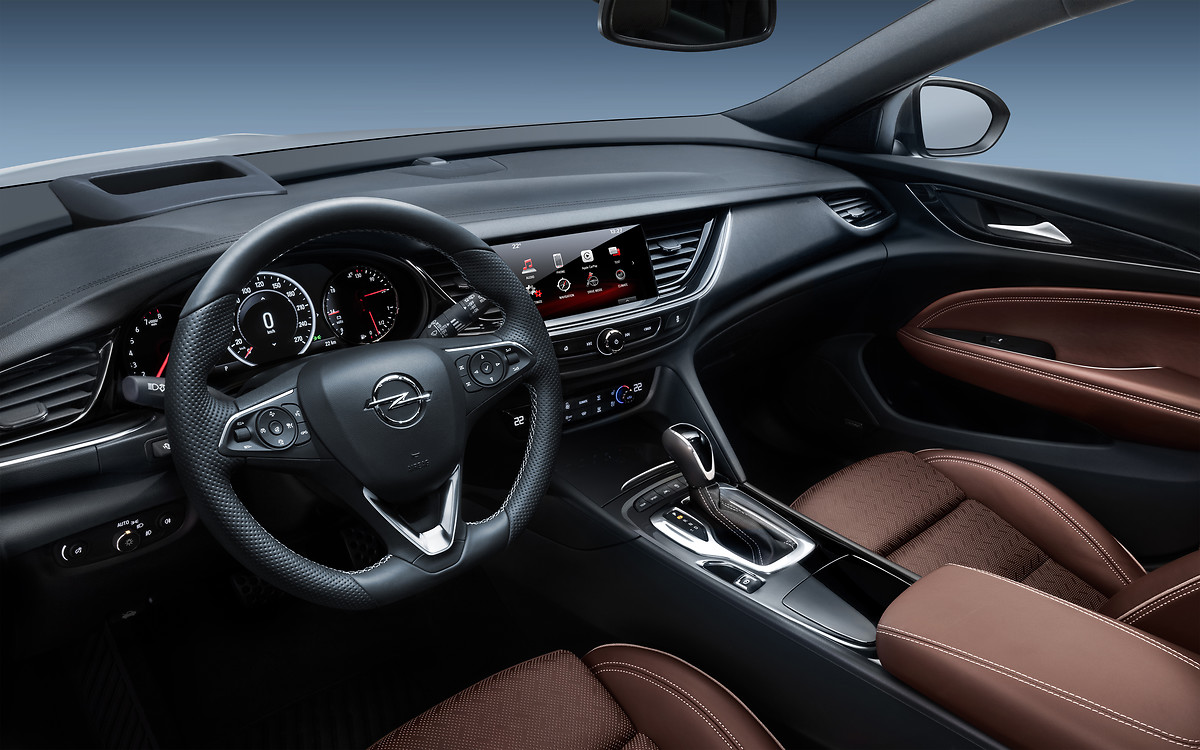 In the back, headroom is adequate, but not spectacular, but there’s legroom for adults behind adults and a generous rear door aperture. Leather is included on top-spec cars, and 79 per cent of all trim levels have sat-nav. All get Apple CarPlay and Android Auto, however, no sat-nav is never more than a smartphone away. Active safety systems abound too, with all models benefitting from autonomous emergency braking, a far-too-sensitive frontal collision alert, a distance readout to the car in front and lane departure warning and steering intervention. 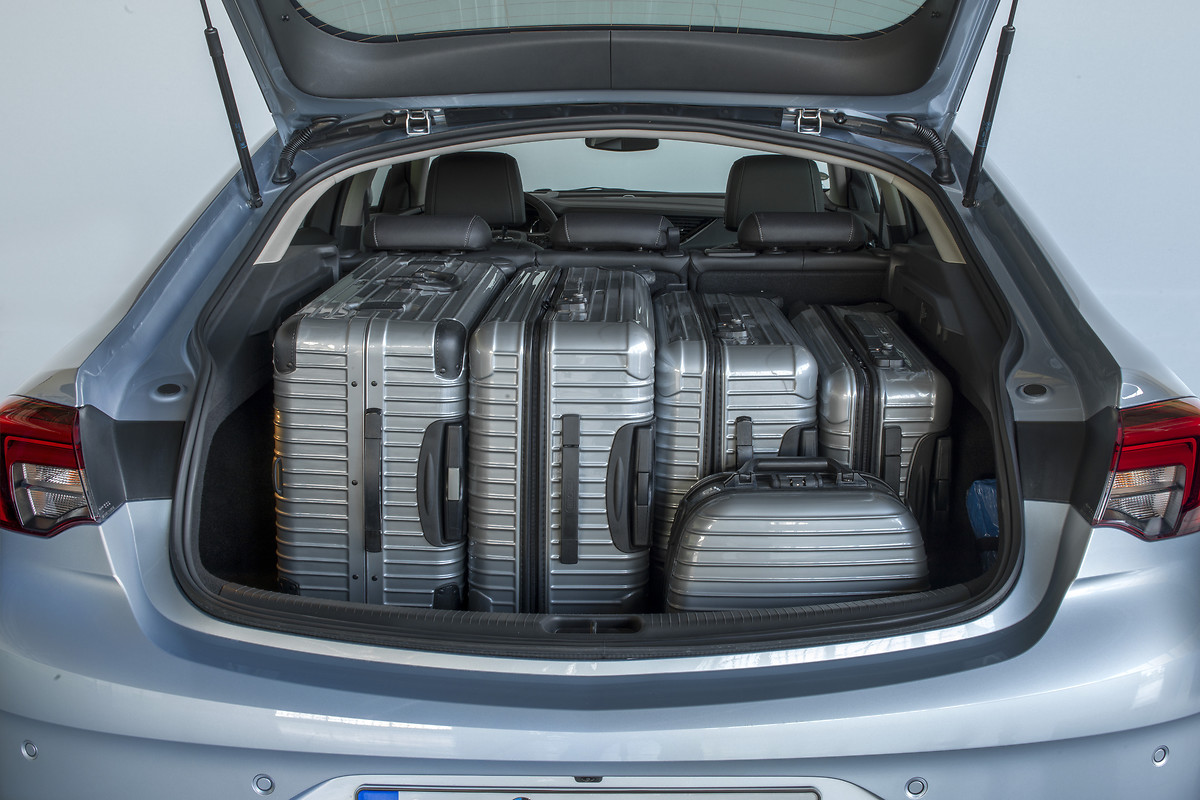 In addition to the availability in both body styles there are two, four cylinder engine choices for the new GSi models. These are 2.0 litre 260 hp, 400 Nm (295 lb.ft) turbo petrol and 2.0 litre BiTurbo 210 hp, 480 Nm (354 lb.ft) turbodiesel units and these units are also available in other models with lesser specification levels. Both engine choices with the GSi come as standard with an eight-speed automatic gearbox, all wheel drive with torque vectoring, FlexRide chassis adjustment, Brembo four cylinder brakes with Michelin Pilot Sport tyres on 20-inch alloy rims. 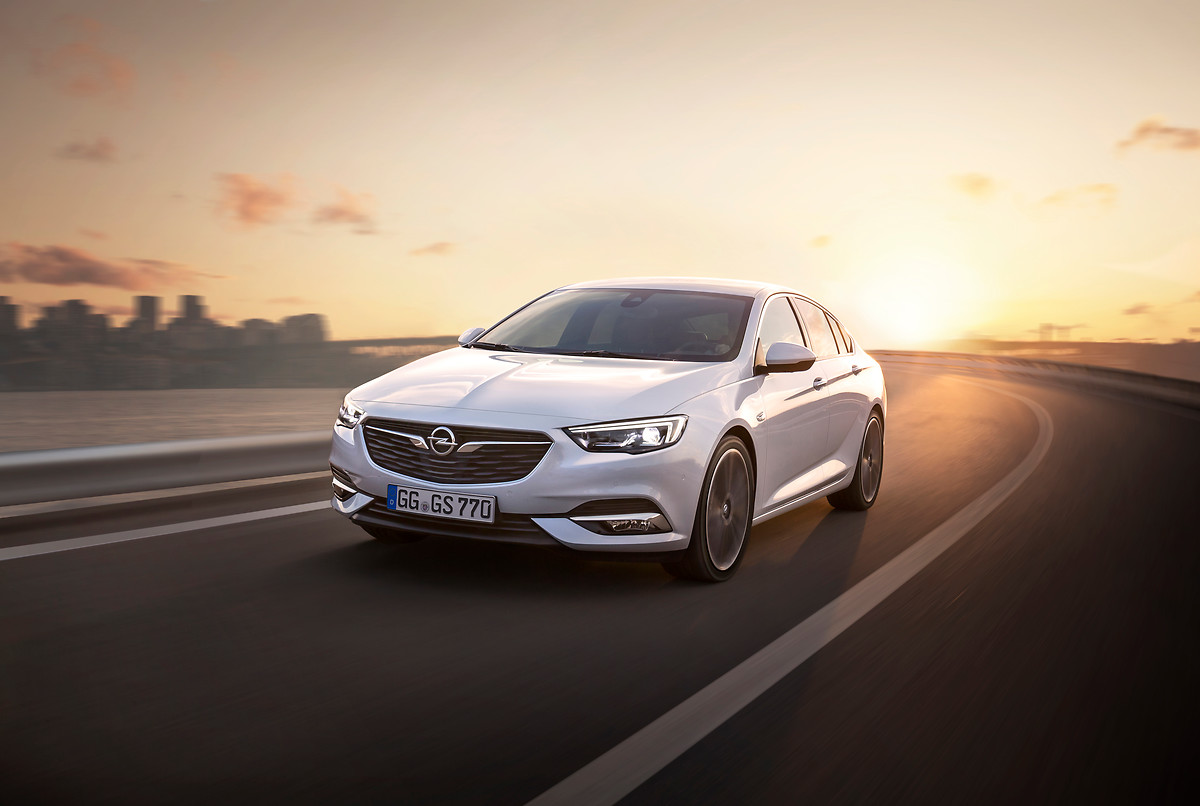 In Grand Sport hatchback body style the Insignia GSi petrol achieves 0-100km/h in 6.9 seconds and has a top speed of 250km/h  the diesel‘s corresponding figures are 7.3 seconds and 233km/h. Combined Cycle fuel economy is 32.8 mpg with CO2 emissions of 197 g/km for the petrol and 40.4 mpg and 186 g/km for the BiTurbo diesel. 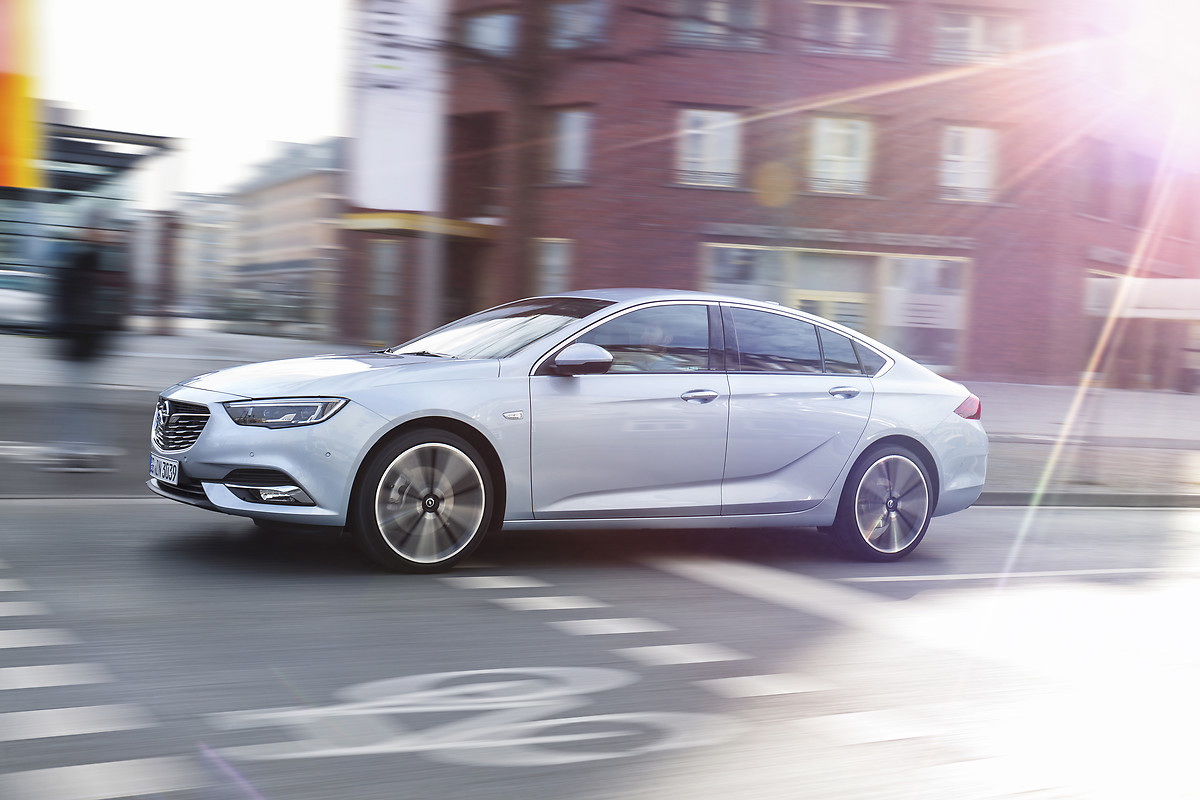 The Insignia is pleasant cruiser to drive. You’ll feel how soft the car’s ride is from the first moment it dismounts a speed bump and porpoises slightly, but the upshot is the car has a relaxed, flowing gait at higher speeds and doesn’t transmit undue shudder or vibration into the cabin. It just deals with the stuff a Belgian road can throw at it. Potholes, ridges and expansion joints, mostly. But the fact it’s up to 175kg lighter than the old car is a boon you’re more likely to notice at fuel pumps than when confronted with a serpentine section of road.

Compared to the noisy old Insignia, the improvements in rolling refinement are really welcome. Wind and tyre noise are notable by their impressive absence, and the diesel emits a less whiney, smoother tone than before. 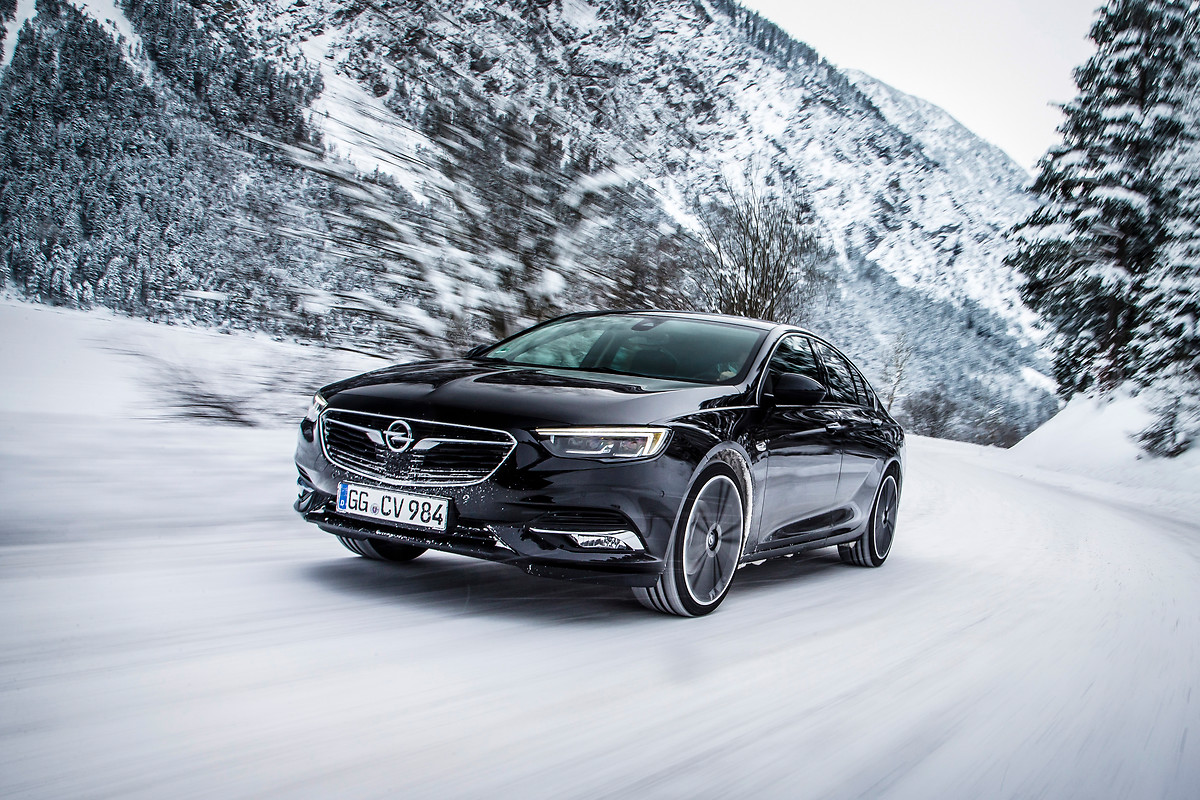 Four driving modes are available through the GSi’s FlexRide system, allowing damping, steering, gear change-up points and the car’s stability and traction systems to be configured according to a driver’s preference. The Tour mode felt the best suited to our road conditions most of the time.

The Insignia, then, is a machine built for work, rather in the way that the architect Le Corbusier used to think of his houses and flats as “machines for living” rather than dwellings. (If that’s not too pretentious). It works. 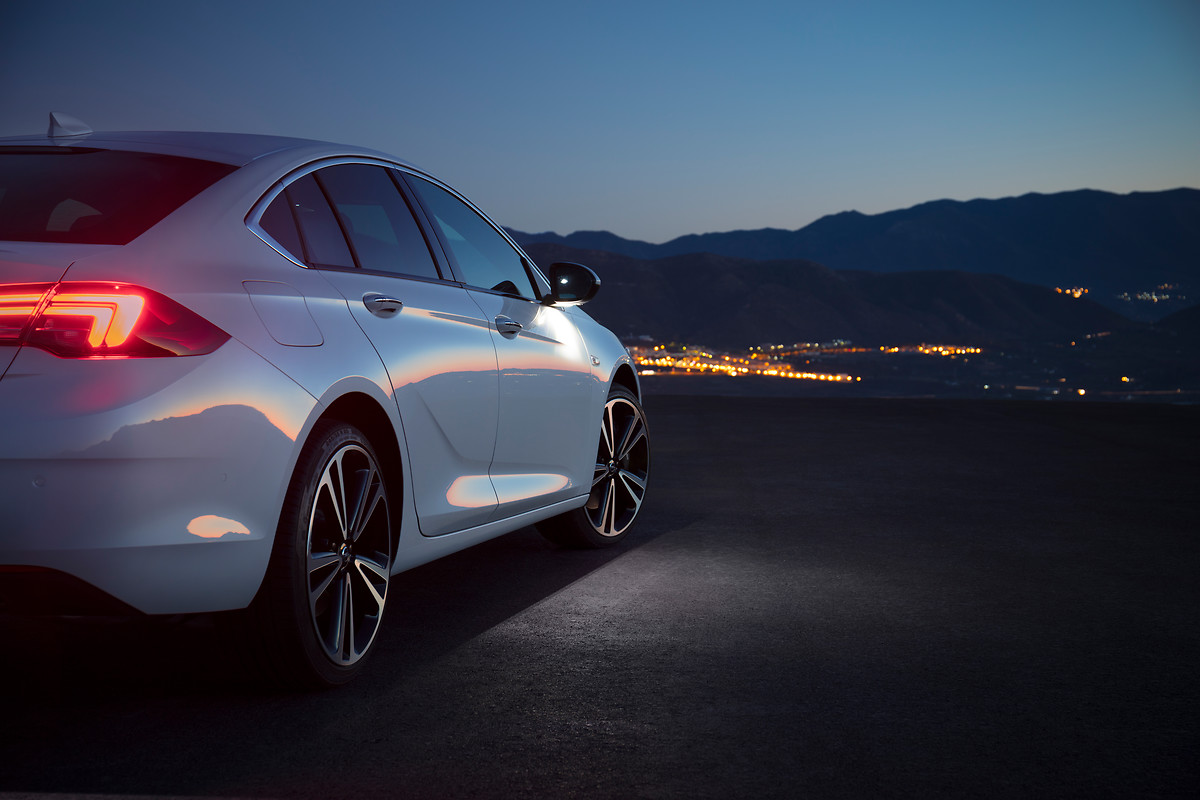 The Insignia Grand Sport could be one of the last wholly Opel model range developed solely by them and all future models will come through their new partnership with the French PSA Group and indeed that is already underway with the Crossland X and Grandland X SUVs.