It is the fourth-generation Mercedes-Benz C-Class, freshly updated for 2018. One in five Mercs sold is a C-Class, and if you lump in the old 190 saloon that went before it, this is a car that’s sold nearly ten million units since 1982. It may be one of the most established names in the executive car class, but it has to compete with a wider range of rivals than it ever faced before. And, with every manufacturer eager for its share of the market, Mercedes can’t afford to rest on its laurels.

Not a car you want to mess up then, yet Mercedes describes this as the biggest update the car has ever had; over 6,500 components have changed, which is nearly 50 per cent of the whole car.

If you’re thinking it looks surprisingly like the old car (for one that’s apparently so different), then nearly all of those components are in a brand new electrical architecture – transplanted in from the S-Class, to unlock loads of new safety tech and self-driving potential – and a bunch of new engines. 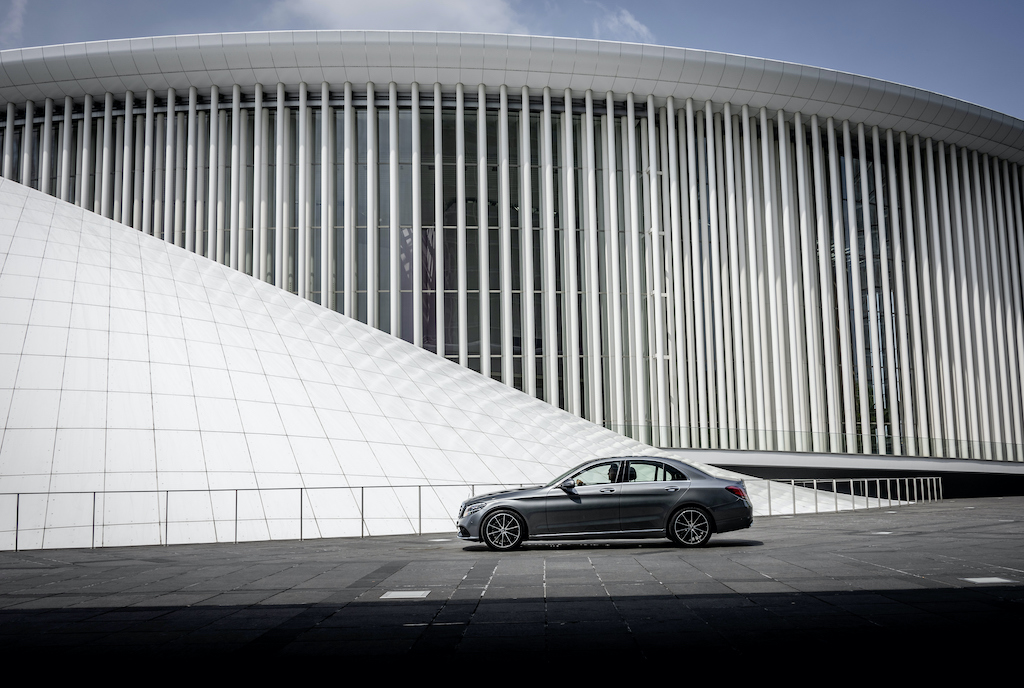 Mercedes-Benz has made the usual changes on the outside with new headlights (that are all LEDs) to revised bumpers, wheels and new tail-lights. The lights look spectacular at night, both the front and rear ones but unless you have a keen eye, it’s difficult to differentiate the old car from the new. It still looks elegant despite being in the market for almost 5 years now with lots of visual cues from the bigger Mercs.

The interior has been updated to be in line with new Mercedes models. Even entry-level models get a reasonable list of toys, but you can easily spend thousands more on plush leather upholstery, high-end stereos and more tech than you can shake a selfie stick at. 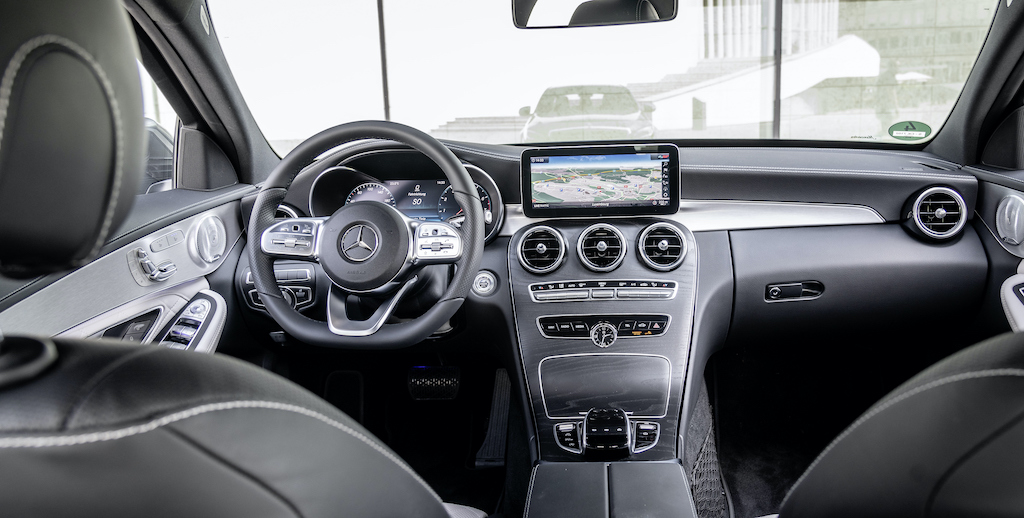 The large transmission tunnel robs space from rear passenger. The cabin feels premium but some more space would have been welcome. Gone is the fingerprint loving gloss black finish on the centre console, replaced by classy wood which is less prone to scratches. Fit-finish levels are excellent although some parts of the dashboard (mostly the lower half) have hard plastics while the massive panoramic roof gives the cabin an airy feeling. That said, the cabin is still quite compact and there isn’t much space at the rear with the transmission hump making this car a strict 4-seater. Further eating into practicality is the spare wheel which has been placed on top of the boot floor, not under it.

Tall adults will fit neatly in the back, their only possible bugbear being not quite enough room to slot their feet under the front seats.

There are three seats in the back of the C Class, but three adults sitting there won’t thank you on a long journey.

At least storage space is decent enough, with a relatively generous pocket in each door and map pockets on the backs of the front seats.

The front passenger seat gets electric height adjustment as standard, while fully electric seat adjustment is an option on Sport versions and above.

On the plus side, all C Classes have folding rear seats to extend the luggage space, and the seatbacks lie flush with the boot floor when dropped. 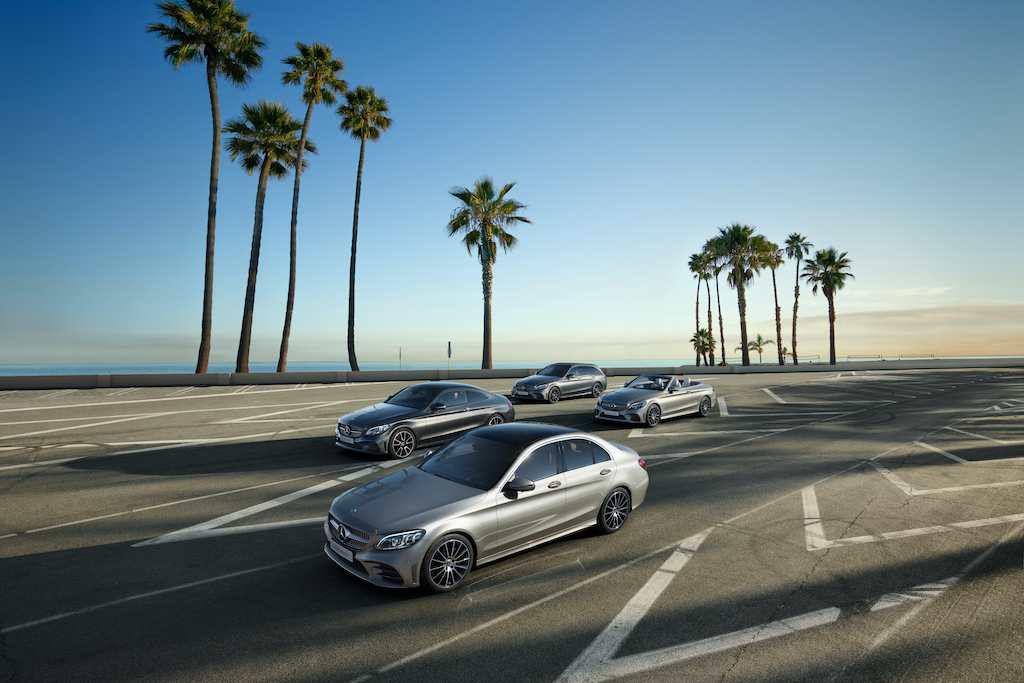 Even Diesel’s a bit of a dirty word these days, the C220d is my model of choice. With the same 191bhp 2.0-litre diesel engine as is used in the larger E Class saloon, it offers plenty of low-down grunt and feels fast enough to hold its own against any of its chief rivals. It also comes as standard with a nine-speed automatic gearbox that, while occasionally slow to react, changes gear smoothly and crisply. There’s also a more powerful 242bhp version of the same engine, badged C300d.

As for the petrol options, you can choose between the entry-level is C180, the mild hybrid C200  or the more powerful C300. Performance petrols are to be found in the AMG range. The C43 is rapid, with four-wheel drive traction helping out in the wet.

Mercedes’ new diesel-electric hybrid, the C300de. With that motor, you’ll benefit from the superior long-distance economy and low CO2 emissions that a diesel offers, while its 121bhp electric motor and 13.5kWh battery allow it to travel up to a claimed 30 miles on electricity alone, meaning it’ll be cheap and clean to run around town. With both power sources working together, the C300de pulls strongly and flexibly (0-100km/h takes less than six seconds. Here electrical assistance is provided by the alternator rather than a bunch of batteries and motors. 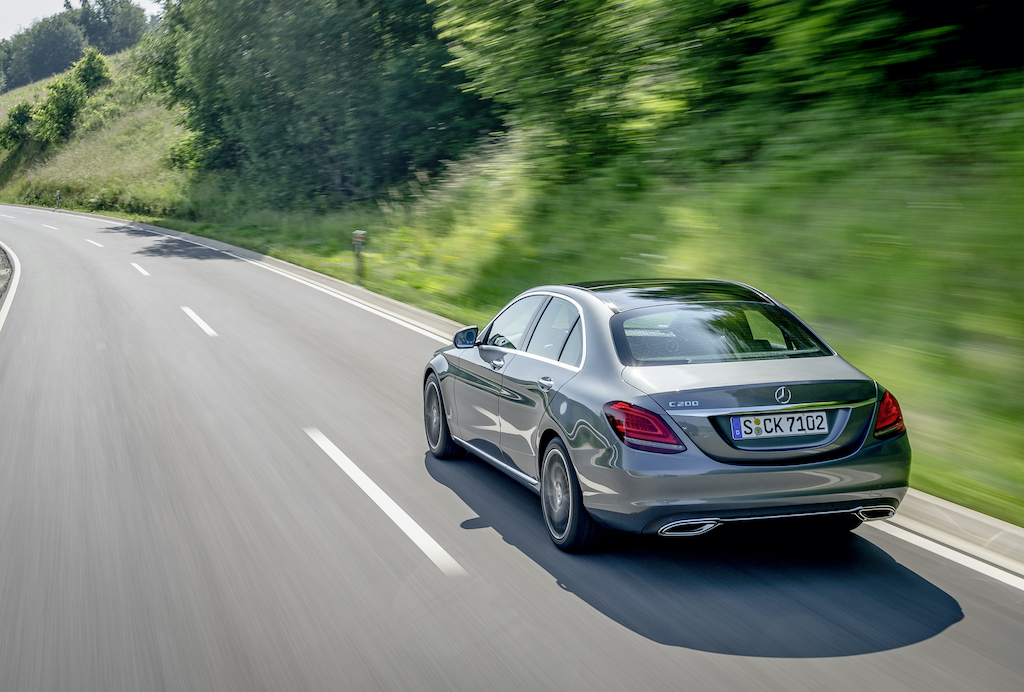 Switch the C200’s drive select into its more eco-minded modes, though, and you’ll sense the electrics whirring away as you pull out of junctions, while the engine will cut out as you coast towards junctions or on the motorway, to further save fuel and cut emissions. Switch to Sport and accelerate hard and the electrically-provided 14bhp is all used for performance, but doing so is probably missing the point a bit.

With the Airmatic suspension fitted, the C Class is pretty good to drive. Flick it into Sport mode and the suspension sharpens up noticeably, giving strong enough body control for you to hustle the car along a twisty road at a fair old lick but without making the ride so brittle that the car is knocked off your chosen line by mid-corner bumps.

The C220d is better; in fact, when you’re coasting or cruising along, it’s whisper-quiet. A hybrid version badged C300de is also available and adds silent electric running. It’s smooth to switch between power sources, too. 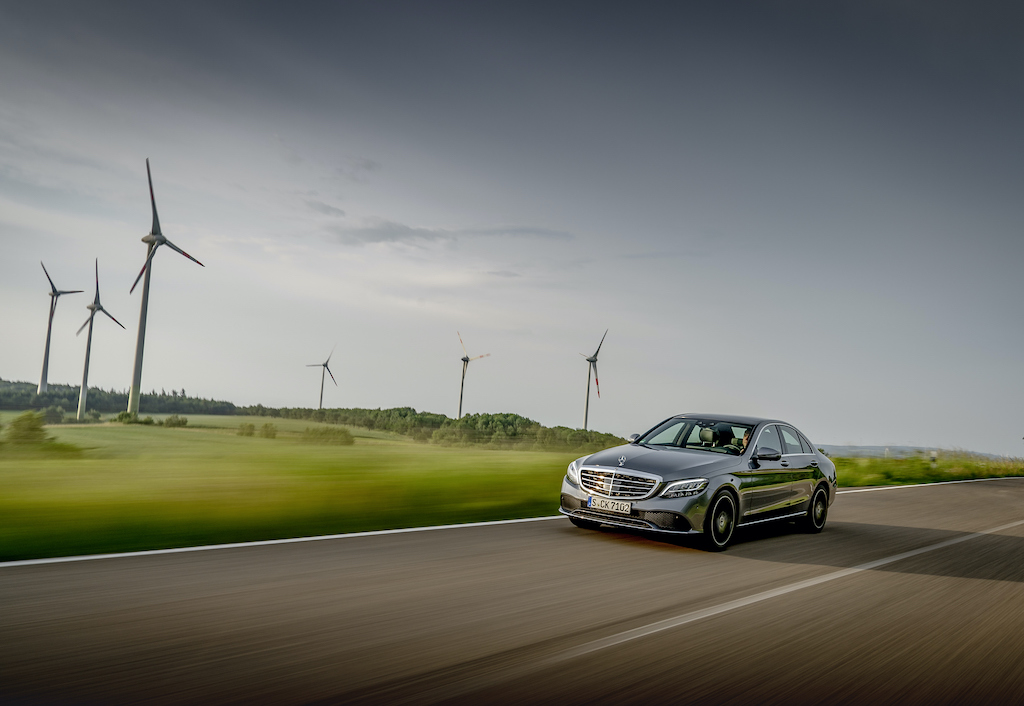 While Mercedes says this particularly C-Class is almost 50 per cent new, the car itself has changed little. It looks classy and handsome. It remains the most comfy and composed small saloon on sale, with even more refinement, tech and luxury inside to galvanise its position as a cut-price, scale-model S-Class. The interior is well-loaded with good quality levels.

However, the C Class fights back with an affordable mild hybrid alternative to petrol or diesel power. If that doesn’t take your fancy, there are also more performance-orientated petrol engines.

It’s never anything less than unstressed and unruffled to drive, creating surely the most relaxing driving experience in its class. For many, that will be exactly what some people are looking for.