From the Vikings of the first millennium to the paratroopers of the Second World War, including the pirates of the 17th and 18th centuries, the skull has always been a very prominent warlike symbol. Historically, the most formidable fighters displayed their bravery by wearing skulls, both to upset their opponents and to ward off bad luck.

Pirates flew their Jolly Roger atop the masts of their boats, terrorising ships’ crews struck by this black flag emblazoned with a skull and crossbones. At dawn on 6 June 1944, during the Normandy landings, paratroopers from the 82nd and 101st American Airborne Division emerged from the night wearing a badge on their jumpsuit that bore a skull and these words: Death from Above. The series of SKULL watches by Bell & Ross pays tribute to these experienced and outstandingly courageous military personnel.

Aside from its warlike significance, the skull, an accepted sign of death, has a philosophical meaning as it symbolises the fragility and brevity of life, particularly in vanitas works of art. Memento mori (remember you must die) recall gruesome depictions in ancient paintings or in curiosity cabinets owned by humanists from the Enlightenment. 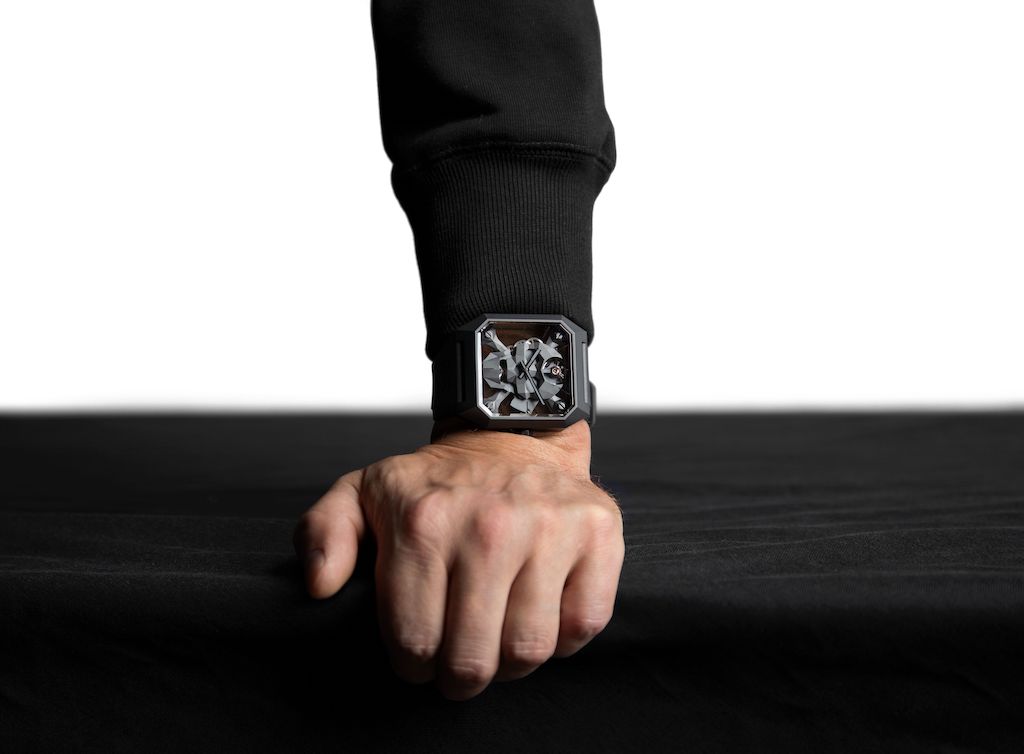 Mexican tradition celebrates the Day of the Dead in the month of November, and it is a time for mocking death by wearing the famous calaveras, brightly coloured decorated skulls. This irony is expressed by the BR 01 CYBER SKULL in revealing a mischievous smile when its mouth is opened. It has a timelessness displayed in its faceted relief, conveying an ancient symbol in an ultra-contemporary style.

Bell & Ross unveiled the BR 01 CYBER SKULL. This timepiece revisits the art of the skull watch. Its design is far from the vintage style usually associated with the Skull, to establish itself in contemporary modernity. It projects this art born in the 20th century into the future. A watch with several faces, it is where watchmaking, design, symbolism and bold creativity meet.

In 2009, the BR 01 SKULL was one of the first to follow in the footsteps of this skull trend, with many manufactures later following suit. This first collection also included two versions set with 415 and 672 diamonds.

In 2016 the BR 01 BURNING SKULL combined military symbolism and the art of tattooing. Its case, engraved with sparks, was decorated with a black lacquer reminiscent of the ink used by tattoo artists.

In2018, BR 01 LAUGHING SKULL welcomed a new skull watch, fitted with one of the brand’s automaton movement. The jaw of the skull on its dial appeared to smile when activated. 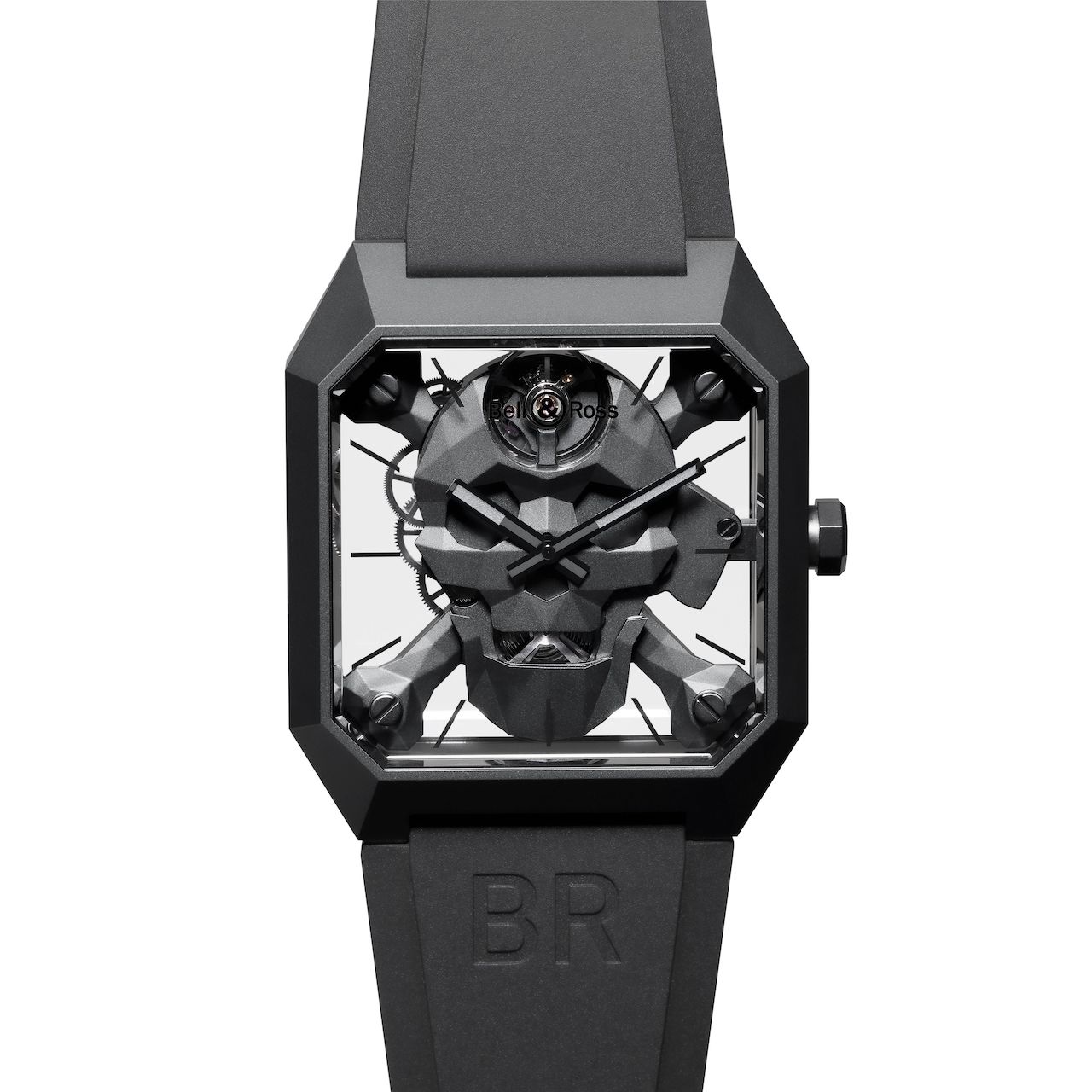 The brand-new BR 01 CYBER SKULL marks a break with style. It turns a page. Its avant-garde design sends this iconic series into the future. Not only that, the Bell & Ross brand as a whole has launched itself towards an ultra-modern shape. The futuristic CYBER SKULL opens a door to the future.
Sculpted like a steath plan with its cut sides and sharp edges, the angular silhouette of the BR 01 CYBER SKULL is reminiscent of that of certain fighter planes described as invisible. Its case is modelled like the fuselage on an F117 fighter plane. To disappear from the radar and seem invisible, these bombers had faceted fuselages that waves would ricochet off. All their surfaces were faceted, making them almost undetectable to radars. 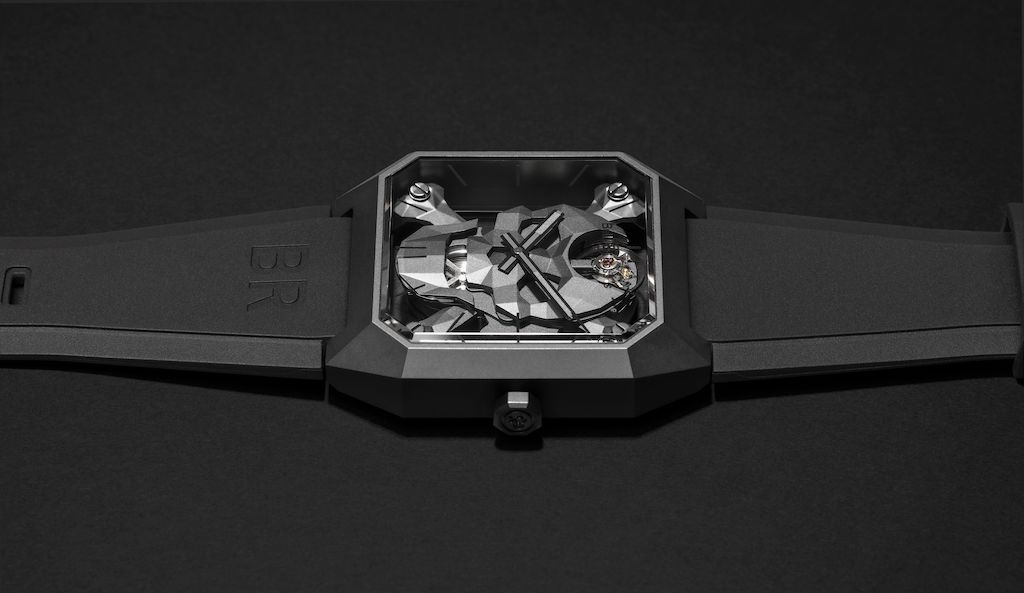 Bell & Ross has chosen to adorn its CYBER SKULL with black matte ceramic. This anti-reflective colour is also used on some military vehicles. Its glazed superstructure is reminiscent of the canopy on a jet.

Each element of the watch, the case middle, bezel, crown, skull, crossbones, is structured within the many faces that sculpt the surfaces, creating volumes and a 3D image. 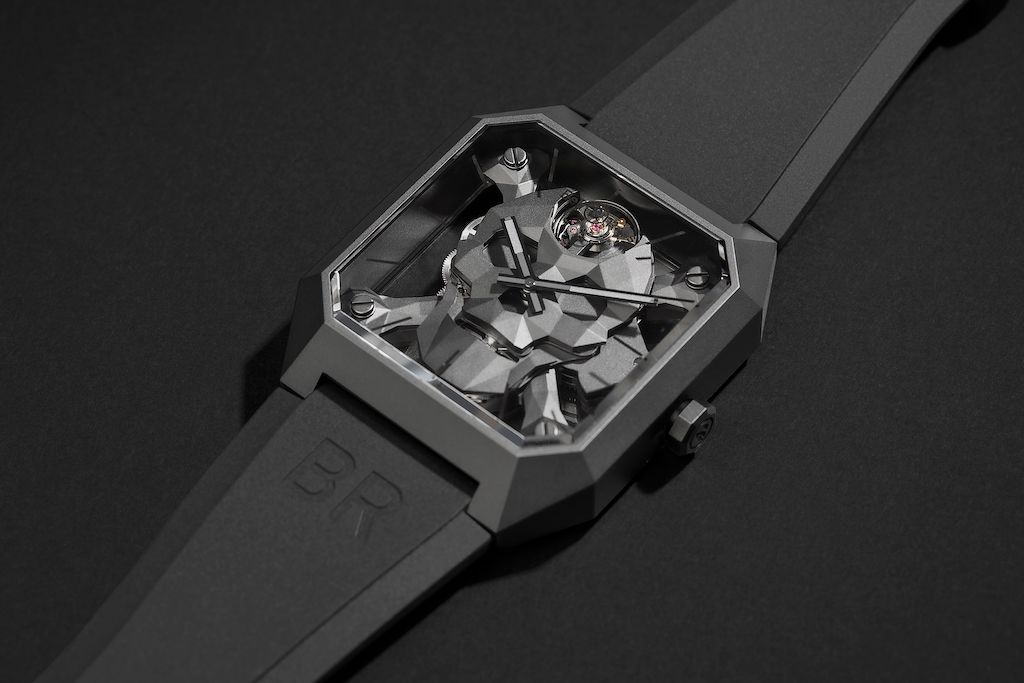 Behind its provocative, symbolic and artistic face, the BR 01 CYBER SKULL hides the secrets of an automaton watch belonging to the world of Haute Horlogerie.

Unifying, it can move art lovers and aesthetes in the same way it can move watch collectors. This ultra-modern watch pushes the watchmaking brand into the future. It opens a door towards… new horizons.