Some small cars are cheap and feel it, others have a premium price tag without giving you much extra for your money. And then there’s the Skoda Fabia! 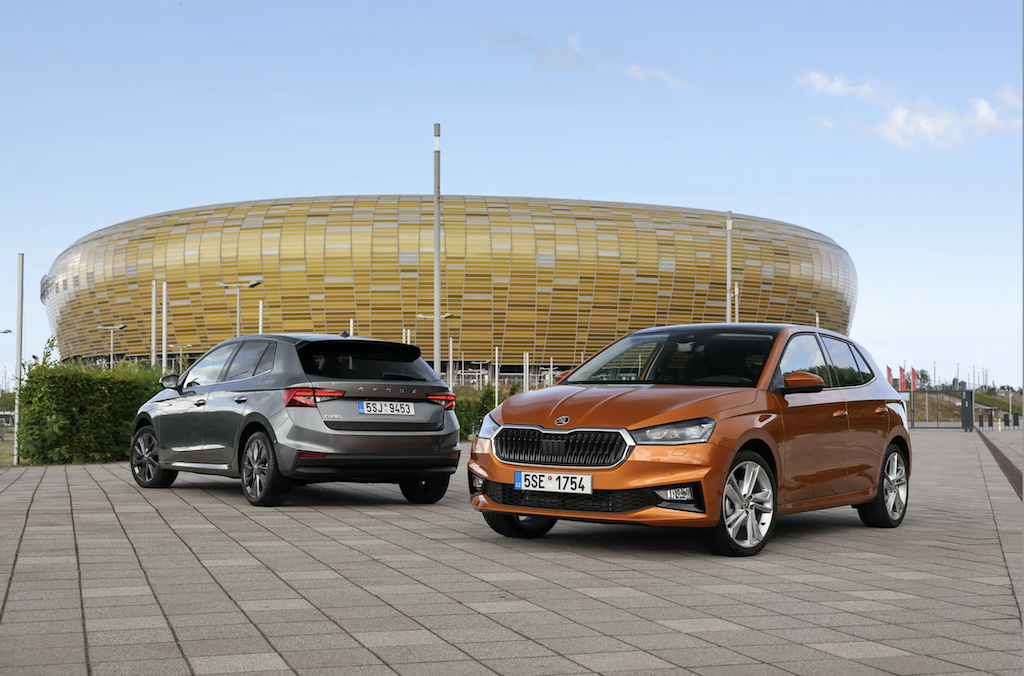 The Skoda Fabia is a small hatchback that shares its mechanical bits with the Volkswagen Polo and Seat Ibiza, but it has always been the most sensible option of the trio. It’s the most practical and usually the cheapest, but by the past has never been the most exciting or upmarket version.

That direction has been continued here on the design front, with the new Fabia featuring Skoda’s recognisable Ned Flanders moustache-like grille, simple but effective creases and smart alloy wheels – nothing to set the heart ablaze, but completely inoffensive. 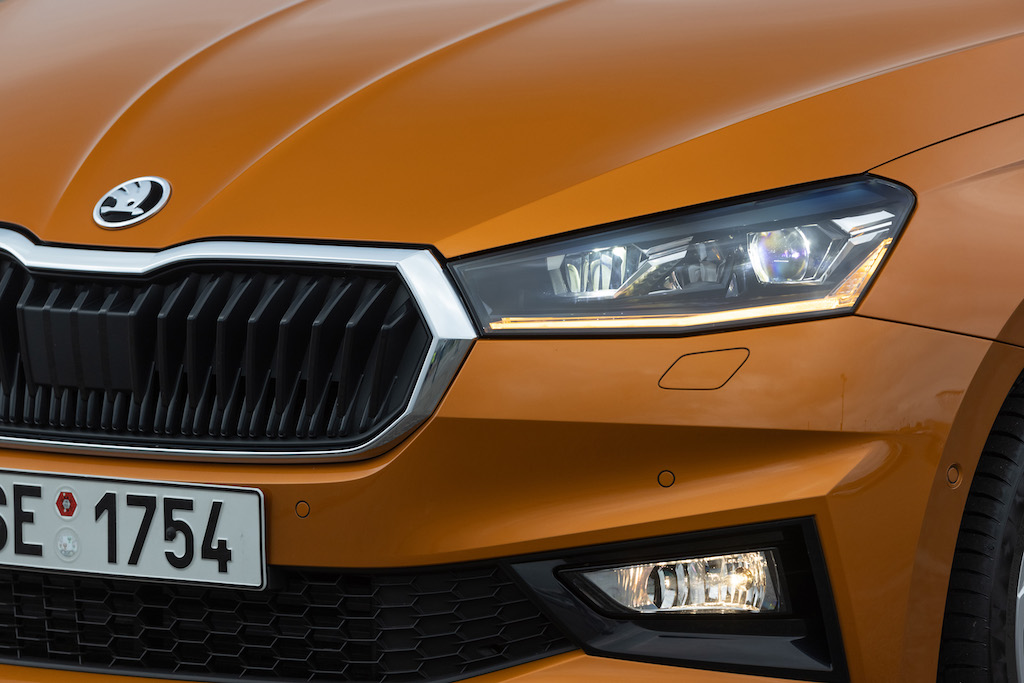 The fourth generation Skoda Fabia supermini, the smallest and cheapest Skoda you can buy. Skoda’s proud of the fact it’s sold more than 4.5 million since the Fabia first went on sale in 1999. It was that first-gen car that really established Skoda as a credible carmaker after years of quips and jibes at the Czech firm’s expense.

So with the demise of the Citigo it’s up to the Fabia to provide a smooth entry into the Skoda range. What with all the giant SUVs knocking around it’s looking smaller than ever, even if the new car has stretched beyond four metres in length for the first time. Want proof cars of all types have grown in the last 20 years? The new Fabia’s 2.56-metre wheelbase is longer than the original 1996 Octavia’s, even!

On the outside at least, the Fabia punches well above its weight class: it’s clean and unfussy, yet still has just enough bits of design to mark it out as a new-gen Skoda.

Skoda has put much effort into formulating a classier family look of late, with a bit more uniformity across the range. The Fabia certainly looks more purposeful in the metal than the pictures suggest, but the design isn’t as distinctive as it once was. To our eyes the rear has a generic look of Ford Focus about it, but the front end is unmistakably Skoda, with the vertical grille slats and bonnet creases.

The looks only get better with the Monte Carlo trom, which adds a black grille, rear diffuser and black 17- or 18-inch alloys. Specific front and rear aprons complete the look, and legitimately elevate the Fabia to an even more premium-looking car.

The Skoda chief designer Oliver Stefani avoided controversial idiosyncrasies like cryptic touch sliders, obscure ergonomic push zones and hidden puzzle corners inside. Instead, his team created a cockpit which is self-explanatory, free of pointless redundancies as well as logically structured.

The interior of the Skoda has been smartened up compared to its predecessor, but it’s relatively simple. The driving position in this car is excellent, and it’s easy to set everything up just how you want it, although entry-level S models don’t offer seat-height adjustment. 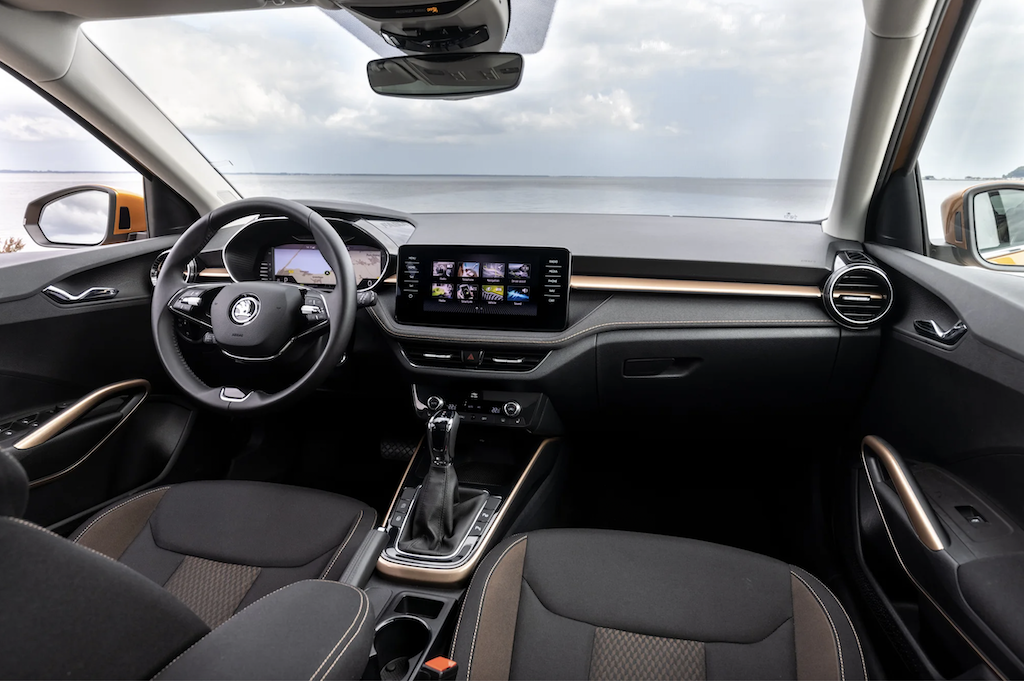 There are proper buttons and dials to control the air conditioning, so changing the interior temperature isn’t too distracting.

Colour Edition models come with a digital driver display behind the steering wheel, while cheaper trims have analogue instrument dials. Both setups are fine, but the digital display lets you put more information (navigation maps and so on) right in front of your eyes.

For starters, the windscreen and middle pillars are much thinner than they are in those rivals, so you have a clearer view out at junctions and roundabouts. 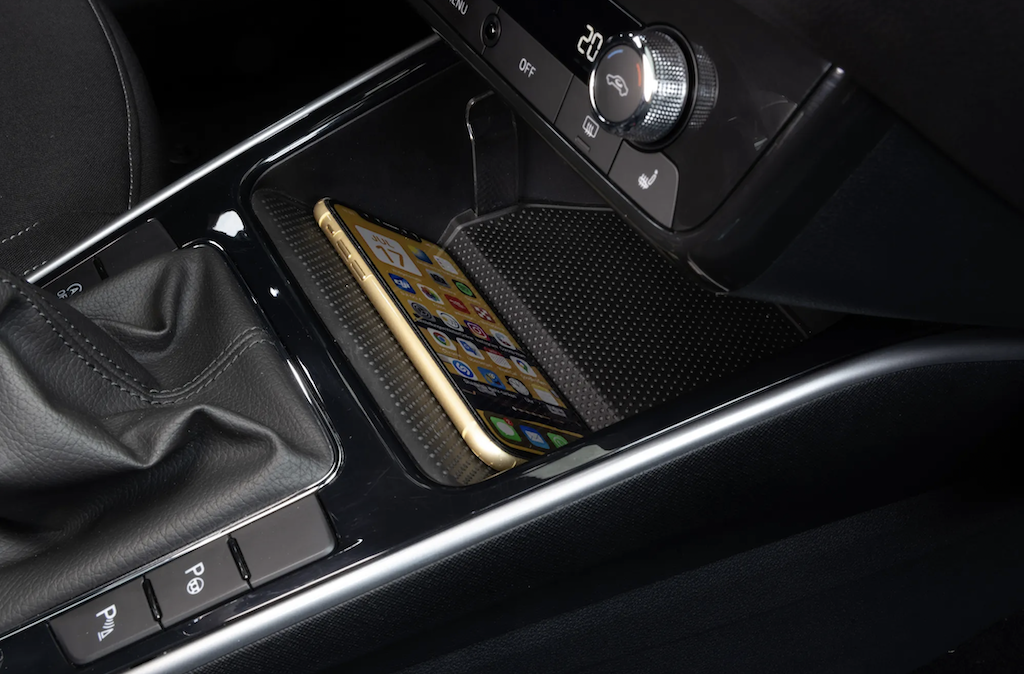 Also the rear glass area is larger than on most small cars, which makes parking easier.

SE Comfort and SE L models have rear parking sensors to help you out a bit more, and you can pay extra for sensors at the front of the car. A reversing camera will be available from 2022. Basic LED headlights are fitted to all versions, although full LED headlights are optional and available only on range-topping SE L trim.

It always comes round to the touchscreen when you’re talking about a Volkswagen Group product these days. The infotainment screen starts out at 6.5in as standard, working its way proportionally up in size as you ascend the range through 8.0in and the top-spec 9.2in unit. In that last one gesture control becomes standard and you can spec a digital voice assistant – Laura – who speaks 15 languages! There are buttons for all the things you’d like buttons for (i.e. aircon), and the touchscreen itself is responsive and useful. You turn the aircon on by twisting the temperature knob, but to change the fan speed you have to press the menu button and finish your business on the screen. 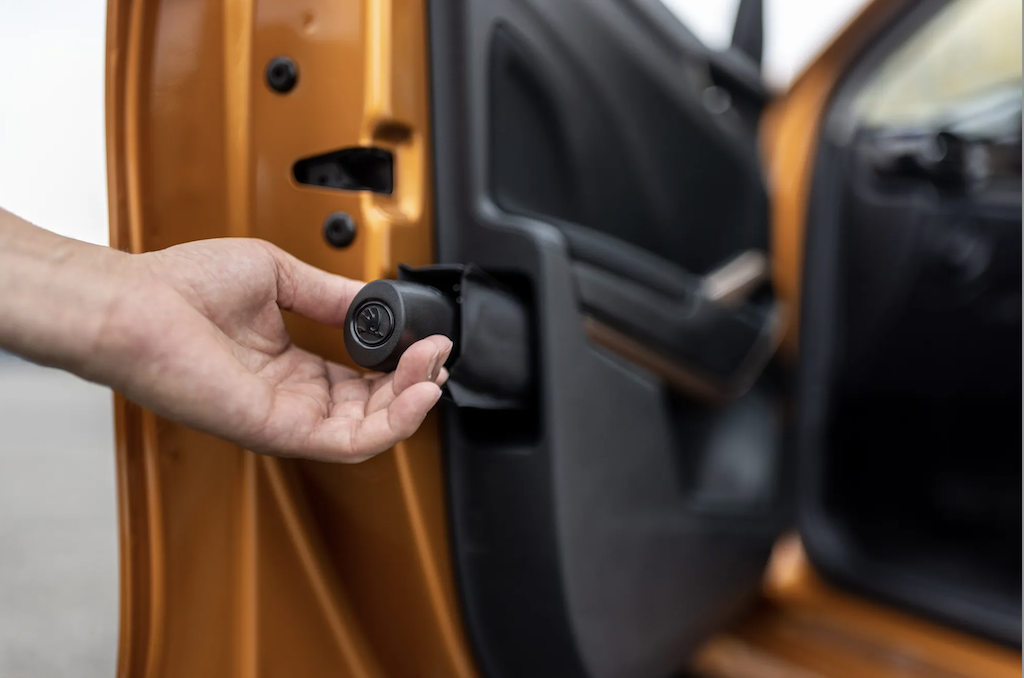 There’s storage space to match, including well-sized door bins, trays, cubbies and a massive glovebox. The rear space in the Fabia isn’t quite up to the standards set by the Jazz. It matches the Seat Ibiza, though, and is far more accommodating than the Ford Fiesta. As long as the front seats aren’t slid all the way back, you’ll be able to carry two tall rear passengers without any moaning. It’s a tight squeeze for three adults in the back and there’s a hump on the floor that hampers leg room for the person in the middle. There are some appealing touches in the back, including the rear air vents (something of a rarity in this class) and pockets on the backs of the front seats for maps and mobile devices.  Boot space in the Fabia is very impressive, enough big to carry the luggage for a weekend for 4 people. Someone at the company has counted 42 of its ‘Simply Clever’ solutions in the new Fabia, with four of them making their debut on the car. Old favourites include the ice scraper in the fuel flap (complete with tyre tread depth gauge) and the umbrella hidden in the door. 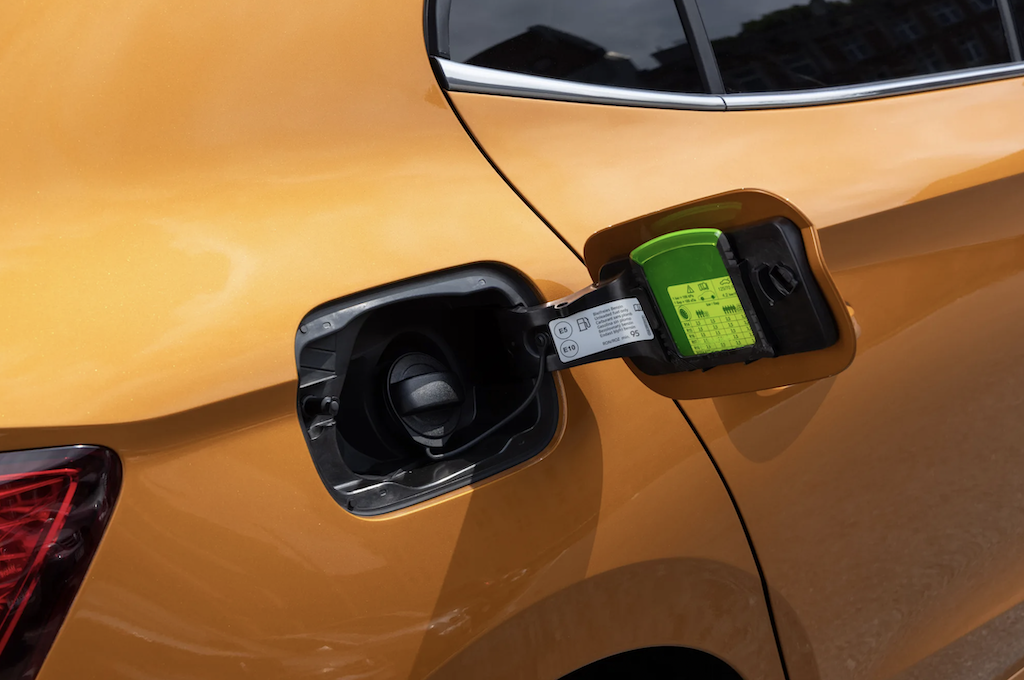 The range of engines Skoda offers for the Fabia is simple, too. They all run on petrol and produce between 64bhp to 108bhp. It’s not all about simple stuff, though. The Skoda Fabia’s entry-level 1.0 MPI 80 engine does without a turbocharger. it takes more than 15 seconds to get from 0-100km/h, so expect seriously weedy real-world performance. You only consider this engine if you’re a dedicated town driver. The turbocharged 94bhp 1.0 TSI 95, which can do 0-100km/h in around 10.5sec.

If you’re looking for a bit of extra oomph, the 109bhp 1.0 TSI 110 offers just that and, unlike the weaker engines, comes with a six-speed (rather than five-speed) manual gearbox . This is the only engine available with an optional automatic ‘box. The Fabia is chuckable hatch with a surprising amount of feel for the driver. Happy around the streets of city, but equally settled in the countryside, I noted the Fabia’s impeccable directional stability, failsafe handling and neatly weighted controls.

While the six-speed ‘box offers eco flexibility on the motorway, you don’t feel like you’re missing out with just the five gears. It’s just a shame there’s no electric version. You’ll be able to get comfortable very quickly though, as the Fabia has plenty of adjustment so you can find the right position. Add to that the comfort seats, which are excellent on longer journeys. 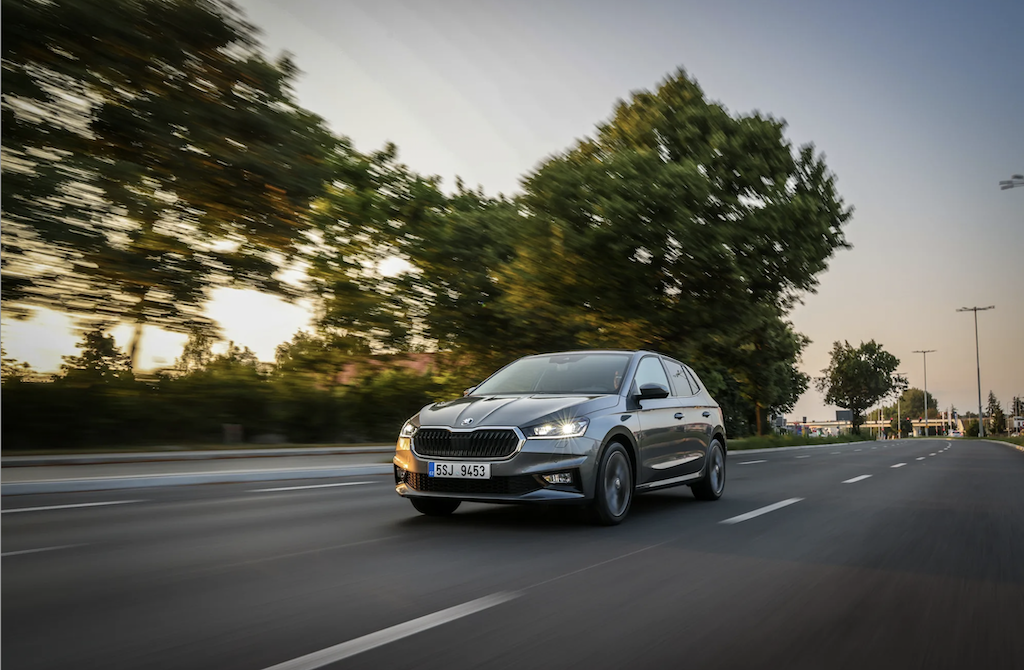 The Fabia is a relentlessly sensible drive – if it was a person, it would be the designated driver at a party. It’s stable and sensible on the motorway, brisk over a flowing country road but sure not to enjoy itself too much. Small cars haven’t traditionally been particularly attractive to those who want a smooth, pampering ride, but the Fabia is on a par for comfort with one of the best – the Volkswagen Polo. Either way, there’s plenty of grip but also a fair amount of body roll. The Fiesta and Ibiza are better choices if you want a taut, agile small car that will put a smile on your face. 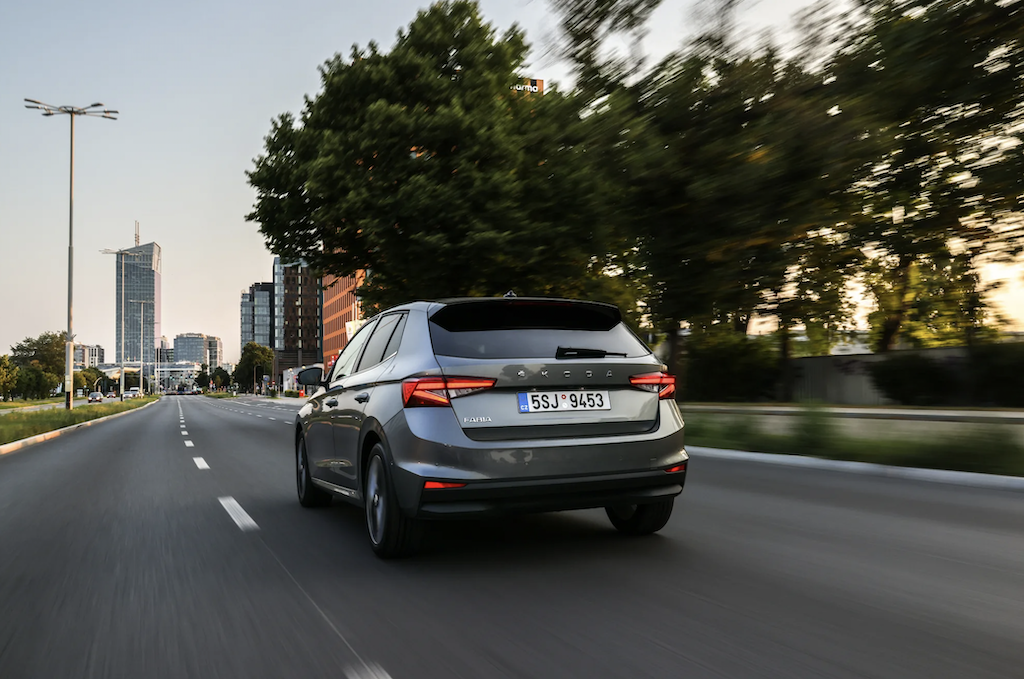 On paper, the latest Fabia is another Skoda which beats its VW and Seat stablemates at their own game. The 2022 Skoda Fabia has ditched its boxy appearance in favour of a far more sleek and stylish look.  It’s roomy, handsome, well-built, easy to use and should be cheap to run. Good to drive and with a quality interior, the dynamics aren’t game-changing, but the refined go-kart handling it offers should be more than enough for most people. It’s already a compelling package – particularly in the value stakes – though the Monte Carlo adds a dose of premium if you really want it. The Skoda Fabia is definitely worth having in your small hatchback considerations and should be in your final selections. It may fall down on some plush materials and excitement, but it won’t disappoint for practicality.

Written by: Frederick Boutry on July 19, 2022.
Tags from the story
Best small car, Fabia, skoda
Facebook Twitter Pinterest
Google + LinkedIn Email
Written By
Frederick Boutry
More from Frederick Boutry
The Fiat 500 has been reborn as an electric car, but it...
Read More