Volkswagen’s T-Roc – a crossover, SUV or CUV (compact utility vehicle) depending on your preferred definition – has become part of the furniture over the last few years, even sneaking into top-ten best-seller lists every now and then. 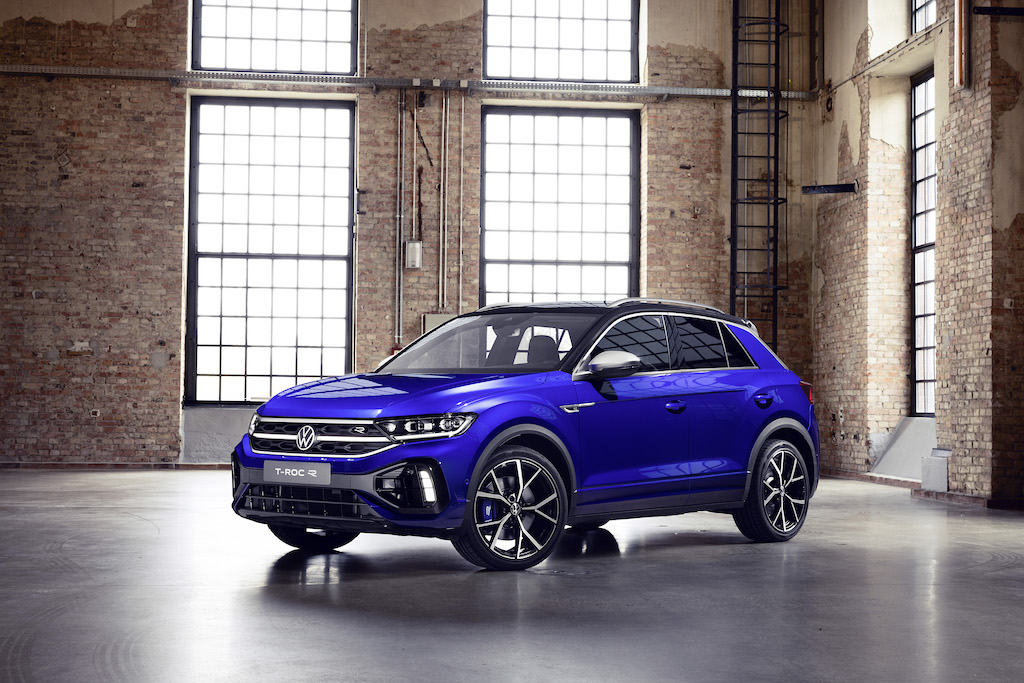 It’s almost surprising that it took Volkswagen as long as it did to get to this point. The VW Group already has the Cupra Ateca and the Audi SQ2 as fast crossover things, and a quick glance at the headline stats would seem to suggest that all it took to create this new T-Roc R was a transplant of all the important bits from the Golf R.

Volkswagen has refreshed one of its hottest models for 2022. This is the T-Roc R, which like the rest of the brand’s T-Roc lineup, including the standard model and a Cabriolet, has been treated to a range of upgrades. 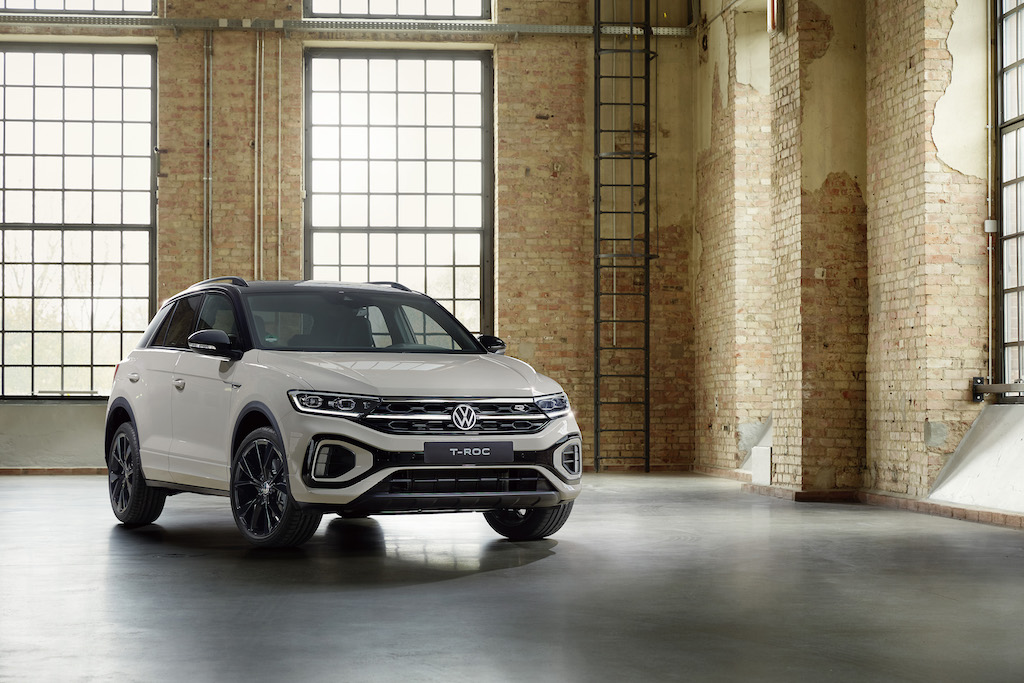 The revisions start on the outside, with the most distinctive change coming to the R’s face. And it looks pretty good, though. A redesigned grille now has a full-width daytime running light through its centre, blending neatly at each end into tweaked LED headlights.  The same purposeful-looking front and rear bumpers – the latter still housing the four fat tailpipes that are a signature of R models – remain, with a subtle change at the rear made to the badging. Here, the T-Roc designation has been dropped altogether, and the new, larger R badge sits just beneath the VW logo.

To match the muscular swagger of its exterior bodykit, the interior of the Volkswagen T-Roc R features a flat-bottomed steering wheel, a good few ‘R’ emblems and a pair of figure-hugging front sports seats. Those seats hold you in place really well during hard cornering. Plus, they remain comfortable even after hours in the saddle, partly thanks to the wide range of adjustment they offer, including for lumbar support.

Thin windscreen pillars and a raised driving position mean you have a good view of the road ahead, too, although it’s worth noting that you sit higher in the Cupra Ateca.

Thick rear pillars restrict your view out of the rear window, but front and rear parking sensors are standard.There’s the option of a rear-view camera or a bird’s eye view camera to make manoeuvring even easier, while bright LED headlights are standard and provide great illumination at night. The disappointment when the T-Roc R first came out was the quality of the materials. However, this was addressed as part of the car’s mid-life facelift, when it gained a soft-touch upper dashboard and a piano-black climate control panel. 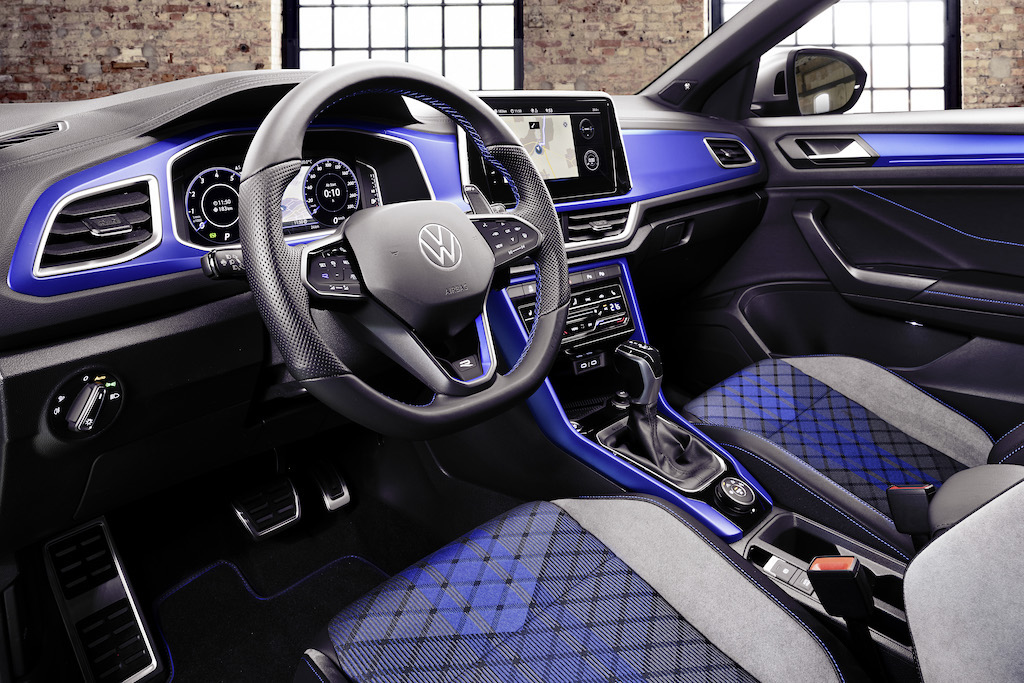 The T-Roc R’s infotainment touchscreen is easy to use, because its menus are logically laid out, there’s a rotary knob for scrolling up and down lists, and Android Auto and Apple CarPlay smartphone mirroring are standard. The system is augmented by a large digital instrument panel in place of analogue dials. This is highly configurable and able to show you lots of useful information, including sat-nav mapping, the audio menus and trip computer.  The door bins are wide, too, and there are several useful storage cubbies dotted around the driver. 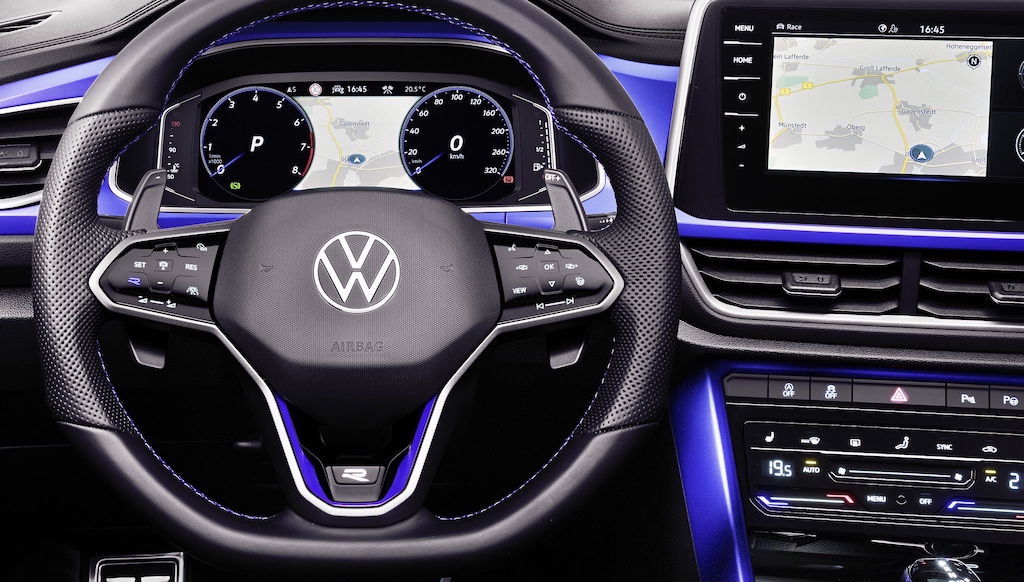 Cabin space is fairly reasonable front and back, though the four-wheel drive system takes up a little boot space, so you get 392 litres out back instead of the 445 litres you get in lesser T-Roc models. It’s still a decent size, though.

The engine is the same 2.0-litre turbo producing 296bhp and 295lb ft of torque, the gearbox is the same seven-speed DSG, and the all-wheel drive system is – yep you guessed it – the same 4Motion system as in the Golf R. The sprint from 0-100km/h is shrugged off in 4.9 seconds, and it’ll keep going until it butts into a speed limiter at 155mph. The T-Roc R’s most decisive advantage is in the way it handles. From its quicker-reacting steering and tighter body control to its vice-like grip on the road, it feels more like a hot hatch than a sports SUV and will leave its sister cars behind on a winding road.

On the windy road, the steering is direct and the 4WD system will keep the T-Roc R remarkably stable – especially given that more of the weight lives higher up than in the hatch or estate. Perhaps that reflects the audience that the T-Roc is aimed at.

Perhaps Volkswagen’s biggest achievement here is the (optional) adaptive damping. In Comfort mode the T-Roc R is manageable in town. It’s not flawless, but even with 19-inch wheels the ride isn’t backbreaking. Moving into Normal ( it feels like a Sport mode) and Race modes, the suspension firms up and body roll is kept to a minimum. It even tempts you to attack a few hairpins. That’s not something we’d expected to admit about a crossover, but the presence of chunky brakes from the Golf R Performance Pack certainly helps. 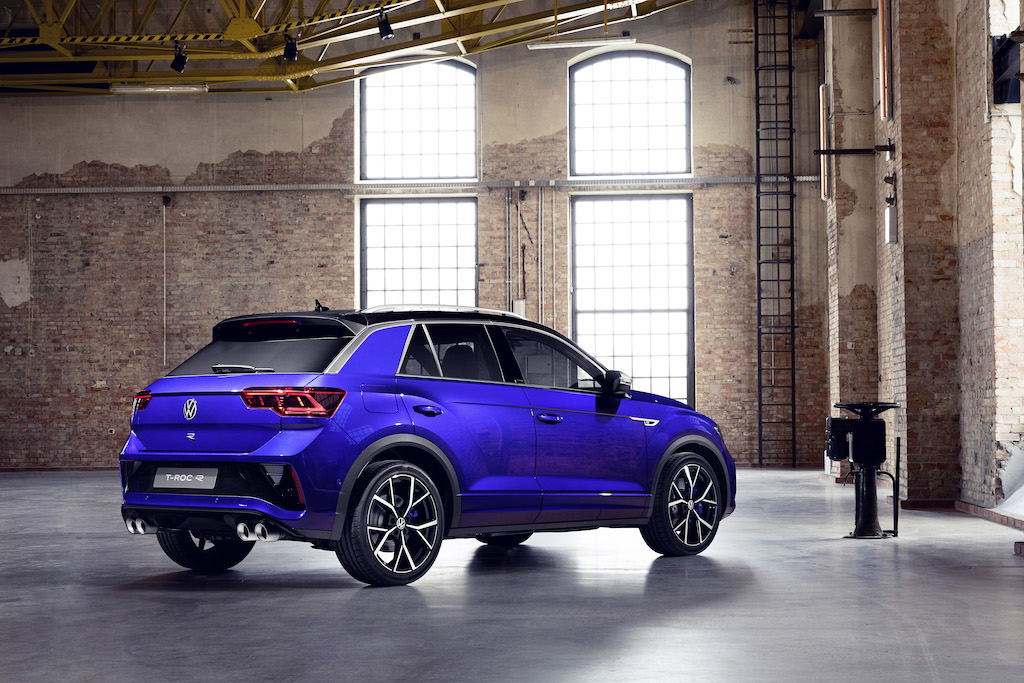 The Volkswagen T-Roc R has a higher list price than its Audi SQ2 and Cupra Ateca, but it’s not a significant difference, and it’s actually slightly cheaper than the Cupra Formentor 310. More positively, standard equipment is generous, with a list that includes 19in alloy wheels, dual-zone climate control, ambient interior lighting and adaptive cruise control. It’s an extremely confident, quick and grippy thing, although the clinical interior might make it difficult for some of you to fall in love with.