The Jeep Compass is yet another entrant into a crossover market segment that now contains enough distinct models and derivatives to stretch twice around the globe if you laid them all bumper to bumper. Perhaps. Indeed, for a vehicle manufacturer that pioneered the rugged, go-anywhere ethos of what would become the lucrative sports utility vehicle market sector, it has taken an unfeasibly long time to come up with a truly credible competitor in the compact-SUV market sector. 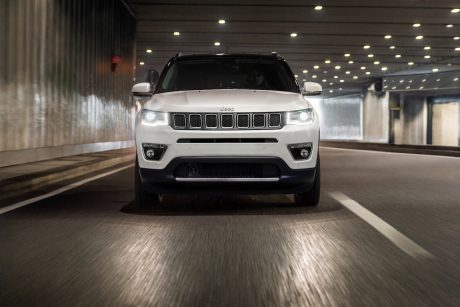 The Compass attempts to marry somewhat contrasting aims of being a hard-wearing, all-terrain 4×4 and a stylish, comfortable mode of family transport. Previous Jeep Compass models were boxy, ugly and unattractive, but the new version that sits between the smaller Renegade and bigger Cherokee is altogether more stylish. 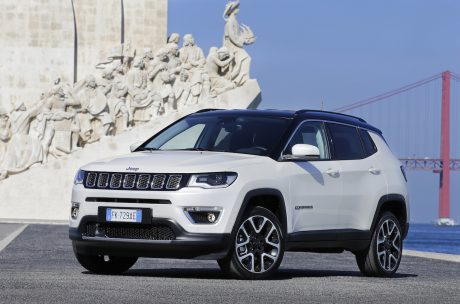 Admittedly from a very low base, Jeep’s presence in Europe is multiplying. Momentum is building because it’s making cars that suit European conditions. The Renegade was the first of them. Now the Compass, which has the potential to do better again, as it’s aiming at the biggest-selling part of the SUV market. It’s the size of a Qashqai or Tiguan or Kuga or Sportage.
The design is a strong point. At the front, Jeep’s trademark seven-slot grille is modernised, and the flanks carry strong half-hexagon blistered arches and a thick upward-tapering D-post. A chrome strip runs below the roof-line, then neatly flicks down to run under the rear window, and up again the other side. The proportions look tough and capable 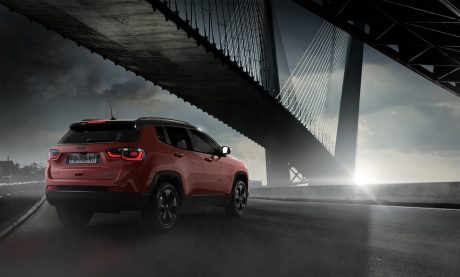 Those expecting a vivid reinterpretation of the funky Renegade might be disappointed upon first sight of the Compass. The Compass’s looks are rather more reserved than its little brother’s.
There’s plenty of adjustment for the front seats and steering wheel to allow the driver to get comfortable, while visibility is good, thanks to a high driving position that offers a good vantage point over the bonnet. 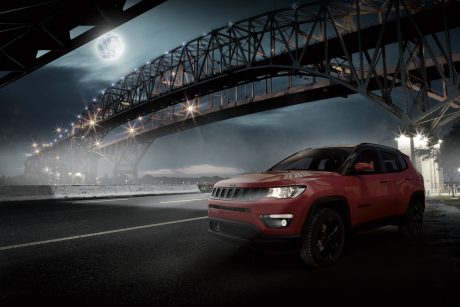 The dashboard layout is a little convoluted and cluttered, with most things controlled through the touchscreen infotainment system, but there are also lots of other buttons below it. The UConnect system does work well, though, with a bright, responsive screen and it’s simple to navigate through the menus.
The latest iteration of Jeep’s Uconnect infotainment system takes centre stage on the dashboard. It’s the first of the brand’s cars to get the fourth-generation system and on high-spec cars such as this Limited variant you get an 8.4in touchscreen, which responded swiftly to pushes, prods and ‘pinch and zoom’ commands. The presentation of the satnav maps is fairly simple, which is actually no bad thing when it comes to legibility while on the move. 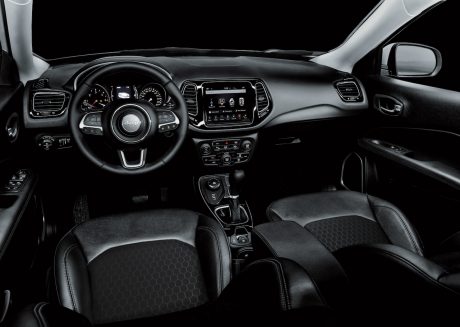 Sensibly, the touch-screen isn’t overburdened with functions best left to hardware switchgear. The climate controls are on the console, albeit duplicated on the screen if that’s your preference. Next to them are buttons that let you defeat the lane-keeping and ESP. Then the 4WD system controls. Oh and the steering wheel has 16 buttons on the front (cruise, menu and phone) and another 6 hidden on the reverse of the spokes (audio). But it’s all laid out logically enough to be useable. 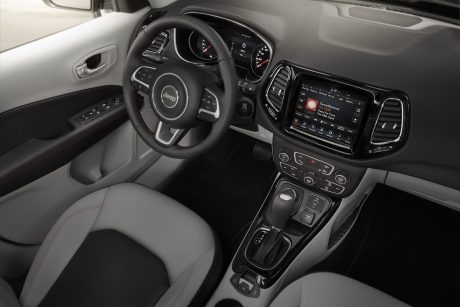 The boot itself is broad but shallow in my test car, but that’s because under the floor is an optional full-size spare wheel, something off-road adventurers will be relieved about, especially when you got a flat tire in the middle of nowhere… With a space-saver, there’s a multi-level floor and more cargo space.
There’s a generous amount of safety features as well, including six airbags, forward collision warning and lane departure warning, while blindspot monitoring and rear cross-path detection are included from Limited trim upwards. 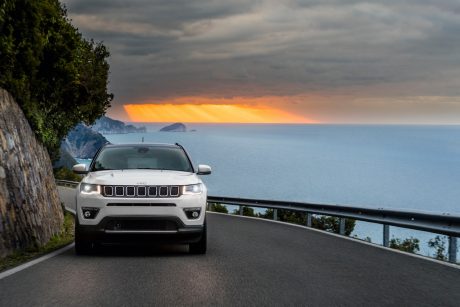 The Compass is available with a 1.6-litre or 2.0-litre diesel engine (the latter with either 138bhp or 168bhp), as well as a 1.4-litre turbocharged petrol (also in two outputs). A nine-speed automatic gearbox is available with the 2.0-litre diesels, and both get four-wheel drive as standard.
The SUV’s engines are reasonably efficient but the diesels are a little harsh, and the automatic gearbox option seems more set up for off-road use than sporty road driving 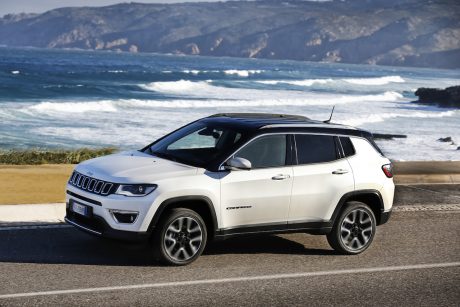 Jeep’s quest for go-anywhere versatility also means four-wheel drive features heavily across the Compass’s model range, although some front-wheel-drive variants are offered.
You can lock the Compass in four-wheel-drive at the push of a button if you choose, and also a ‘Selec-Terrain’ driving mode rotary dial with four custom modes: Auto, Sand, Snow and Mud. My test on dry roads was conducted almost exclusively in Auto mode.

Interestingly, Jeep went for a strut-type rear suspension instead of the multi-link that rival car-based 4x4s offer. The reason is it can give more travel, for better off-roading. If you really want to get serious off the road, wait a few months after launch for the Trailhawk version, which adds another pretty convincing layer of off-road hardware and software. 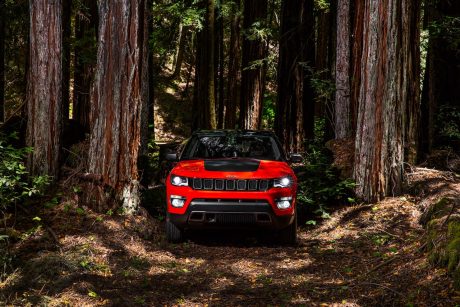 The well-tied suspension, as well as cleverly distributed torque through the 4WD system, does make this is perfectly capable thing through corners, even ones with lots of crests and dips. In that sort of regime the steering is accurate, too, if numb. Frankly though, in a family crossover, this talent is a bit superfluous, especially given that the engines really aren’t up for it. More plushness would have surely been a saner compromise. 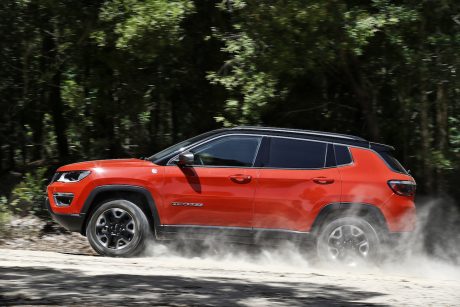 Apprently terrific off-road, especially in Trailhawk spec, but the Compass loses ground to rivals on tarmac. On the road, the Jeep Compass is not quite as planted as the best crossover rivals, but feels competent enough. There’s too much body roll if you attempt to take corners with gusto. The steering is decently weighted and the ride composed – at least on smooth tarmac – but the overall experience is less fun than the best rivals. 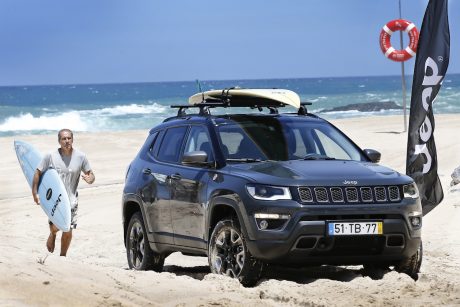 Don’t come looking for the happy, cartoonish cabin motifs of the Renegade. The Compass is more grown-up. Materials and finish are class-average, at least.
The main positives are that the Compass feels solid, dependable and is moderately successful in its bid to meld its makers’ trademark rugged vibe and abilities with a stylish, contemporary design and sufficient technology to match its rivals’ offerings.
People will buy it for the Jeep name, even if this Jeep’s substance doesn’t have the all-American feel that say a Ford Mustang does. But at the same time it’ll benefit from Jeep’s American branding of freedom and ruggedness!