The iconic Defender 4×4 has been reinvented, with an up-to-date, modern take on the original Landie that began life over 70 years ago.

The new Defender has a mountain to climb. Yeah, a real mountain, of course, because awesome off-road ability is an absolute necessity. But also, a metaphorical mountain. It’s got to replace the old on. A vehicle that was very widely adored, for the exact same reasons it was almost impossible to justify buying. 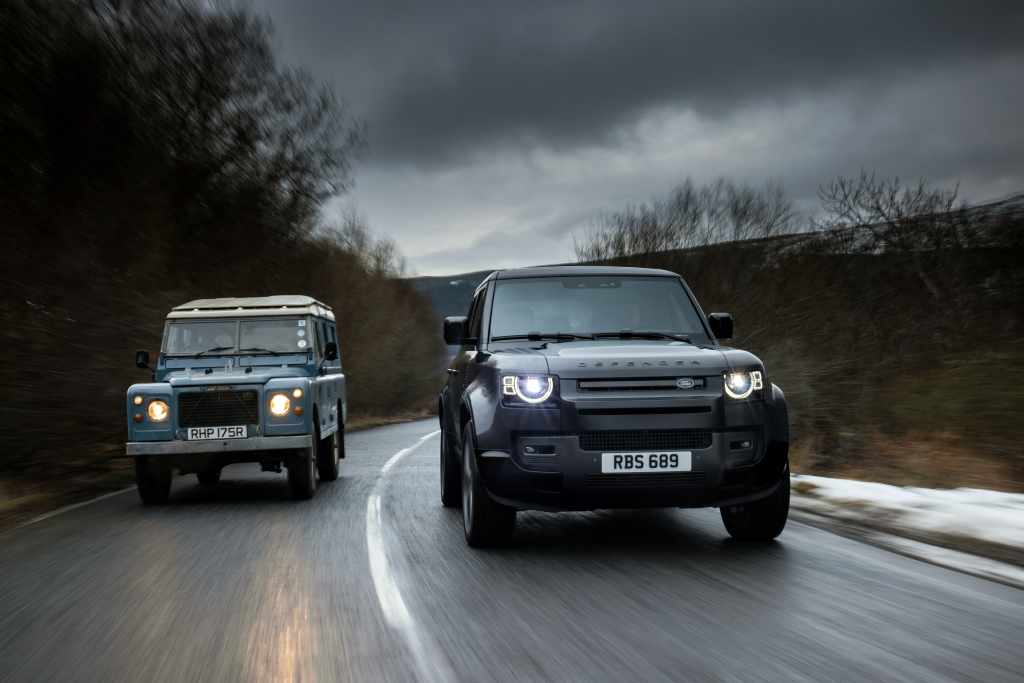 The previous Defender was very functional. Its ability to survive harsh and brutal conditions meant it was, frankly, itself far too harsh and brutal to be taken seriously as an everyday vehicle for most people. I drove one in the 80s. After having crashed two cars in only two months – soon after getting my driving license – my parents decided to put me in a Defender to ensure that I couldn’t drive too fast and to ensure that I would be kept safe in a collision. I drove it for many years and the Land Rover Defender will always have a special place in my heart. 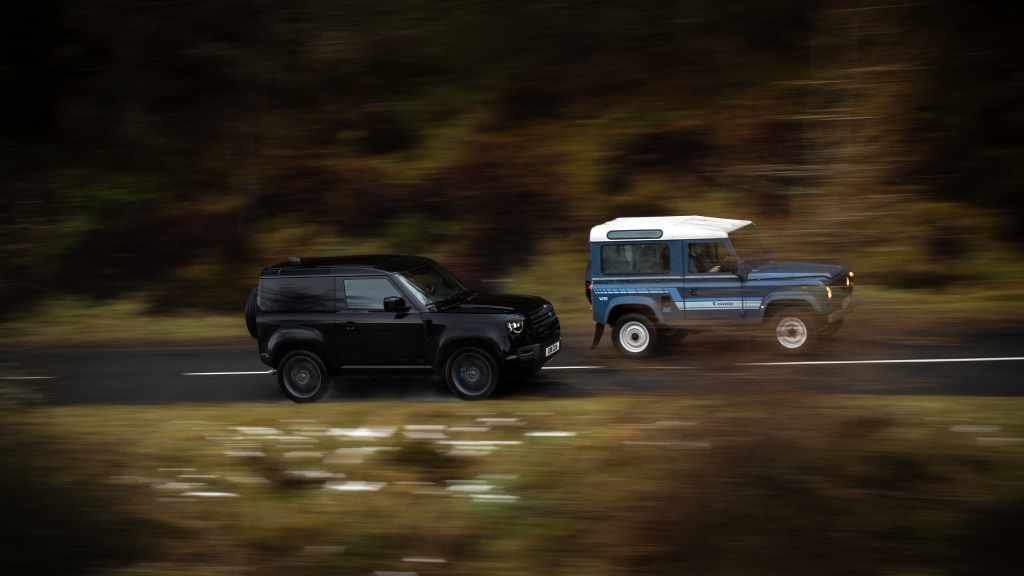 Naturally, when I went to pick up the new Defender for the test drive, I was super-excited and curious – how would this new version compare to the functional but beloved Defender of my memories? If it drives well and is comfy, will it get accused of blandness? And if it is smart and sophisticated, will it have abandoned the customers who made its heritage so authentic – the rescue services, the utilities, the true adventurers? 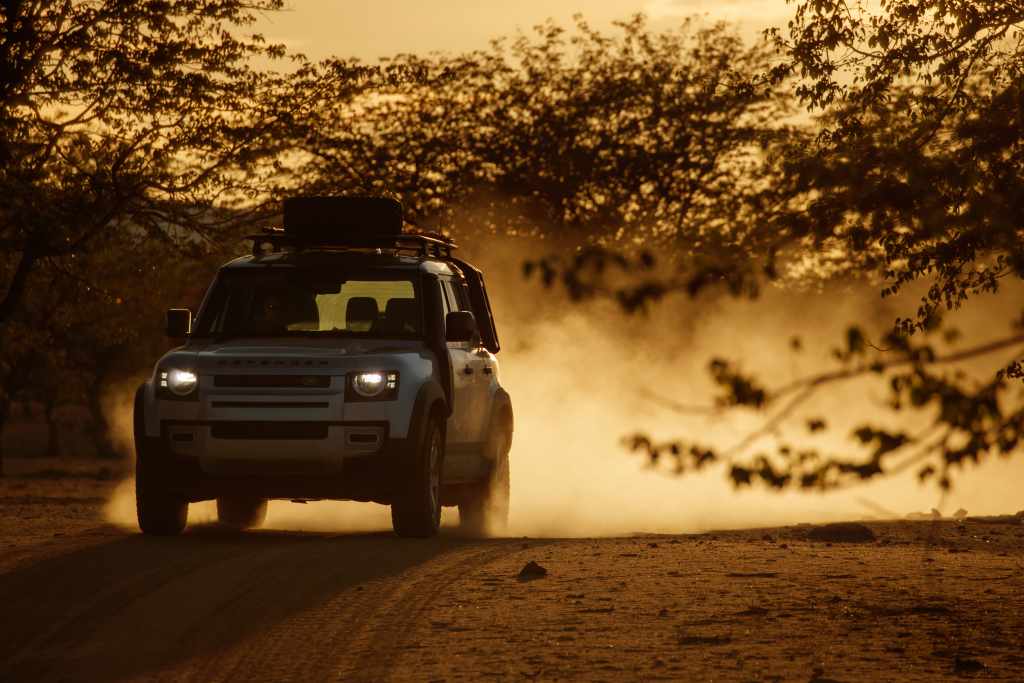 The new Defender simply has to be as capable off-road as the old one and it has to evoke the old one’s heritage, which is why it looks the way it does. Those two things were probably quite difficult to achieve, but if anyone could succeed, Land Rover’s engineers and designers would.

The exterior design is, I think, masterful. It invokes the old one yet it’s completely modern. Giving it a toy for boys look, the boxiness is just right for a hardcore SUV  It doesn’t only eke out the maximum carrying space, it also helps when you’re driving between obstacles because you know where the bodywork begins and ends. The short overhangs help off-road. But it’s subtly curved, not flat sided. Flat panels look makeshift and go wavy. The new Defender’s subtle curves look smart and solid. 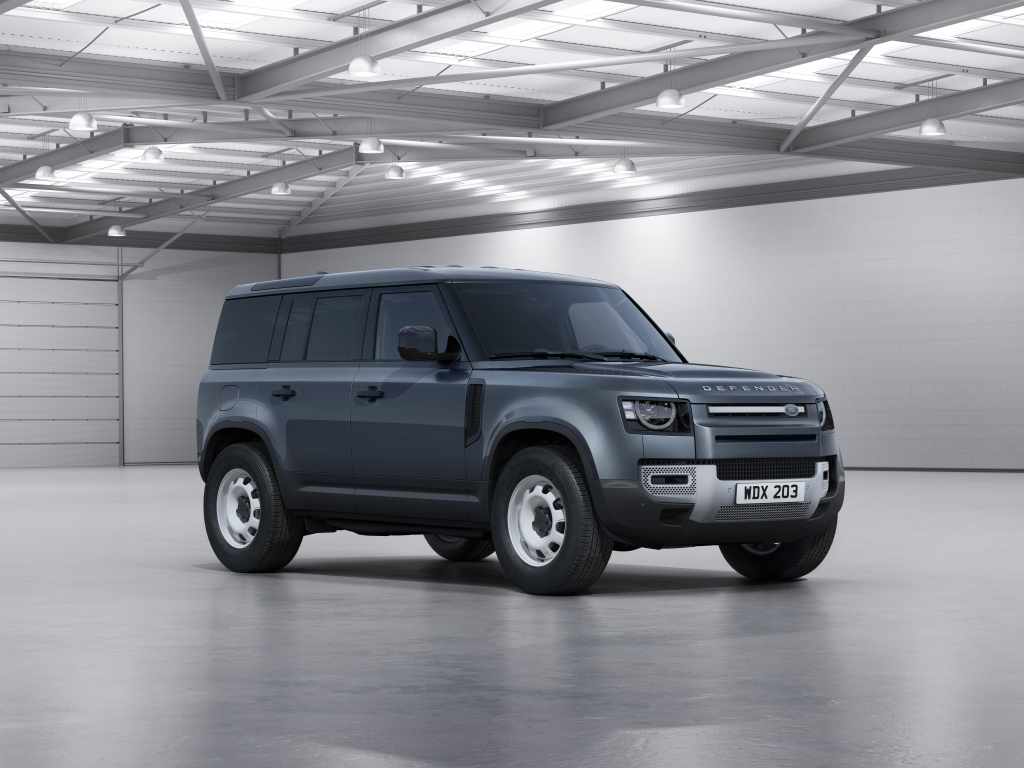 The proportions are clearly Defender-like, but everything is bigger, chunkier and designed with function clearly in mind. There’s no disguising that the Defender is a big 4×4. The three-door 90 model is 4,583mm long (including the spare wheel at the rear) and 2,008mm wide with the side mirrors folded-in. It stands 1,974mm tall, with the 110 version just a touch lower at 1,967mm. The five-door variant is unsurprisingly longer at 5,018mm, although overall width is the same as its smaller sibling. 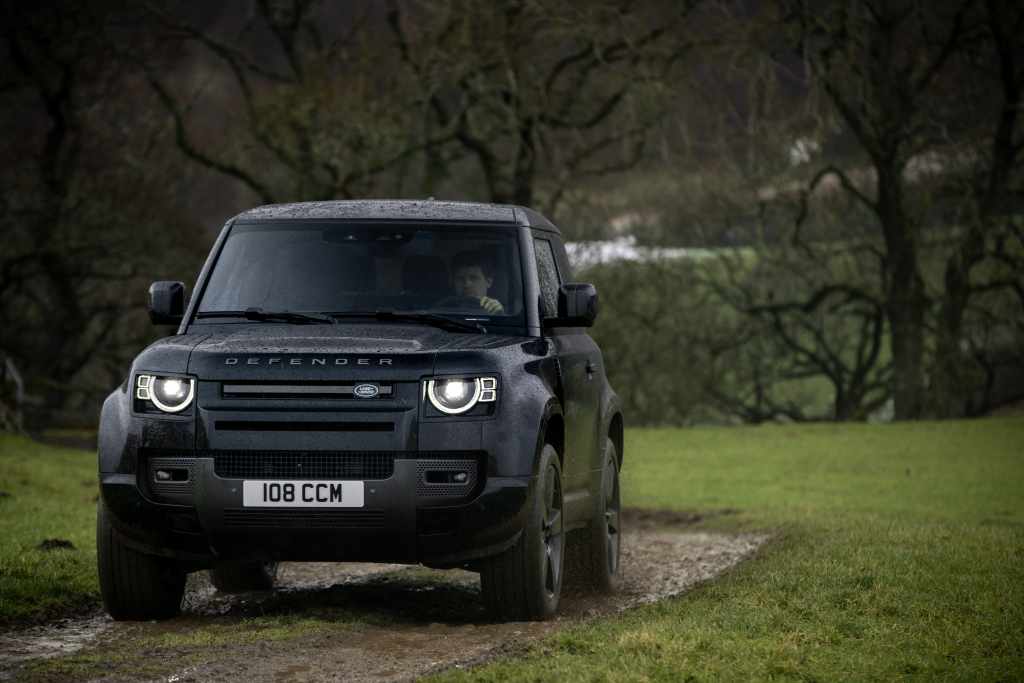 The Defender’s cabin walks the line between premium and utilitarian, with just enough design cues from the rest of the Land Rover lineup to make those familiar with the brand feel right at home. Exposed rivets in the door panels add a particularly rugged appearance, and a magnesium beam that runs the full width of the dashboard isn’t entirely cosmetic—it’s also structural.

The Defender is super-roomy too, with a wide cabin and loads of rear legroom. There’s plenty of room upfront in the cabin and, if you want, you can specify an extra seat between the driver and front passenger. In the 110 model, you can add a further two seats in the boot to make it a seven-seater, but strangely not when the front row middle seat is specified. The middle seats provide ample space and have a sliding function, which helps accommodate taller passengers in the third row.  Inside, there are exposed screw heads, powder-coated aluminium surfaces, a magnesium bulkhead and even strips of body-coloured metal. While it’s not the usual Land Rover level of luxury, it brings a unique and refined rawness to the cabin that is as cool as anything else on sale. 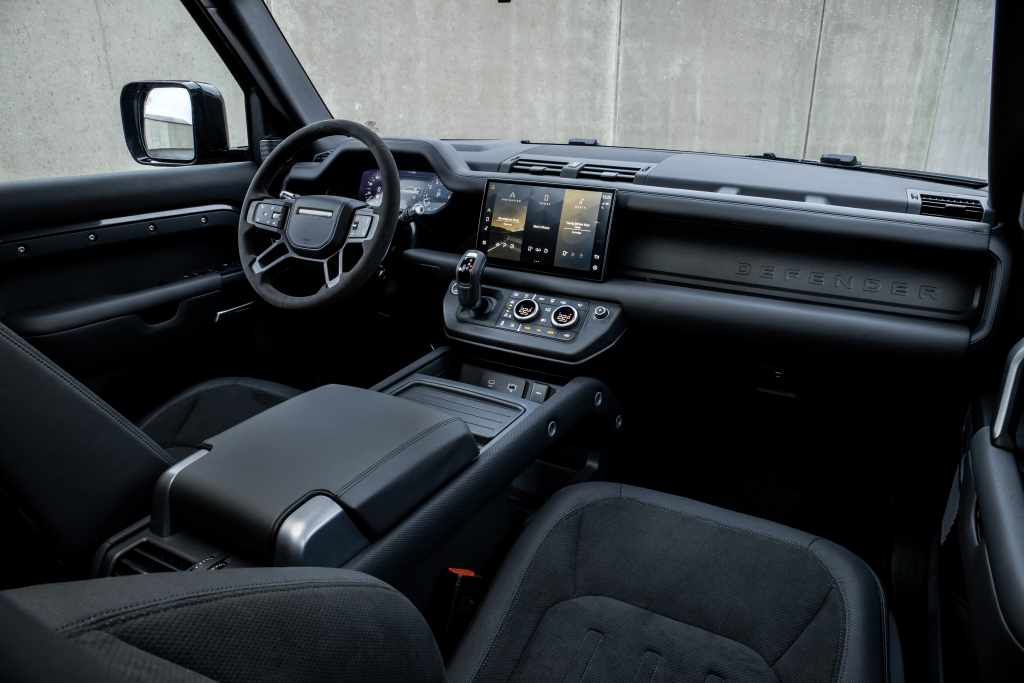 The top-spec X equipment line stands out from the crowd by offering a black-coloured roof and bonnet, Windsor leather seats, a 700w version of the Meridian sound system with an additional four speakers and a head-up display.

The 10-inch touchscreen is the slickest we’ve yet seen from JLR. The new Pivi Pro system allows over-the-air software updates and the latest Android Auto and Apple CarPlay connectivity.

In addition to the infotainment set-up, entry-level Defenders feature Land Rover’s Connected Navigation Pro, a 180W audio system with six speakers and an online pack with data plan. The Defender is brilliantly practical, including basics like the useful central storage bin and deep door pockets, as well as more advanced features like the standard 3D surround camera. There’s also the usual generous supply of cup-holders, power outlets and air vents around the cabin. Overall refinement is good and the front seats have plenty of adjustability, so you can easily find the most comfortable position. 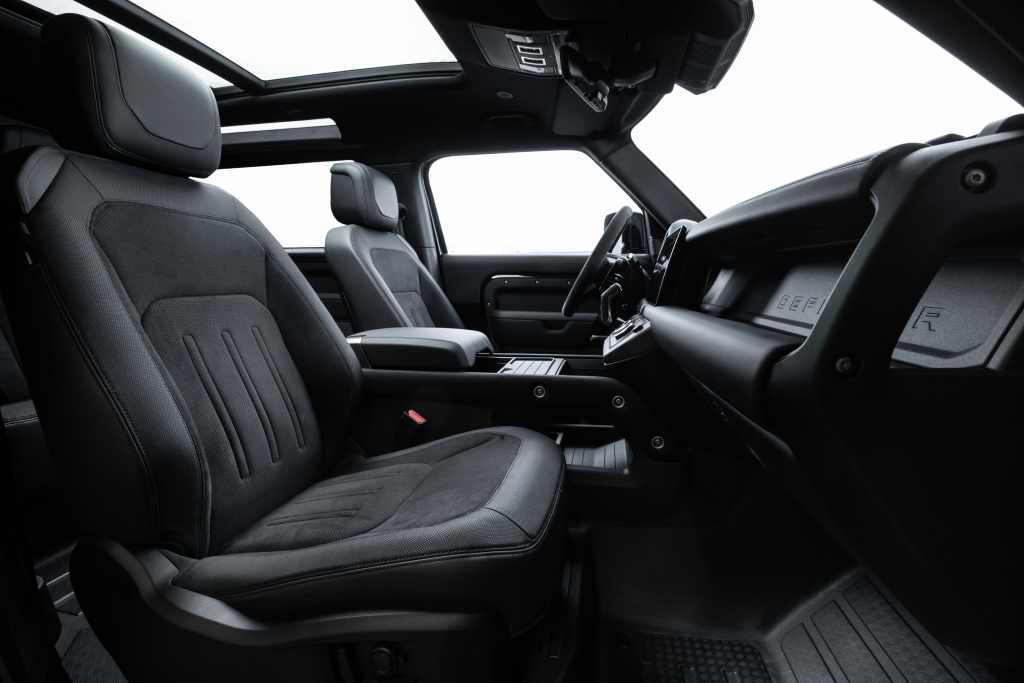 Move up from the base Defender trim to the S equipment line and you’ll gain extra kit such as an armrest and automatic headlights, and there are also clever touches to help you with towing – the on-board cameras assist when lining-up a trailer, while the air suspension can raise and lower to make hitching-up easier. 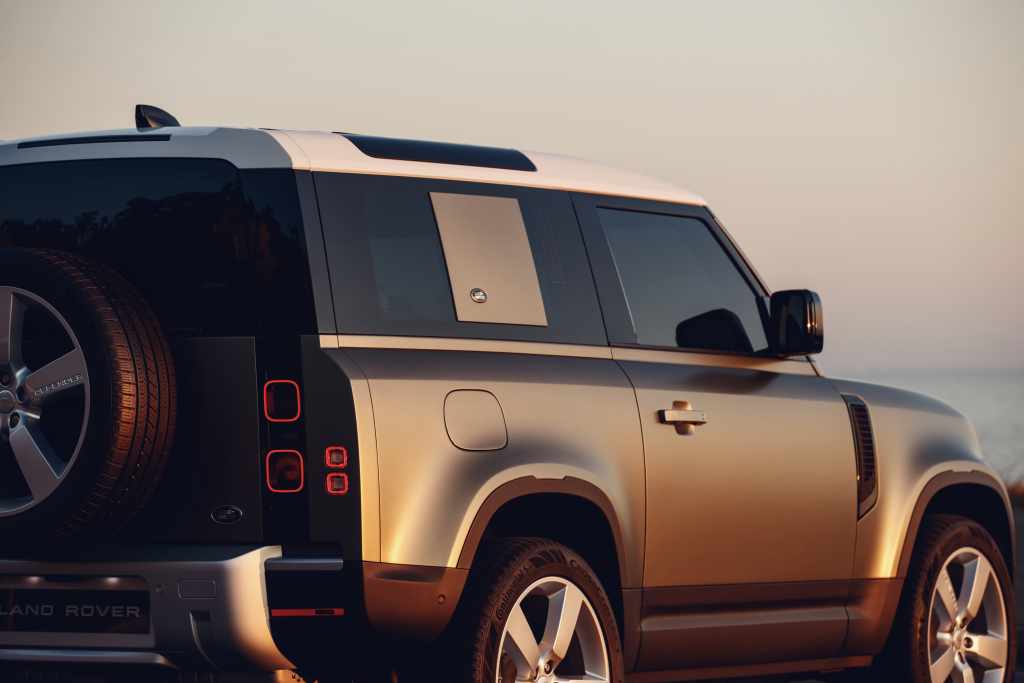 The ClearSight system is another handy addition for Defender drivers and comes with Mirror or Ground functions. The rear-view mirror can be used normally, but is also able to display a rear-facing camera feed when the rear screen is too dirty to see out of. The 10-inch touchscreen also relays camera footage, which can be used to help you see beneath and just in front of the vehicle – invaluable when off-roading.

The Defender 110’s boot space is the most practical. There’s 231 litres with all three rows of seats in place, 916 litres with two rows in the upright position and a van-rivalling 2,233 litres with all but the front seats stowed in the floor. 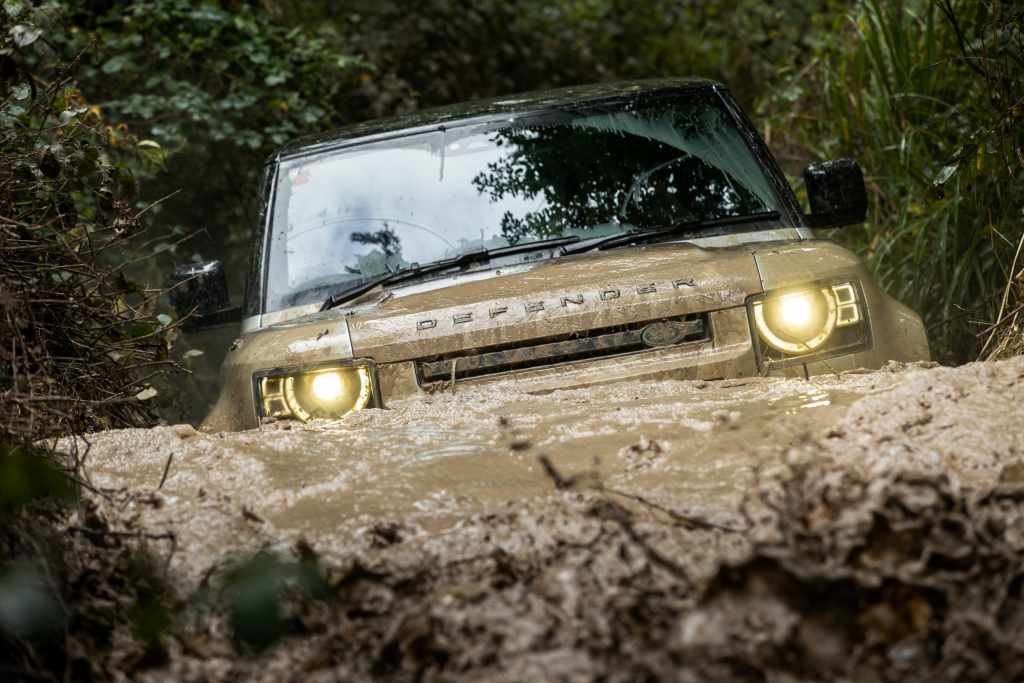 Petrol cars include the 296bhp P300 and 394bhp P400, while a petrol plug-in hybrid unit for the 110 model, the 398bhp P400e, delivers improved economy and lower CO2 emissions. An eight-speed auto transmission is standard across the range. The D240 diesel engine, a popular choice, is stoutly up to the job. The eight-speed auto helps its case thanks to smooth and timely shifts. Acceleration doesn’t feel too hidebound by the weight, at least up to 100km/h. From then on it does definitely feel hidebound by the brick-outhouse aerodynamic profile. It’ll cruise on the motorway.

It’s generally a quiet thing, the engine soft when it’s not worked hard, the tyre and suspension noise pretty distant. Don’t forget that a roof rack and knobbly off-road tyres will add noise and drag, mind.

Overall then, it feels like a heavy luxury crossover. Honest. Then you turn off the road. Suddenly it’s a whole different machine. 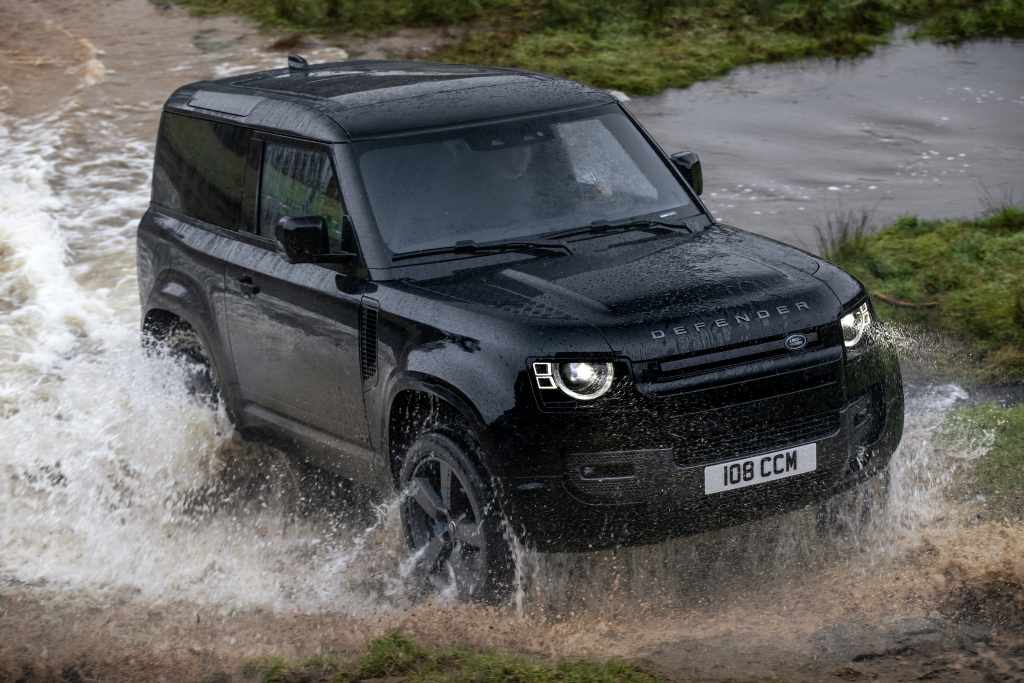 Articulation, traction, wading, ascents, descents, side-slopes, mud, sand. It’s not just that it surmounts and traverses and dismisses all these obstacles, it’s the effortlessness that amazes you. The hardware – axles, springs, anti-roll, gear ratios, diffs, tyres – works as an indefatigable harmonious whole. Overlaid on that is the software, and Land Rover is better at this than anyone. The launch and traction control systems, the slow-speed throttle control, the underbody cameras, they all make your job so much easier.

The most amazing thing about the Defender is it doesn’t feel like a hardcore off-roader. Not when it’s on the road.. 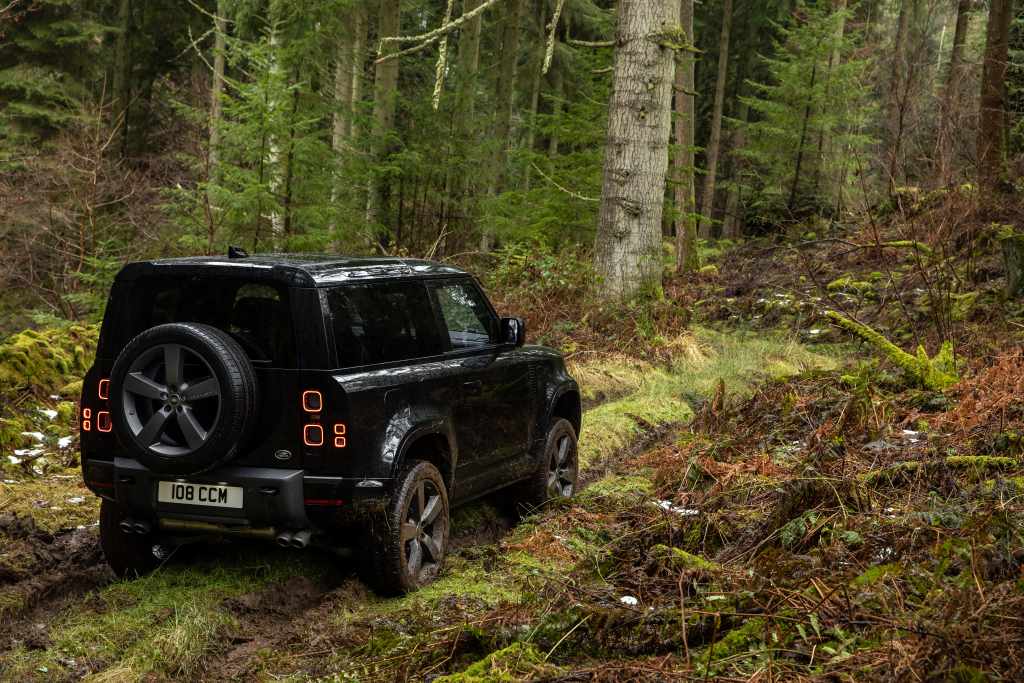 More remarkable, provided you drive smoothly, is its fine control of pitch and roll heave. And you can drive smoothly because the steering is progressive. So you can whisk it along a difficult road at a respectable lick and remarkable comfort. Almost luxury-car comfort.

In the meantime, though it’s a 4X4 with a deep and wide backstory. It just makes you feel adventurous. And when you do use its ability – as an off-roader, a snowy-roader, a towing roader – it’d feel immensely reassuring. It’ll carry mountains of kit, and shrug off the dirt and wet (perfect for Kite surfers or suffers) 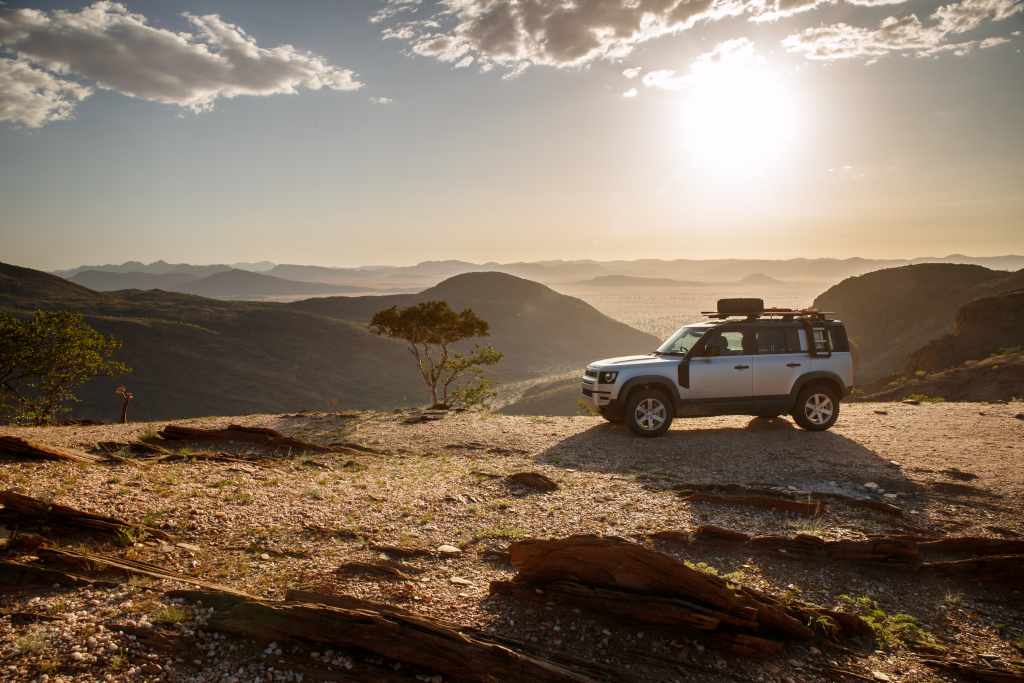 Those same qualities of versatility and ruggedness are equally handy even if you just take a bunch of drunk friends to a club, the monthly grocery shopping, the sports ground.

And the amazing thing is how well it drives. It’s stately and dignified and feels good.

Definitively in love with the new Defender!